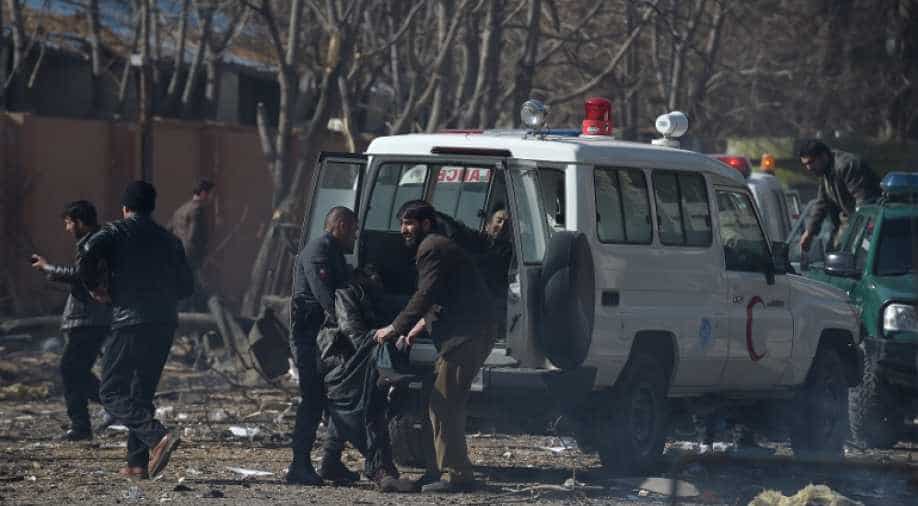 The explosion happened in a busy part of the city where the High Peace Council has its offices. Photograph:( AFP )

Afghanistan Sunday declared a day of national mourning as the toll for those killed by a huge bomb hidden in an ambulance in Kabul topped 100 people and tensions remained high after insurgents struck in the city for the second time in a week.

At least 103 people were killed and 235 wounded in Saturday`s lunchtime attack claimed by the Taliban, which caused panic in the war-torn capital and overwhelmed its hospitals.

Kabul remained on high alert as the presidential palace declared a national day of mourning for Sunday, with flags flying at half-mast. The attack was one of the worst to strike the capital in recent years.

Central Kabul was unusually quiet on Sunday, a normal workday in Afghanistan, with little traffic and few people on the streets.

In contrast, security checkpoints have been beefed up, particularly near the blast scene, as the city braced for the possibility of further violence.

A security alert issued on Sunday warned that the Islamic State group -- which claimed a deadly attack on Save the Children`s office in Afghanistan`s east on Wednesday -- was planning to attack supermarkets and shops in Kabul frequented by foreigners.

US President Donald Trump called for "decisive action" against the Taliban over the assault as other international leaders also condemned the attack.

Afghan authorities gave an updated toll Sunday for those killed and maimed in the huge blast.

"Unfortunately a number of wounded people have died in hospital. The number of martyrs is now 103 and wounded is 235," Interior Minister Wais Barmak told reporters.

Most of the victims were relatives of patients at a nearby hospital, said Mohammad Masoom Stanekzai, the head of Afghanistan`s spy agency, describing the attack as a reaction by the Taliban to losses on the battlefield.

"It does not mean a lapse (in security). We have foiled many attacks, but some are difficult to control," the head of National Directorate of Security told reporters.

Ordinary Afghans took to social media to express their anguish and sorrow at rapidly worsening security as the Taliban and IS militants step up attacks on Kabul, turning it into one of the deadliest places in Afghanistan for civilians.

"We are so heartbroken in Kabul that we don`t know how to start our new day," Freshta Karim wrote on Twitter.

"Shall we stay home or go to work, shall we meet our friends and cry or shall we force ourselves to create an illusion of hope? How are you starting your day in Kabul?"

Naser Danesh tweeted: "In Kabul starting a day without explosion, it would be a surprise. One could only imagine that kind of a day."

On Facebook, Naweed Qaderi wrote: "It is a big shame for the government, they repeatedly fail to protect people. The leaders must lose a son or daughter to feel the pain of poor people."

The blast happened in a crowded area of the city where several high-profile organisations including the European Union have offices.

The force of the explosion shook the windows of buildings hundreds of metres away and caused some low-rise structures in the immediate vicinity to collapse.

The scene of the attack was scattered with body parts, blood and debris. Children were among the wounded. The government has blamed the Taliban-affiliated Haqqani Network, which Afghan and Western officials suspect of involvement in at least some of the recent attacks in the capital.

Police checked the first vehicle and, assuming the two ambulances were together, waved them through, he said.

Both ambulances went to the parking lot of the Jamhuriat hospital. After 20 minutes the suicide attacker drove on to the second checkpoint.

"At the second checkpoint he was recognised and blew (up) his explosive-laden car," interior ministry deputy spokesman Nasrat Rahimi said earlier. He said four suspects had been arrested.

But there is still confusion over the true toll from that attack with conflicting figures given by officials and Afghan media reporting higher numbers.

Stanekzai said five people had been arrested so far over the hotel raid.

Some foreign organisations are reassessing their presence in Afghanistan following the spate of deadly violence.

The Aga Khan Foundation is moving its foreign staff out of the country, several sources told AFP.

At least one Western humanitarian group is relocating its foreign staff to other cities in Afghanistan, a source said.