Jesus walked on this biblical lake - now it needs a saviour 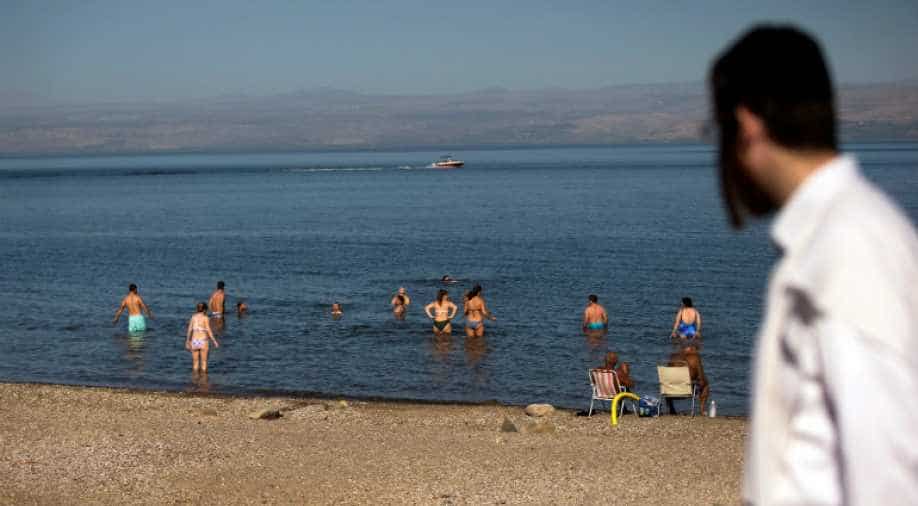 People cool off in the Sea of Galilee in northern Israel, on November 1. Photograph:( Reuters )

The Sea of Galilee is not isolated, it is part of a water basin comprising the Jordan River and the Dead Sea, too. If it shrinks, everything else shrinks faster.

"Shortly before dawn, Jesus went out to them, walking on the lake...
when the disciples saw him walking on the lake, they were terrified
'it's a ghost' they said, and cried out in fear...
but Jesus immediately told them: 'take courage, it is I. Don't be afraid'."

It is a passage from the Holy Bible, Matthew 14:22-36. It tells the story of one of Jesus's most famous miracles.

Some 2,000 years ago, Jesus walked across the Sea of Galilee - the water body between Israel and the occupied Golan heights - according to the Bible. Today, that doesn't require a miracle.

The Sea of Galilee, one of the holiest places in Christianity, is Israel's largest freshwater reserve. But long periods of drought and over-pumping have brought the lake low. A reedy island has materialised at its southern edge, and will soon be a peninsula. Holiday-makers and fishermen teeter over expanding boggy beaches to reach the waterline.

"Because last years we did not have enough rain and also we have a big exploitation water, the water is going slowly down, down, down and we don't know where it will stop," said Meir Sternberg, a local. Rocks are seen above the low-water level of the Sea of Galilee. (Reuters)

The Sea of Galilee was last full in 2004. Today, its shores are six metres wider, just two centimetres from the lowest level ever recorded. If the lake shrinks too much, its water would become saltier and negatively affect animals and plants relying on it.

It is a largely man-made disaster. Drought and overpumping have hit the Sea of Galilee hard.

Israel sees a solution in desalination, in which it is a world leader. It plans to double the amount of Mediterranean seawater it processes and pipe half of it 75 kilometers (47 miles) to the Sea of Galilee.

"(We) are doing it in order to save our nature, to fight global warming, I mean to prevent the effect, the devastating effect of global warming on the Sea of Galilee and also to create a very significant water storage for the entire state of Israel for time of emergencies," said Yuval Steinitz, Israeli energy and water minister.

"If he (Jesus) is coming back, we will make sure that he will have to make a real effort to walk on the water once more," Steinitz joked.

The project requires an investment of more than $600 million.

The problem is larger than Israel - all the fresh water reserves in the region are currently at a 100-year lows.

Finding a common solution is imperative. Man walks towards an island that has materialised at the southern edge of the Sea of Galilee. (Reuters)

The Sea of Galilee is not isolated, it is part of a water basin comprising the Jordan River and the Dead Sea, too. If it shrinks, everything else shrinks faster.

"We need this water, not only for us but also for the Jordanians, because they are in a very very tough conditions now from the water problems point of view," said Giora Shaham, Israel's Water Authority Director.

Until now, desalination and water recycling have been enough to keep the situation under control.

But as Israel enters the sixth year of drought and temperatures keep rising, new efforts are required. Israel's meteorological data shows that the country has become warmer by two degree celsius since the 1980s. When it rains, it rains too little, and the dry and cracked land finds it difficult to absorb rainfall.

Preserving the lake would free Israel to offer Jordan more water under a 1994 peace treaty.

"If there is irreversible damage done to the Sea of Galilee, to the Jordan, to this whole ecosystem, Israel's enemies could use it against her," said David Parsons, vice president of the International Christian Embassy in Jerusalem, which oversees evangelical outreach to Israel.

"It could also affect Christian tourism to the land. It's very good to see Israel taking responsible steps now to address this, finally." Mussels and shells are seen on the ground at a shore of the Sea of Galilee in northern Israel. (Reuters)

Israel's plan provides for piping in 120 million cubic metres annually. Steinitz hopes to see that almost tripled in a cabinet vote next month. Such capacity, he said, would replenish the Galilee by 2026.

He predicted a small bump to consumers' water tariffs, to help defray the $622 million infrastructure cost.

Still, with a national election due in 2019 and an unusually wet winter looming, some worry the Sea of Galilee could be again neglected.