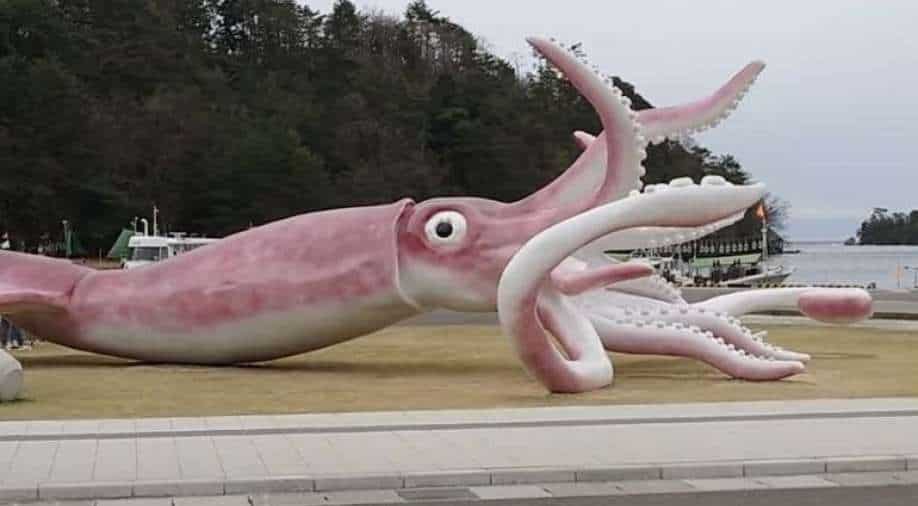 The giant statue of a squid in Japan. Photograph:( Twitter )

Located in Ishikawa prefecture on the Japan Sea coast, Noto spent ¥25m (£164,000) on the 13-metre-long marine creature, according to the Chunichi Shimbun

After spending emergency funds intended for coronavirus measures on a giant statue of a squid to promote the local tourism industry, a coastal town in Japan is facing harsh criticism.

Located in Ishikawa prefecture on the Japan Sea coast, Noto spent ¥25m (£164,000) on the 13-metre-long marine creature, according to the Chunichi Shimbun.

The flying squid was part of a tourism drive to help the area’s virus-hit economy, the newspaper quoted officials as saying.

The pink-and-white creature has flared tentacles. It also has an opening below its beak where people can pose for photographs.

Japan had earlier declared a state of emergency in Tokyo and three other regions, just three months before the country is supposed to host the Olympics.

The country's minister for virus response, Yasutoshi Nishimura, earlier warned of a "strong sense of crisis," saying, current restrictions were not sufficient.

The measure will run from April 25 to May 11, coinciding with the annual Golden Week holiday, Japan's busiest travel period.

Authorities wanted bars and restaurants to stop selling alcohol or close, and to shutter major commercial facilities like malls.

Spectators were also barred from sports events, which can continue behind closed doors, and remote working was encouraged.

Covid surges are placing a major strain on healthcare systems across the world, with no end in sight to a pandemic that has killed more than three million people.