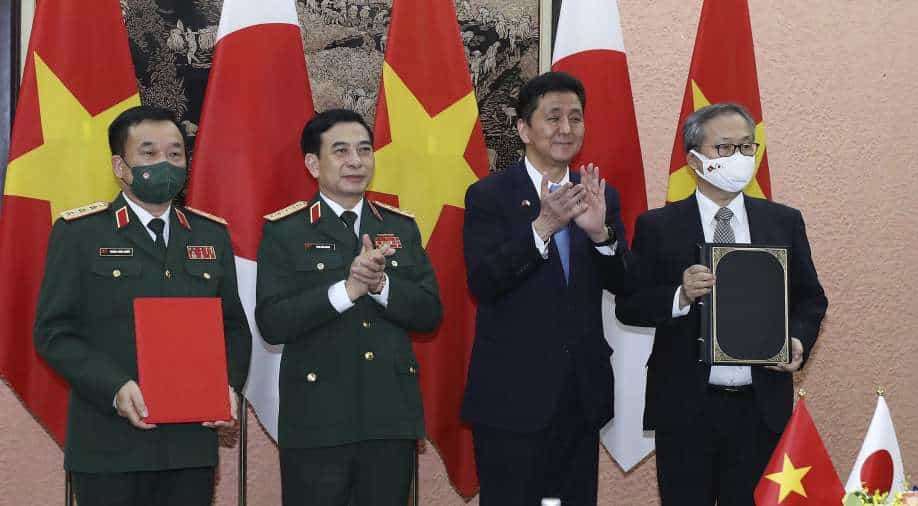 Vietnam, one of the key members of the Association of Southeast Asian Nations, is reportedly the 11th country to sign such an agreement with Japan, at a time when China growing military influence in the Southeast Asian region

In the backdrop of China’s growing assertiveness in the South China seas, Japan and Vietnam signed a new defence deal for the transfer of Japanese-made defence equipment and technology to Hanoi.

The accord was inked in Hanoi on Saturday during Japanese Defence Minister Nobuo Kishi’s first trip overseas after assuming the post last year.

Japan will speed up talks with Vietnam to sell Self-Defence Forces’ vessels, Kishi said in an online press conference, following a meeting with his Vietnamese counterpart Phan Van Giang.

Vietnam, one of the key members of the Association of Southeast Asian Nations, is reportedly the 11th country to sign such an agreement with Japan, at a time when China growing military influence in the Southeast Asian region.

Vietnam has territorial disputes with China over the Spratly and Paracel island groups in the South China Sea.

Japan and China are also embroiled in a territorial dispute, with Tokyo regularly protesting against the Chinese coastguard’s presence in the East China Sea near the Japanese-controlled Senkaku islands, which Beijing also claims and calls Diaoyu.

Vietnam has strong defence ties with Russia and relies on it for most of its equipment, including submarines and fighter jets, as it was part of the former Communist bloc during the Cold War.

Tokyo is also looking to expand military cooperation beyond its longtime ally, the United States, and has signed similar agreements with the United Kingdom, Australia, the Philippines and Indonesia.

“The accord will strengthen Japan’s defence industrial base and is expected to contribute to the country's security," Kishi was quoted by local news outlets in Hanoi.

He added they agreed to work together for a rules-based order and reaffirmed the importance of freedom of navigation and overflight, as well as to abide by international law, in a veiled counter against Beijing.