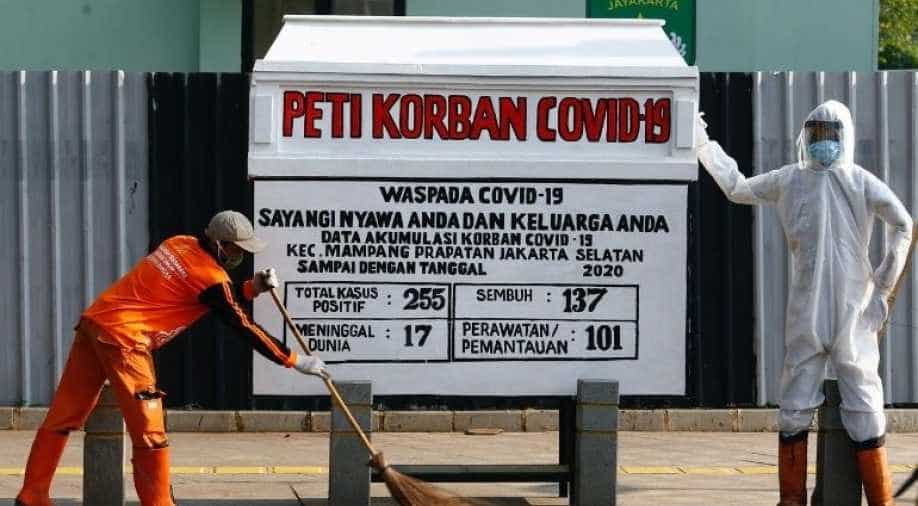 A worker sweeps near a mock coffin and a dummy dressed in a personal protective suit to resemble a health worker, in a public area to warn people about the dangers of the coronavirus disease (COVID-19) in Jakarta, Indonesia, August 19, 2020 Photograph:( Reuters )

Indonesia has come up with a new way to spread awareness about the dangers of COVID-19 pandemic.

Authorities recently started displaying an empty coffin at a bustling intersection in the capital to remind people of the looming invisible danger.

The dummy casket carries the words “COVID-19 victim” in Jakarta, where the country has recorded the highest number of coronavirus cases.

Right next to the dummy coffin can be spotted a mannequin with a protective suit, mask, and a face shield.

Besides being an eye-grabbing message, the board underneath the coffin displays the infection rate and death tally of the district. 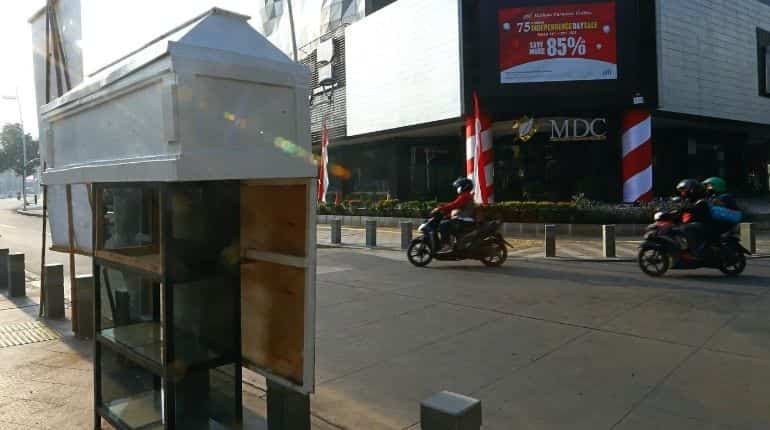 A mock coffin (L) is displayed in a public area to warn people about the dangers of the coronavirus disease (COVID-19) in Jakarta, Indonesia, August 19, 2020.

"Maybe the action taken by the leadership is a bit extreme but this is how we hope to raise awareness," said Djaharuddin, chief of Jakarta's Mampang Prapatan subdistrict, in conversation with Reuters.

Indonesia currently has Southeast Asia’s highest death rate, with over 143,000 infections and 6,200 deaths in the country.

Owing to this, the country’s capital remains largely shut. The city home to over 10 million people has allowed restaurants and public transport to reopen at a reduced capacity, but schools still remain shut.

The city had started easing restrictions in June, with all social distancing measures still in place across the country.

"Setting up the coffin helps people to stay alert of the situation so that they can change their behaviour”, the person added.

Another village on the Java island has undertaken a similar measure, using “ghosts” to patrol the streets. Officials believe that superstition will prevent people from venturing out.

As cases continue to soar in the city, Jakarta’s governor Anies Baswedan said that he was going to pull the “emergency brake” on easing restrictions across the city.

Local media reported that districts in other parts of Jakarta are planning to replicate the faux coffin move to draw people’s attention.