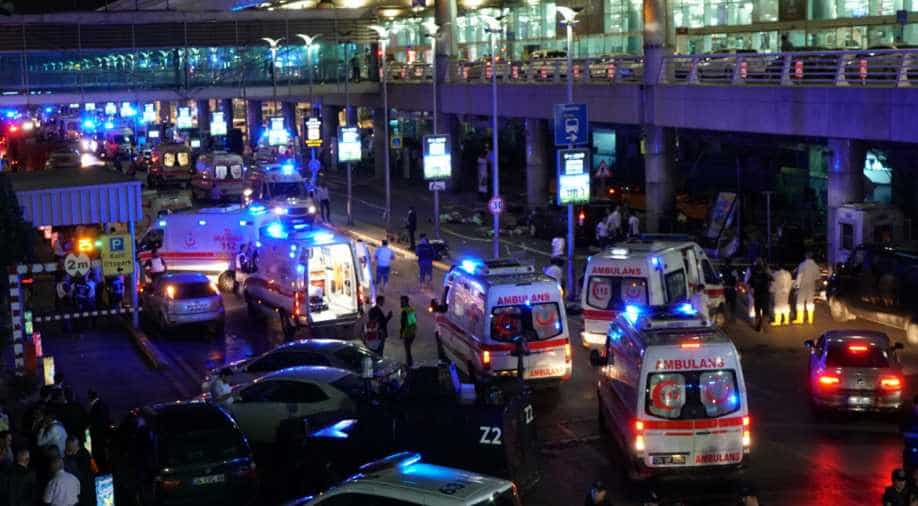 Security and ambulances block the road outside Turkey's largest airport, Istanbul Ataturk, after it was hit by a suicide bomb attack on June 28, 2016, Turkey. Photograph:( Getty )

The death of a Jordanian child brought the toll from this week's Istanbul airport attack to 45, media reported today, as a scare sparked fresh jitters in Turkey's biggest city.

Ankara has pointed blame at the Islamic State group for Tuesday's gun and suicide bomb rampage at Ataturk international airport.

Dogan news agency reported that four-year-old Jordanian national Rayyan Mohammed, one of more than 200 people injured in the attacks, had died in hospital.

The Istanbul governor's office said 52 people were still in hospital, including 20 in intensive care.

The child's death came as a man sparked chaos by shouting "Suicide bomber!" in a crowded Istanbul market on Saturday, with the city still reeling from the attacks.

One woman was lightly injured in the panic in Umraniye, a working-class neighbourhood on Istanbul's Asian side. Police were called to the scene.

The airport carnage was the latest in a string of deadly attacks to hit Turkey in the past year blamed on either IS jihadists or Kurdish rebels.

There has been no claim of responsibility, but officials and analysts say the evidence points to an IS strike.

"It is clear that this was Daesh," Turkish President Recep Tayyip Erdogan said late Friday, using another name for IS.

"Their place is in hell," he added.

Authorities have said they believe the three attackers were a Russian, an Uzbek and a Kyrgyz national.

Anadolu named two of them Friday as Rakim Bulgarov and Vadim Osmanov, without giving their nationalities.

Central Asia's former Soviet republics have been a major source of foreign jihadists travelling to fight with IS and other extremist groups in Iraq and Syria.

Turkish media have identified a Chechen, Akhmed Chatayev, as the mastermind of the attacks, describing him as the head of an IS cell in Istanbul.

He is accused of planning two bombings in the city earlier this year in the Sultanahmet tourist district and the Istiklal shopping street, both of which killed foreigners.