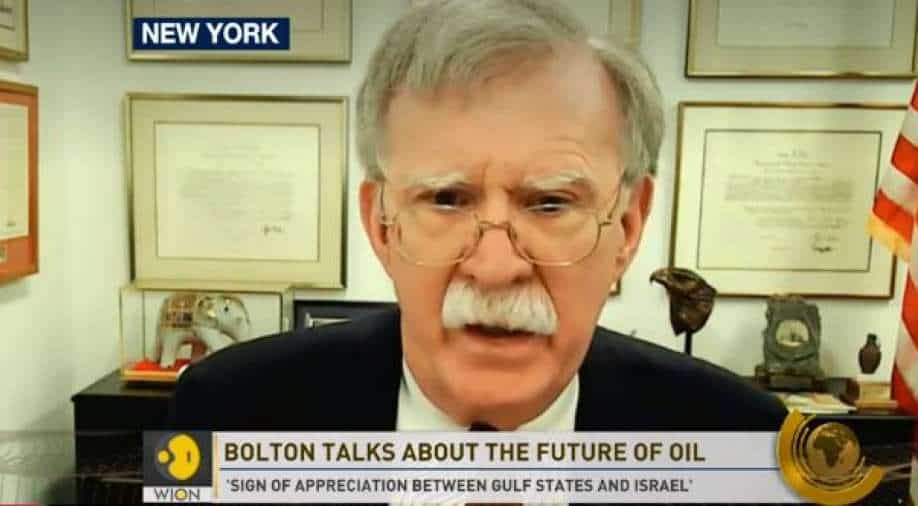 Former US NSA John Bolton, speaking at the WION Global Summit in Dubai, said Russian President Vladimir Putin continues to aspire to “recreate Russian influence equivalent to that of the former Soviet Union” in West Asia.

The reset of ties between Israel and key Arab states is a reflection of the shifting geostrategic tectonic plates in West Asia with Iran being the main focus, former US National Security Advisor John Bolton said at WION Global Summit in Dubai on Wednesday.

"China is a consumer of energy,
it sees the middle east as a source... this is a worrying aspect for countries in South East Asia, " says Former US National Security Adviser @AmbJohnBolton at #WIONGlobalSummit

The rationale of that change is the appreciation between the Gulf Arab states and Israel that “the main threat to regional peace and security is not Israel, it's Iran,” he said.

“Their perception of that threat triggered not just the formal diplomatic exchange, but an intensification of political, military and intelligence cooperation, all designed to protect not just against Iran nuclear threat, but its ballistic missile programme, support for terrorism in the region and beyond, and its deployment of conventional military forces through Iraq, Syria and elsewhere.”

This is a growing, continuing and expanding cooperation, he told the session titled "Peace Deals and the Shifting Sands of West Asia".

“It provides enormous opportunities as well, not just on the military and political side, but on the economic side as well, with joining of Gulf oil revenues with Israeli technology being potentially very significant.”

He pointed out that the potential for stability will bring foreign investment into the region too, making it not just a place whose sovereign investment funds invest around the world, but where more resources will be applied to the Gulf states themselves.

The unspoken question is whether oil resources and natural gas in the region can be used for other things, such as in chemicals and plastics to provide a continuing supply of revenue for the states that have these resources, Bolton said.

He also stressed the importance to guard against the possibility that the oil revenues will fall and not be replaced and generate other economic activity.

Power play in the region

In his address, Bolton briefly surveyed the ongoing power plays in the region.

“Other outside powers will be playing, or certainly aspire to play, a large role in the region. The US, despite the continuing talk about the pivot to Asia, has to play as a power. We are interested everywhere. We're interested in East Asia, South Asia, West Asia, that's not going to go away,” he said.

But other countries have begun to play an important role, and they could significantly “roil the waters in the Middle East,” he warned.

“Russia is already doing it. Over the past years, it has enhanced its position in Syria, it's a surrogate player in the surrogate civil war in Libya.”

Russian President Vladimir Putin, he said, continues to aspire to “recreate Russian influence equivalent to that of the former Soviet Union” in West Asia.

China, being a consumer of energy, sees the Middle East as a source of petroleum that it needs. “It's a worrying aspect for countries in South East Asia and India as China tries to establish hegemony.”

And Turkey under President Recep Tayyip Erdogan, which is conceivably a regional country, is pursuing “Neo-Ottomanist impulses” in Syria and the region, Bolton said.

“It behaved in a way contrary to what its NATO obligations are”, he said, adding that Turkey, with its role in the surrogate war in Libya, is playing a role much larger than in the past.