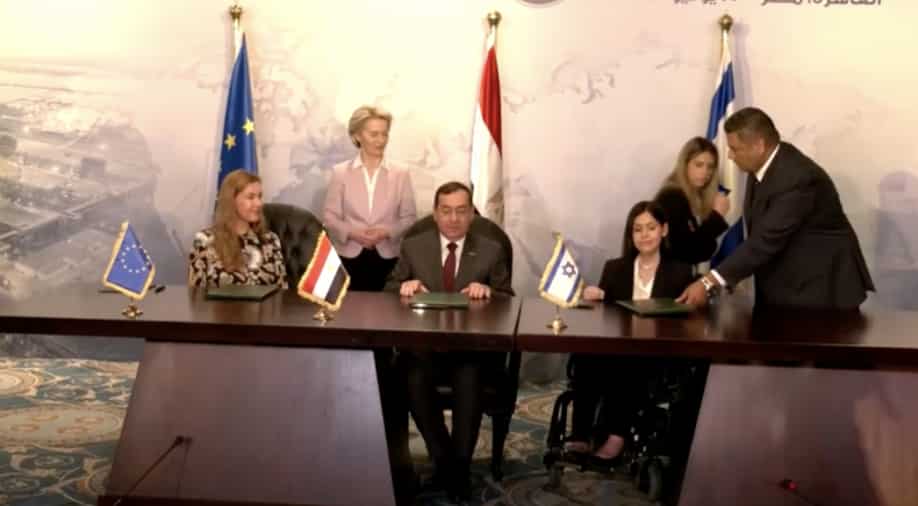 The framework deal signed with the European Union (EU) will be the first to allow "significant" exports of Israeli gas to Europe, Israel's energy ministry said. Under the agreement, the EU will encourage European companies to participate in Israeli and Egyptian exploration tenders.

In order to replace Russian energy imports, Israel and Egypt signed a memorandum of understanding (MoU) on Wednesday with an aim to boost natural gas exports to Europe as supply chain disruptions due to the ongoing Russia-Ukraine war are causing shortages.

The framework deal signed with the European Union (EU) will be the first to allow "significant" exports of Israeli gas to Europe, Israel's energy ministry said. Under the agreement, the EU will encourage European companies to participate in Israeli and Egyptian exploration tenders.

European Commission President, Ursula Von Der Leyen says, “And indeed, we’re experiencing a war on European soil and therefore we are now in the process of completely diversifying our energy supplies away from Russian fossil fuels to other trustworthy suppliers, and you are these trustworthy suppliers.”

Some Israeli gas is already sent by pipeline to liquefaction plants on Egypt's Mediterranean coast, from where it is re-exported as liquefied natural gas (LNG). Officials say they expect shipments of LNG from Egypt to Europe to increase under the agreement, though they have said it would likely take a couple of years before the exports can be significantly expanded.

Ursula says, “And I see it as a first step leading to a Mediterranean-wide agreement because I see that the energy supplies from traditional are from the most Northern part now are shifting towards the global south because you have an abundance of natural resources. You have the sun, you have the wind, you have partially the hydropower, so these are the pre-audition resources that will feed the global clean energy of the future.”
Egypt is also a gas producer, but its exports have been limited by rising domestic demand.

The agreement recognizes that natural gas will have a central role in the EU's energy market until 2030. Following that, the use of natural gas is expected to decline in line with its commitment to becoming a zero-emission economy by 2050.