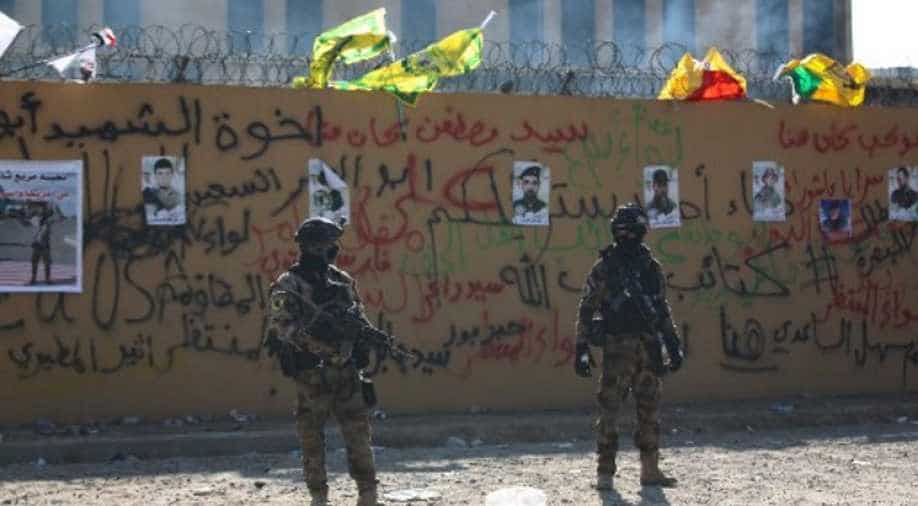 Iraqi security forces stand guard in front of the US embassy in Baghdad Photograph:( AFP )

President Trump had earlier tweeted that Iran will be 'fully responsible' for the embassy attack.

Supporters of Popular Mobilization Forces (PMF) who had stormed the US embassy in Baghdad pulled out of the compound even as the US began sending fresh troops in the region.

PMF said by Wednesday afternoon its supporters had left the embassy after angry demonstrators entered the US compound against the US jets hit Kataib Hezbollah bases in retaliation for missile attacks that killed a US contractor in northern Iraq last week.

The US has deployed 750 additional troops in Baghdad as a result of the crisis, it already has over five thousand troops deployed in the country.

President Trump had earlier tweeted that Iran will be "fully responsible" for the embassy attack. The US president added that he expected Iraq to use its forces to protect the embassy.

Trump and US officials blamed Iran for attacks on US forces and the embassy.

"They will pay a very BIG PRICE! This is not a Warning, it is a Threat," Trump wrote on Twitter, adding "Happy New Year!"

Earlier, hundreds of Iraqi supporters of the Iran-backed Sh'ite militia had stormed into the US embassy in Baghdad. The protesters marched onto the heavily fortified Green Zone and kept walking until they reached the embassy.

The Green zone is a highly secured area in Baghdad and houses most of the embassies and government offices. The protesters chanting "Death to America" entered the US embassy and torched the US flag.

Security personnel could be seen retreating inside of the embassy as demonstrators hurled water bottles and smashed security cameras outside the building. At least twenty people were wounded in clashes with security forces.