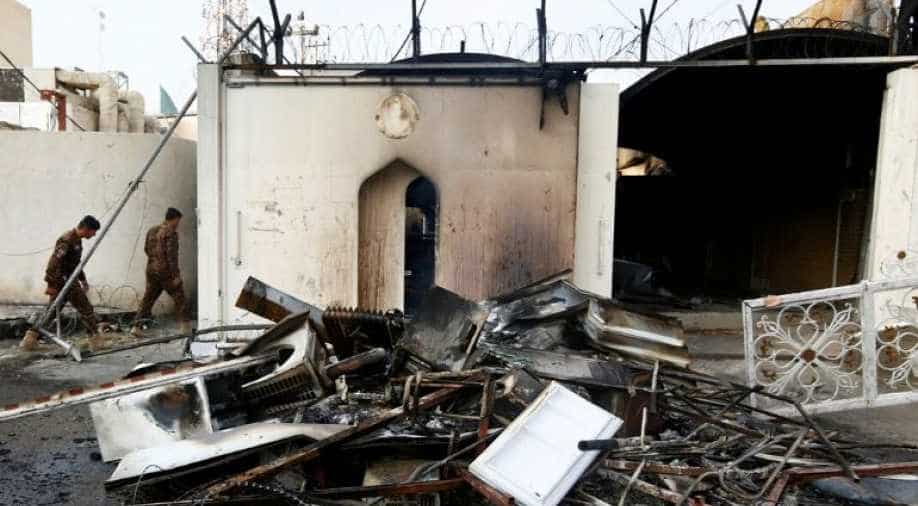 The demonstrator sent a video to Reuters of a doorway to the Hakim shrine blazing as protesters cheered and filmed it on their mobile phones. Reuters could not immediately verify the footage.

Iraqi protesters set fire to the entrance of a shrine in the southern holy city of Najaf on Saturday and security forces fired tear gas to disperse them, police and a demonstrator at the scene said, risking more bloodshed after a rare day of calm.

The demonstrator sent a video to Reuters of a doorway to the Hakim shrine blazing as protesters cheered and filmed it on their mobile phones. Reuters could not immediately verify the footage.

The incident took place during one of the bloodiest weeks of Iraq’s anti-government unrest, which erupted last month. On Friday, Prime Minister Adel Abdul Mahdi promised to quit to try to stem the violence and public anger.

Demonstrations continued elsewhere including the southern city of Nassiriya where protesters earlier surrounded a police station and in Baghdad. But there were far fewer reports of casualties than on the previous two days, when scores were killed nationwide in the Iraqi capital and the south in clashes with security forces.

Abdul Mahdi's resignation announcement came hours after a call from Iraq's top Shi'ite Muslim cleric for the government to step down to end the unrest. The burning on Wednesday of the Iranian consulate in Najaf, the seat of Iraq's influential Shi'ite clergy, only deepened the crisis.

The unrest, which has killed more than 400 people, mostly demonstrators, amounts to the biggest challenge for Iraq since Islamic State insurgents seized vast swathes of Iraqi and Syrian territory in 2014.

It pits mostly young, disaffected Shi’ite protesters against a Shi’ite-dominated government backed by Iran and accused of squandering Iraq’s oil wealth while infrastructure and living standards deteriorate. Some anger has been directed at religious authorities which many protesters view as part of an out of touch ruling elite.

Security forces have used live ammunition, tear gas and stun grenades against protesters for nearly two months. Scores of the more than 400 dead have been killed in recent days, particularly in the southern cities of Nassiriya and Najaf.

At a funeral procession for protesters killed this week in Najaf, a Shi’ite holy city, a mourner who declined to give his name said: “This man was protesting holding an Iraqi flag and a flower. He was shot dead. He’s a sacrifice for the nation.”

Iraq’s cabinet approved Abdul Mahdi’s resignation, his office said in a statement on Saturday, but parliament has yet to withdraw its support for the prime minister at a session on Sunday, making it official.

“The government has done all it can to respond to the demands of protesters and enact reforms ... and calls the parliament to find solutions (to unrest) in its coming session,” the statement said.

Abdul Mahdi’s government, including himself, will stay on in a caretaker capacity following the lawmakers’ vote until a new government can be chosen, the prime minister said later on Saturday in a televised cabinet meeting.

“This is a positive thing ... it show’s were no longer a dictatorship - governments do resign, and this is how authority is in democratic countries,” he said.

He added that President Barham Salih would then need to name a new premier for approval by parliament.

Iraqi protesters have welcomed the resignation but say it is not enough. They demand the overhaul of a political system they say is corrupt and keeps them in poverty and without opportunity.