Iraq prepares for the Pope's visit amid scars of war 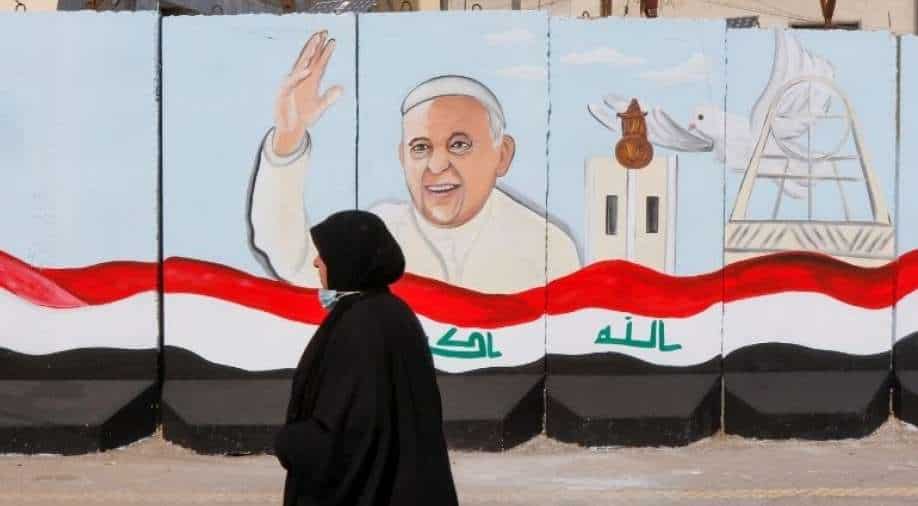 A woman walks near a mural of Pope Francis on the wall of a church upon his upcoming visit to Iraq, in Baghdad, Iraq Photograph:( Reuters )

Pope Francis is set to embark on a historic trip to Iraq, the first-ever papal visit to the country.

Basra's Archbishop Habib al-Naufaly stressed the symbolic importance of the pope's March 5-8 visit as Iraq is still recovering from the war against the Islamic State that destroyed scores of Christian heritage sites.

He will hold an inter-religious prayer service at the ancient Mesopotamian site of Ur when he visits Iraq next week - an event local archaeologists hope will draw renewed attention to the place revered as the birthplace of Abraham.

It is the site where Abraham, the father of three religions, Judaism, Christianity and Islam, is thought to have been born.

The inter-religious prayer service will be attended by Christians, Muslims, Mandaean-Sabaean, Yazidi and other religious minorities present in Iraq.

The focus will be on harmony between religious groups in a service the Vatican has named "Prayer for the sons and daughters of Abraham".

Popular with Western visitors in the 1970s and 1980s, Ur is scarcely visited today after decades of war and political instability shattered Iraq's international tourism industry. The coronavirus crisis now also keeps local tourists away.

Located about 300 km (200 miles) south of the capital Baghdad, the site comprises a pyramid-style Ziggurat and an adjacent residential complex as well as temples and palaces.

It was excavated about 100 years ago by Leonard Woolley, a Briton who recovered treasures rivalling those found in Tutankhamen's tomb in Egypt. But little work has since been done on one of the world's oldest cities, where urban dwelling, writing and central state power began.

However, the focus of the visit will be a groundbreaking meeting with Iraq's top Shi'ite Muslim cleric. The pope will meet ayatollah Ali al-Sistani.

The private meeting is a very significant one, in a country with a dwindling Christian population.

What do Iraq's Christians think about the visit?

Several Christians in Iraq fled the country after the US-led invasion while others left during the sectarian bloodshed.

The last two decades have hollowed out Iraq's Christian community, a community that dates back two millennia.

Iraq's Christian community is one of the most diverse in the world featuring branches like Chaldean, Armenian orthodox and protestant.

In 2003, there were nearly 1.5 million Christians in Iraq, which was nearly 6 per cent of the country's 25 million population.

But as Iraq's population mushroomed, the number of minorities shrunk, today only 400,000 Christians remain.

According to Saad Hormuz, a 52-year-old Iraqi Christian refugee in Jordan, "When I left Iraq, it was a very difficult decision to make. But I was forced to make it because of how sad I was about my country, which was turning into a place we couldn’t be or live in."

In Iraq's capital, a thriving Christian population has shrunk by almost 90 per cent. Most of them migrated to neighbouring nations while others resettled in countries like the United States and Australia.

Many fled to escape the war and when they returned, militiamen had occupied their homes. Some even found that their homes had been secretly sold, using fabricated deeds.

"Most of the Christians, who left Iraq due to the sectarian situation and violence, have left their homes under the protection of their neighbours, while others have closed their doors with the hope of returning after the situation stabilises," said William Warde head of the Hammurabi human rights organisation.

Getting those homes back is a dizzying bureaucratic process that usually ends in failure. Mediation efforts often end in death threats and a rigged legal system favours the majority.

The pope's visit might put the spotlight on Iraq's Christians and their troubles. But most of them remain cynical as they say the space for minorities is shrinking and there's very little that the pope can do.