Some countries will not have it easy if clues found on creating unrest in Iran: Vice President Jahangiri 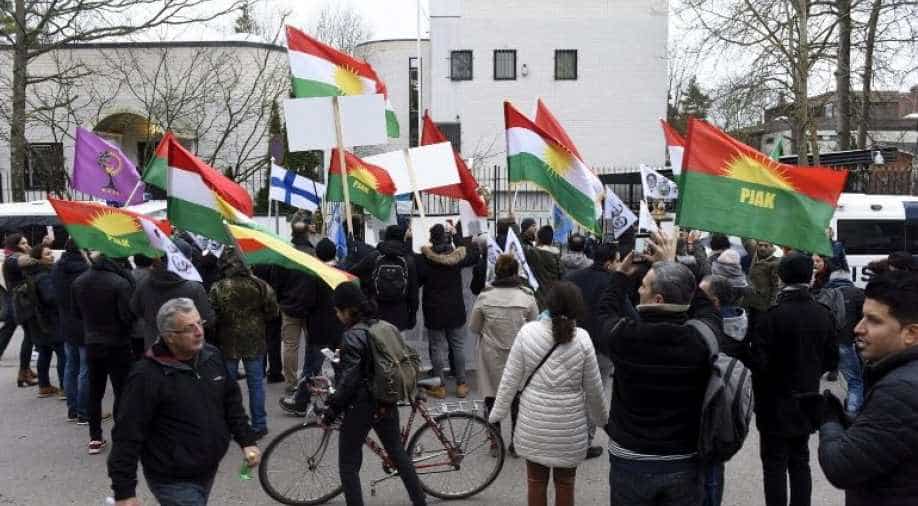 FILE PHOTO: People attend a protest to support the demonstrations in Iran against the rise in gasoline prices outside the Embassy of Iran in Helsinki, Finland.  Photograph:( Reuters )

About 1,000 demonstrators have been arrested, Iranian media said nearly a week ago

Iranian Vice President Eshaq Jahangiri on Saturday warned regional countries of consequences if it is proven that they meddled to stoke recent unrest in Iran.

"Some countries in the region should know that they will not have an easy life in the region if clues are found that show they intervened to create unrest in Iran," said Jahangiri, quoted by the semi-official news agency Fars.

Iran has blamed "thugs" linked to exiles and foreign foes - the United States, Israel, and Saudi Arabia - for stirring up unrest following hikes in gasoline prices which led to some of the worst violence in a decade.

Iran's regional rival Saudi Arabia and its arch-foe Israel have backed US moves to reimpose sanctions that have crippled Tehran's economy after Washington withdrew from the Islamic Republic's 2015 nuclear deal with world powers.

Meanwhile, police said 180 "ringleaders" of the unrest had been detained by its agents across the country, state television reported. On Friday the judiciary said the Revolutionary Guards had arrested about 100 leaders of protests.

About 1,000 demonstrators have been arrested, Iranian media said nearly a week ago.

The Center for Human Rights in Iran, a New York-based advocacy group, said on its website that a tally based on official figures and credible reports suggested that "a minimum of 2,755 people have been arrested with the actual minimum number likely being closer to 4,000".

Iranian troops and members of the elite Revolutionary Guards helped police quell violent unrest in Kermanshah province this week, Iranian officials said on Saturday, accusing "US agents" of being among the armed protesters.

The unrest appears to be the worst violence at least since Iran stamped out a "Green Revolution" in 2009 when dozens of protesters were killed over several months.

Rights group Amnesty International said at least 30 people were killed in Kermanshah, making it the worst-hit by the protests and it updated its death toll to 115 from 106.

He did not name the groups. Armed Iranian Kurdish militants have long operated near the province's border with Iraq.

Guards spokesman Brigadier General Ramezan Sharif said the protests had been initiated by royalists seeking the return of the Pahlavi dynasty toppled by the 1979 revolution, and the exiled Mujahideen Khalq armed opposition group, Tasnim reported.

He said "secessionist" groups were also involved, apparently referring to ethnic Arab and the Kurdish militants.

Protests began in several areas on November 15 after the government announced gasoline price hikes of at least 50 per cent and imposed rationing. The unrest spread to at least 100 towns and cities as demonstrators demanded senior officials step down.

Iran condemned the US decision to impose sanctions on the Iranian information minister on Friday for his role in a nationwide internet shutdown meant to help stifle the protests.

"Everyone knows that the current US administration does not value the principles of democracy, transparency and human rights, including freedom of the internet, for others," Foreign Ministry spokesman Abbas Mousavi said, according to state media.

On Thursday, Iran's National Security Council that had ordered the shutdown approved reactivating fixed-line internet in some areas after a five-day outage.

The restoration of the internet, slow on the first two days, sped up on Saturday, with observatory NetBlocks indicating that network data showed connectivity was up to 72 per cent of normal levels.