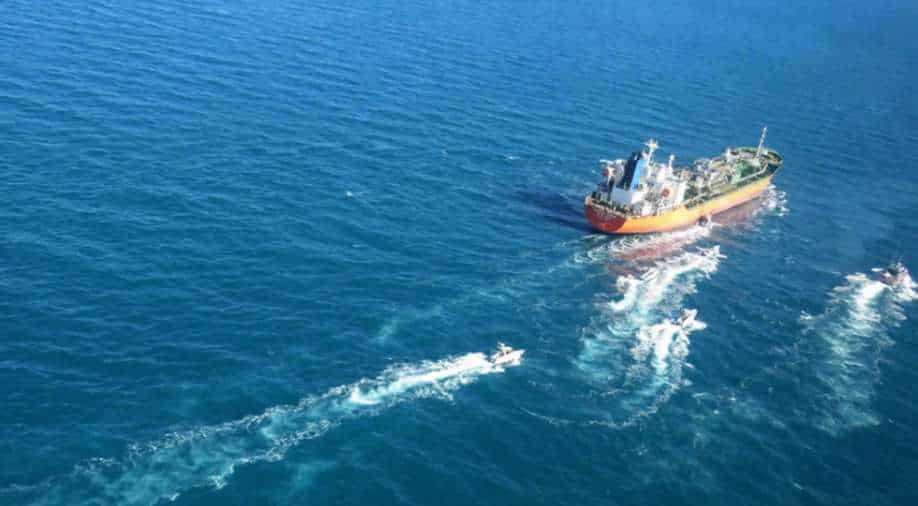 The Islamic Revolutionary Guard Corps seized the Hankuk Chemi and arrested its multinational crew near the strategic Strait of Hormuz on January 4, saying it had polluted the waters.

Iran said on Tuesday it has allowed about 20 crew members of a South Korean tanker seized almost a month ago for alleged pollution to leave the country in a "humanitarian move".

The Islamic Revolutionary Guard Corps seized the Hankuk Chemi and arrested its multinational crew near the strategic Strait of Hormuz on January 4, saying it had polluted the waters.

The development came as Tehran urged Seoul to released billions of dollars of Iranian assets frozen in South Korea due to US sanctions.

"In a humanitarian move by Iran, the crew of the South Korean tanker accused of polluting the environment of the Persian Gulf were allowed to leave the country," foreign ministry spokesman Saeed Khatibzadeh said in a statement.

The permission for them to leave had been granted upon "the request of the South Korean government and (with) the cooperation of the judiciary in Iran", he added.

He did not specify whether the crew had already left.

The case of the tanker and its captain were still being reviewed, he added, without elaborating.

The arrested crew were from South Korea, Indonesia, Vietnam, and Myanmar.

Former US president Donald Trump in 2018 withdrew Washington from a landmark nuclear agreement with world powers and then reimposed and reinforced crippling sanctions on Iran.

Iran was a key oil supplier to resource-poor South Korea until Washington's rules blocked the purchases.

According to government spokesman Ali Rabiei, Iran has $7 billion of funds blocked in Seoul.

The money can neither be transferred nor earn interest, yet Iran is charged fees on it, he has said.

Iran has on various occasions denied the seizure and the funds are linked.

According to Khatibzadeh, Iran's deputy foreign minister Abbas Araghchi was told during a Tuesday phone call with a South Korean counterpart that Seoul was putting in its "maximum effort" to release the funds as soon as possible.

South Korean Deputy Foreign Minister Choi Jong-kun had visited Tehran last month on a long-planned visit, and discussed both the tanker's and the funds issues.

He met with Foreign Minister Mohammad Javad Zarif, who told him that "restrictions" on Iranian funds were the "biggest obstacle" to their bilateral relations in the current situation, as reported by Iran's official news agency IRNA.

Tehran had warned in January its seizure of the tanker must not be politicised, after the United States and France urged the Islamic republic to release the ship.

The Hankuk Chemi incident was the first seizure of a major vessel by Iran's naval forces in more than a year.

In July 2019, the Guards seized the British-flagged oil tanker Stena Impero in the Strait of Hormuz for allegedly ramming a fishing boat. They released it two months later.

At the time it was widely seen as a tit-for-tat move after authorities in the British overseas territory of Gibraltar detained an Iranian tanker and later released it, despite US objections.

The Guards seized at least six other ships in 2019 over alleged fuel smuggling.