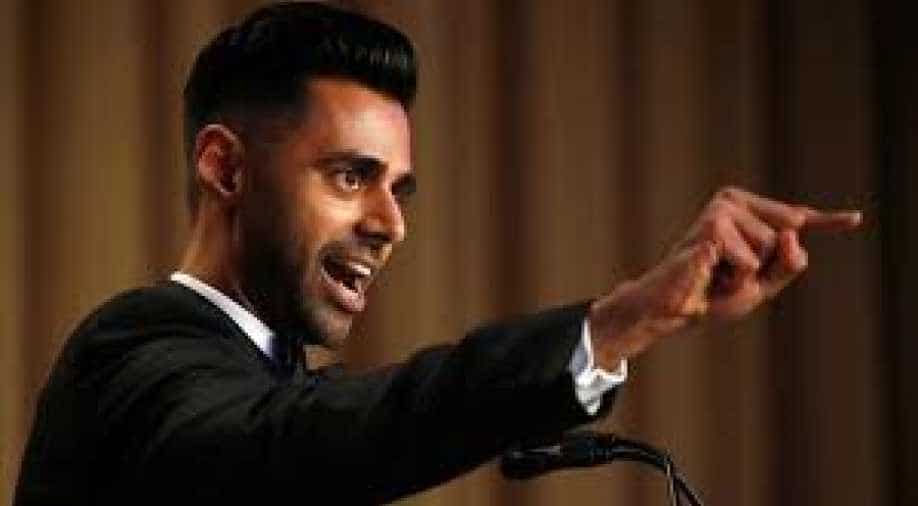 Though Trump decided to skip the event, and in hindsight a wise decision, Minhaj chose to take scathing potshots at the president.

Following are some of the biting remarks aimed at Trump.

"I would say it is an honour to be here, but that would be an alternative fact. It is not. No one wanted to do this. So of course it lands in the hands of an immigrant.

Don Rickles died just so you wouldn't ask him to do this gig, all right? RIP to Don Rickles, the only Donald with skin thick enough to take a joke like that."

Minhaj, who is a senior correspondent for The Daily Show, also revealed that he was asked to not make fun of the current administration.

But he decided to flay Trump and his team as he did not want to be one of those immigrants who wanted to "fit in".

" We have to address the elephant that's not in the room: the leader of our country is not here. And that's because he lives in Moscow; it is a very long flight. It would be hard for Vlad to make it. Vlad can't just make it on a Saturday. As for the other guy, I think he's in Pennsylvania because he can't take a joke.

There was also another elephant in the room, but Donald Trump junior shot it and cut off its tail."

He also imbued sarcasm in his nearly 26-minute long speech which especially came to the fore when he saw logic and comfort in watching Trump play golf instead of being present at the White House.

"A lot of people in the media say that Donald Trump goes golfing too much – which raises a very important question: Why do you care? Do you want to know what he's not doing when he's golfing? Being President. Let the man putt-putt. The longer you keep him distracted, the longer we're not at war with North Korea."

Minhaj trained his gun at White House chief strategist  Steve Bannon as well, proving no-one in the Trump camp was beyond derision.

"Now a lot of people think Steve Bannon is the reason Donald Trump dog whistles to racists. And that is just not true. Ask Steve Bannon."

He further said: "This has been one of the strangest events I've ever done in my life. I'm being honest with you. I feel like I'm a tribute in  The Hunger Games. If this goes poorly, Steve Bannon gets to eat me."

Trump, who became the first president to skip the correspondents' dinner since Ronald Reagan did in 1981, was addressing an election campaign-styled speech in Harrisburg, Pennsylvania, to mark his 100th day in office.

The 70-year-old president took time out to take a dig at the dinner.

"A large group of Hollywood actors and Washington media are consoling each other in a hotel ballroom in our nation’s capital right now.

And I could not possibly be more thrilled than to be more than 100 miles away from Washington’s swamp, spending my evening with all of you and with a much, much larger crowd and much better people, right?"