In Turkey’s safe zone in Syria, security and misery go hand in hand 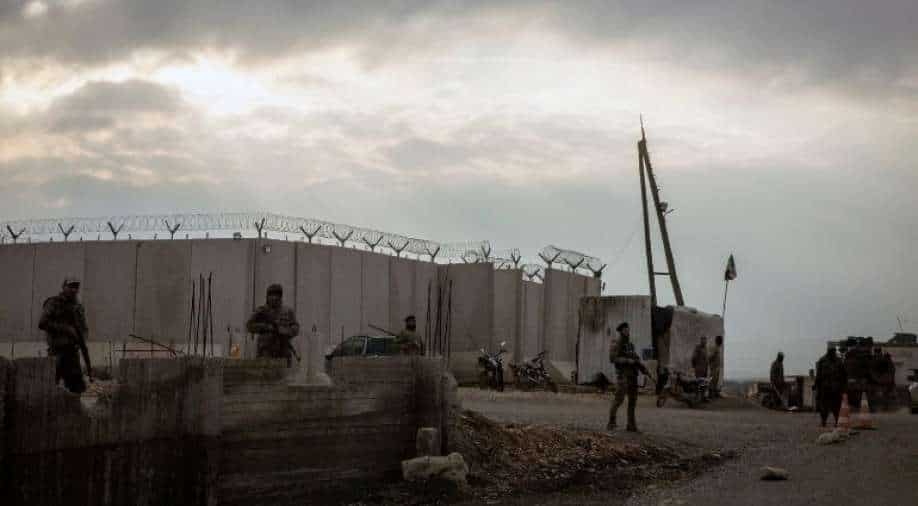 Turkish-backed Syrian security forces maintain checkpoints and bases on the road between Afrin, Syria, and the Turkish border on Feb. 1, 2021. Three years ago, Turkey was widely criticized when it sent forces into Syria. But today, the Syrians they protect are glad the Turks are there, despite their hardship. (Ivor Prickett © 2021 The New York Times) Photograph:( The New York Times )

The Turkish intervention in Afrin was not selfless. Turkey always had its own interests in mind

In a tented camp on a hilltop above the city of Afrin, 300 Syrian families struggle to keep warm in the rain and mud. Displaced three times since they fled their farms near Damascus seven years ago, they survive on slim handouts and send the children out to scavenge.

“The situation is very bad, rain comes into the tent,” said Bushra Sulaiman al-Hamdo, 65, lifting the ground sheet to show the sodden earth where her bedridden husband lay. “There’s not enough food, there is no assistance organization, no drinking water.”

President Recep Tayyip Erdogan of Turkey was widely criticized by the United Nations and Western leaders three years ago when he ordered Turkish troops across the Syrian border into Afrin, an action seen as opportunistic and destabilizing. Thousands of Kurdish families fled the Turkish invasion, along with the Kurdish fighters. In their place came hundreds of thousands of Syrians from other areas, who have swollen the population, taking over homes and camping on farming land.

But as an end to the decadelong Syrian civil war still confounds the world, Turkey has become the only international force on the ground protecting some five million displaced and vulnerable civilians. Today, the Turkish soldiers are all that stand between them and potential slaughter at the hands of President Bashar Assad’s forces and those of his Russian allies.

Turkish officials recently escorted journalists on a rare visit to Afrin, a district of northwestern Syria, where Turkey has created its own de facto safe zone along the border. The Turks were keen to show their achievements in infrastructure, education and health services.

But they also did not hide the continuing plight of the Syrians under their charge, who despite their evident hardship made clear that they were glad the Turks were there, at least for now.

“Here, at least I can stay alive,” said Amar Muhammad, 35, a porter in the market in Afrin. A former rebel fighter from Damascus, he said he risked death or detention by the Syrian government. “There, I would be dead. There, I would be thinking all the time, ‘Will they arrest me?’”

The Turkish intervention in Afrin was not selfless. Turkey always had its own interests in mind. Its main aim was to root out Kurdish forces it considers a security threat and provide a space for the residual rebel forces fighting against Assad, a loathed rival. The Syrians who settled around Afrin have fled Syrian government forces.

Muhammad and his cousin Muhammad Amar were among the rebel fighters evacuated in a convoy of buses from the Damascus suburb of Ghouta and brought to Afrin under a peace deal arranged between Russia and Turkey three years ago.

“We were forcibly displaced,” Muhammad said. Refused a chance to join the Turkish-backed security forces, they were demobilized and left to make a living how they could. “I swear to God some people go to sleep hungry. We don’t know how we are surviving.”

Turkey has set up its own administration, trained and incorporated friendly Syrian militias into a military police force and set up compliant local Syrian councils to run things. The city has been connected to the Turkish electricity grid, ending years of blackouts; uses Turkish cellphones and currency; and has registered 500 Syrian companies for cross-border trade.

“Our main aim is to make their life more normal,” said Orhan Akturk, deputy governor of the adjoining Turkish province of Hatay, who is also responsible for Afrin. “Keep schools open, and hospitals working so people can resume their lives.”

But Turkey is also in Syria so that the Syrians do not end up in Turkey. Already the host of the largest Syrian refugee community in the world — 3.6 million Syrians are registered inside Turkey — Erdogan has long called for the establishment of a no-fly zone, or an internationally protected safe zone, in northern Syria.

As it stands, his forces have carved it out for themselves. While the U.N. supplies much of the assistance to the Syrians, Turkey has forced out many international aid groups to keep closer control itself.

Turkey first intervened in Syria in 2016 in a joint operation with the U.S. Army against the Islamic State group, then in Afrin in 2018, and again in 2019, after then-President Donald Trump abruptly withdrew U.S. forces from the region.

Erdogan’s agreement with Trump allowed Russia and the Syrian government to regain a footing in northeastern Syria, which was disastrous for the opposition. But then Ankara took an unexpected stand against a Russian and Syrian government offensive last year in the province of Idlib, showing the Turkish military was not only willing but able to defend the line.

Setting a red line in Idlib turned Turkey from a bad actor in the region to a good one, or at least one that shares mutual interests with Washington, said Mouaz Moustafa, executive director of the Syrian Emergency Task Force, a Washington-based organization involved in advocacy for Syria.

He called for the Biden administration to restart military-to-military communication with Turkey and provide it with logistical and intelligence support to bolster its defense of the part of Idlib that is still in rebel hands.

“Northwest Syria and Idlib is key to the whole,” he said. With 4 million people, 1 million of them children, crammed into an ever shrinking space, Idlib represents both a humanitarian and strategic necessity, he said. “Idlib alone, if attacked, would double the refugees in Europe.”

The Turks’ control, though welcomed by many Syrians who have fled from Assad’s government, is not uncontested. Turkey’s task in Afrin, in fact, has since been bedeviled by persistent terror attacks — 134 in 2 1/2 years — including four car bombs in the region this month. Security forces have thwarted hundreds more, Akturk said.

The Turkish police chief in Afrin said 99% of the attacks were the work of the PKK, the Kurdish separatist movement, and its affiliate in Syria, the YPG, which is allied with U.S. forces in combating the Islamic State.

The recent car bombs were concealed in trucks brought in from the Kurdish-controlled area of Manbij by unwitting traders, one of whom lost his own son in an explosion in Afrin’s industrial area, Akturk said.

Turkey will raise the issue of U.S. support for the Kurdish militia as a priority with the Biden administration, Defense Minister Hulusi Akar said last week.

In Afrin the Turks have handled security like any NATO force, surrounding their administration building with high concrete blast walls and sealing off a “green zone” that encompasses the main shopping street in the center of the city.

The Syrian shopkeepers complain that business has dwindled as a consequence.

“We are surviving, but it is very difficult,” said Ibrahim Haji Khalil, owner of the Five Stars Ice Cream shop. Customers dropped dramatically after a massive fuel truck bomb hit the market last April, he said. “We used to have people in lines up the street but now there is no one.”

Said Sulaiman, the leader of the local council, pleaded for more assistance beyond what Turkey can provide. “We need more international support and more nongovernmental organizations to help,” he said.

For millions though, Turkey offers the only opportunity.

Syrian students are busy learning the Turkish language and seeking ways to get to Turkey to study or work, said Nour Hallak, a Syrian activist living in the Turkish-controlled part of Aleppo province. “It’s something that makes me laugh and cry at the same time,” he said. “Turkish language is spreading, it’s the choice of the people.”

For the families in the tented camp above the city, seeking protection from Turkey was their only option.

“We are 16 in one tent. Everything is very hard, to find wood, and food,” said Rasmia Hunan al-Abdullah, carrying a toddler in her arms. Her husband is bedridden and blind, she said. “Sometimes the children work and collect plastic.”

Families pressed forward asking for help in tracing relatives detained in the vast Syrian government prison system. Almost everyone had a family member detained by the Assad government, the camp organizer said.

“If we were not scared, we would not have come here,” said Jarir Sulaiman, one of a group of elders leaning on canes outside their communal tent.

Once a wealthy landowner, he said the Syrian government had cut down his olive groves after seizing control of their village, Khiara, south of Damascus. He ruled out returning home while Assad remained in power.

“We won’t go back to our villages until Turkey gives us protection,” he said. “Without the Turks we cannot survive.”