In pics: Tennis ball-sized hail hits parts of Queensland ahead of flash-flood warning 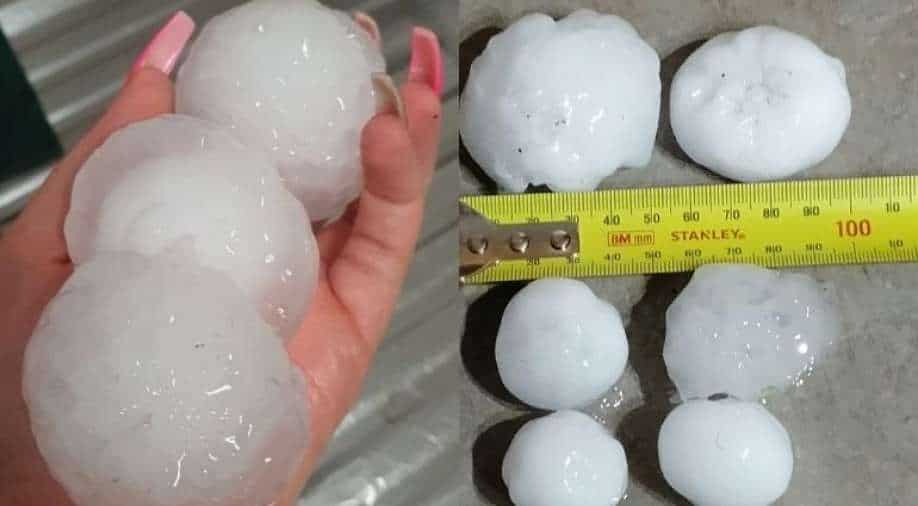 'Some of these storms are fast-moving and fast-forming, so people should consider whether they need to be outside or on the road at the moment,' officials warned residents

Australia has just come out of a lockdown and now a warning of flash flood followed by continuous rains and hail storms has forced the residents back in their houses again for the next few days.

The local residents of Queensland heard pitter-patter on Saturday only to step out and realise it was a hailstorm, with the hailstones as big as a tennis ball, quite literally, and the Bureau of Meteorology warned that more of such hailstorms were expected.

We'll that was a Queensland hail storm pic.twitter.com/50sTWSS5fC

This was a result of thunderstorms that were formed along the Great Dividing Range from the New South Wales border to Wide Bay, north of the Sunshine Coast before moving towards the coast through the afternoon. The experts have warned that these storms will move and form quicker, and have urged people to stay indoors as much as possible. “The situation is volatile and continuing to change quickly,” a spokesman said. “Some of these storms are fast-moving and fast-forming, so people should consider whether they need to be outside or on the road at the moment.”

“These thunderstorms are a significant threat to property and life,” the bureau tweeted.

The locals took to the social media platforms to share pictures and videos of the hailstones which were as big as a tennis ball.

The storm is here most of the chickens are away Sydney retreated to under the house with the turkey who’s been here the last 4 days visiting and here’s a video of the hail coming down pic.twitter.com/JZdD9OajeT

The biggest hailstone reported was of 14cm and was located in Logan, south of Brisbane, and locations such as Ipswich and the Lockyer Valley, west of the city reported up to 7cm.

“We don’t often see severe storms on this scale,” the meteorologist Lauren Pattie told local reporters. “For us to get a number supercell thunderstorms all with large to giant hail, significant wind gusts, and the damage from that, across that wide area is exceptional.”

As of now, no casualty has been reported. Queensland Fire And Emergency Service reported that more than 1,300 people had called for help and the powerlines had been disrupted in certain areas leading to a temporary suspension of passenger trains in the Nerang and Kuraby on the Gold Coast area.