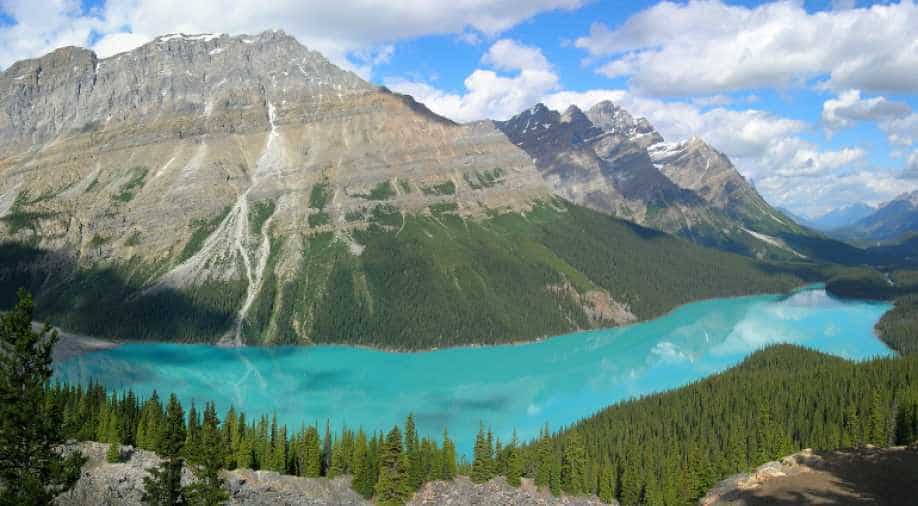 "We have a responsibility to do both, to preserve nature and provide opportunities for people to visit," said Danchuk. Peyto Lake, Banff. Image source Wikipedia via Tobi 87. Photograph:( Others )

On a highway in Banff National Park in western Canada, tourists hastily park their cars to catch a glimpse of a bear at the edge of the forest.

"We've seen some amazing animal life up here, much more than a lot of other places that we've gone camping," Tony Garland, a 60-something American who drove up from Seattle, told AFP.

Garland is part of a wave of American and Asian tourists flowing into Canada's national parks, known for their awe-inspiring beauty, in part thanks to a favorable exchange rate.

Record attendance is expected this year -- admission is free for both locals and foreign tourists as part of celebrations marking the country's founding 150 years ago.

But while the expected influx will be a boon to the tourism industry, the increased traffic also means more reckless behavior by visitors -- approaching or feeding wild animals, stomping on flora, and littering along park roadways.

That behavior has raised concerns about how best to ensure the natural wonders of the country's more than 40 treasured national parks are protected.

"Since January, we've doubled the number of reservations for campsites from what it was at the same time last year," said Parks Canada's Banff tourism manager Greg Danchuk.

"We have a responsibility to do both, to preserve nature and provide opportunities for people to visit," said Danchuk.

Canada's national parks contribute Can$1.5 billion (US$1.1 billion) annually to the economy, and employ 22,700 people, according to government figures. In its March budget, the federal government increased funding for Parks Canada by more than Can$300 million over the next two years.

But critics say that money is not going towards conservation efforts, and accuse the government agency of putting commercial interests first in recent years.

"By law, Parks Canada... actually have to put nature first and they haven't been," said Anne-Marie Syslak, executive director of the Alberta chapter of the Canadian Parks and Wilderness Society (CPAWS). "Too many people too fast without conservation as the priority -- it's a real risk for these parks."

Garland acknowledged that he'd seen some dodgy behavior during his visit to Banff, located in the Rocky Mountains and the most popular of Canada's parks, with four millions visitors last year.

"Some of the people don't seem to be that educated (about wildlife)," he said. "They get out of their cars and go near the bears, which is kind of crazy."

Edward Johnson, an ecology professor at the University of Calgary in Alberta, said many communities on the edges of the towering Rocky Mountains, once full of miners and oil workers, have repurposed themselves as tourist havens.

In Johnson's view, tourism and conservation are not mutually exclusive -- monies spent locally by tourists can be used to support conservation efforts, for example.

"The more people who want to come out and see natural areas, the more likely you're able to preserve more natural areas," he explained, while adding: "It's a double-edged sword."

Johnson said studies on the impact of development over the long term are insufficient. "You have to think carefully about your development and make everyone aware of what the consequences are, one way or the other," he said.

Also, Parks Canada is still spending more on tourism promotion than on conservation. "Tourism and conservation should lie hand in hand," echoed Syslak, "because people are coming to these areas for their natural beauty and wildlife."

"We also have a responsibility to be stewards of these lands so that we have these animals and we keep these places in a good state for the future," she said.