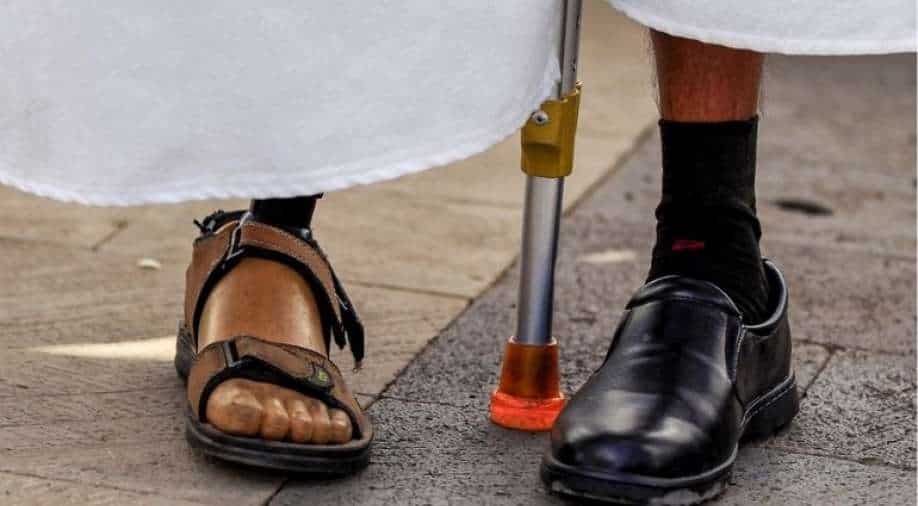 Representative | A groom with a prosthetic leg and crutches attends with others a mass wedding for thousands of couples including the poor, handicapped, and wounded, in Yemen's capital Sanaa on December 9, 2020. Photograph:( AFP )

In a disturbing revelation, an Australian court on Wednesday was presented with evidence of soldiers drinking from the prosthetic leg of a slain Afghan.

The artificial leg was allegedly taken from an Afghan killed by the military, photos of which were taken at an unauthorised bar at a military base in Afghanistan.

The court also referred to “hundreds” of pictures depicting soldiers drinking from the prosthetic at the bar called “Fat Ladies’ Arms”.

Out of these photographs, many had been amplified and published previously, The Guardian reported. But the full extent of such photographic evidence was revealed to a federal court in Australia on Wednesday.

Many publications are currently preparing to fight a defamation suit by the defendent in the case, Ben Roberts-Smith, who is the recipient of the highly coveted Victoria Cross. These publications include The Canberra Times, The Sydney Morning Herald and Rhe Age.

Matthew Richardson, a lawyer for Roberts-Smith, told the court that they had received new documents showing hundreds of soldiers drinking from the prosthetic leg at the bar, calling the process “onerous”. Richardson also alleged that these photos were leaked to the newspapers by Roberts-Smith’s former wife.

Lawyers representing the newspapers rejected the claim, saying that the USBs containing material including soldiers drinking from prosthetic leg were not sent by Emma Roberts, the former wife of Roberts-Smith.

Also read: Afghan boy, who lost a leg to landmine blast, dances with joy after getting a prosthetic leg

The newspapers allege that in 2009, Roberts-Smith had shot the Afghan to whom the prosthetic leg belonged, which was then “souvenired” from the deceased man and transported to the Australian base.

Lawyers for Roberts-Smith previously told the court that he in fact shot a man with a prosthetic leg, reportedly a Taliban soldier, but claimed that the “souvenir” was carried to the base by another soldier.

The defamation case against Australian newspapers was filed in response to a series of reports published in 2018 wherein he was accused of war crimes, which his lawyers deny as “baseless” and “false”. The trial will begin in Sydney on June 7.