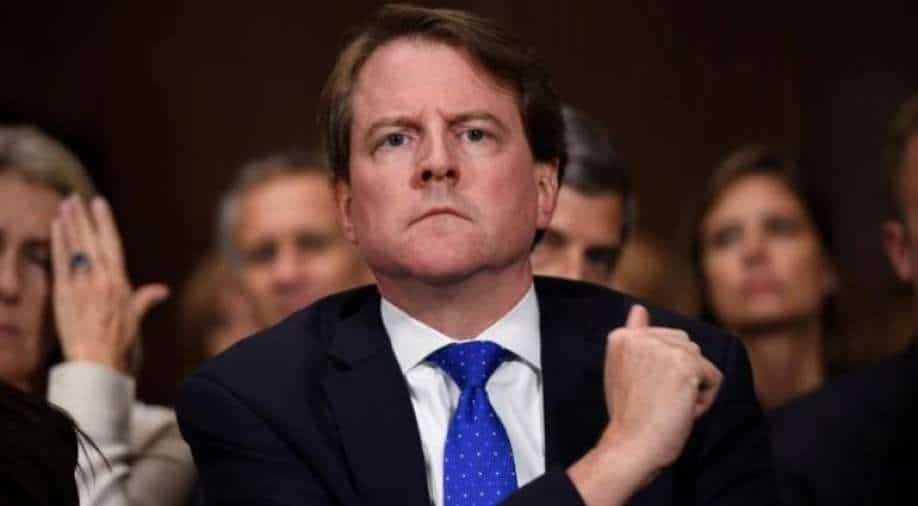 The Biden administration and House Democrats have reached a tentative deal to allow President Donald Trump’s former White House counsel, Donald McGahn, to testify before Congress about Trump’s efforts to obstruct the Russia inquiry, according to a court filing late Tuesday.

An appeals court had been set to hear arguments on the case next week, but lawyers for the Justice Department, which has been defending McGahn since 2019 against a House subpoena seeking to compel his testimony, and for the House of Representatives asked the court in a joint letter to drop that plan as mooted by the deal.

“The Committee on the Judiciary and the executive branch have reached an agreement in principle on an accommodation and anticipate filing, as soon as possible, a joint motion asking the court to remove this case from the May 19, 2021, oral argument calendar in order to allow the parties to implement the accommodation,” the letter said.

What to do about the subpoena case, which President Joe Biden inherited from the Trump administration, has been a rare locus of institutional disagreement among Democrats in the two branches.

Lawyers in the Biden White House have been hesitant about establishing a precedent that Republicans might someday use to force them to testify about their own internal matters. House Democrats under Speaker Nancy Pelosi have been determined to push forward after frustration that the Trump administration’s uncompromising approach and litigation strategy ran out the clock, preventing any testimony by McGahn before the 2020 presidential election.

The two sides had been negotiating for several months, leading to delays in the appeals court case. The filing was terse and offered no details about the deal, including what limits, if any, there would be — like whether McGahn would testify in public and the scope of what lawmakers could ask him to disclose.

That absence leaves open the question of whether Trump could try to intervene to block McGahn from testifying by asserting executive privilege. An attempt to invoke it by Trump would raise novel questions about the extent to which a former president may assert the privilege when the incumbent president declines to do so.

Should Trump try to intervene, a rare but limited precedent is a 1977 case, Nixon v. Administrator of General Services, in which the Supreme Court ruled that Richard Nixon could assert executive privilege claims over official records from his White House even though he was no longer the president — but it also weighed that assertion against the contrary view of Jimmy Carter, the president at the time.

That dispute, however, centered on control of Nixon-era White House documents, not a subpoena for a former White House lawyer’s testimony.

The present dispute centers on the House Judiciary Committee’s desire to question McGahn about matters related to his role as a key witness in the report by the special counsel, Robert Mueller, about efforts by Trump to obstruct the Russia investigation.

After the Justice Department made most of the report public, Democrats on the Judiciary Committee subpoenaed McGahn to testify. After he refused to appear, on Trump’s instructions, the committee sued.

The case has gone through several rounds of convoluted legal fights over constitutional issues that have lacked definitive precedents because previous disputes have generally been resolved with a negotiated compromise, averting a need for a court ruling.

But the lawsuit over the McGahn subpoena is one of an unprecedented number of cases pitting the two branches against each other in court that arose after Democrats took the House in the 2018 midterm elections and Trump vowed to stonewall “all” subpoenas.

First, the Justice Department under Trump had argued that McGahn was “absolutely immune” from any compelled appearance before Congress to testify about his work duties. Last year, the full District of Columbia Circuit rejected that theory.

The Justice Department then continued to fight the subpoena on other legal grounds, arguing that Congress had no “cause of action” that authorized it to sue the executive branch. (The executive branch has taken that position under administrations of both parties, and the Biden administration had signaled that it was prepared to keep arguing it.)

The apparent resolution of the McGahn subpoena case — unless Trump disrupts it — is similar to a dispute in 2009, when President Barack Obama took office and inherited a House lawsuit over a subpoena for testimony by President George W. Bush’s former White House counsel Harriet Miers related to the firings of U.S. attorneys.

The Obama administration, a lawyer for the House and a legal representative of Bush worked out a deal under which Democrats were able to confidentially interview Miers about the topic, with limits. That accommodation mooted the case, so the District of Columbia Circuit never issued a binding ruling, leaving the legal questions it rose unresolved.