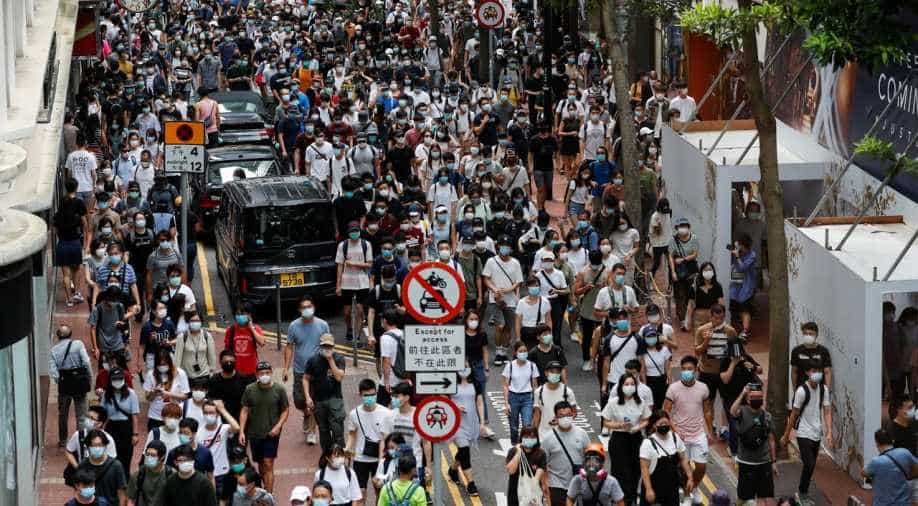 Demonstrations have been far fewer and smaller than the mass protests that rocked the Chinese-ruled city in the second half of 2019, largely because of coronavirus-related restrictions on gatherings and the impact of the sweeping new law, analysts say.

A growing majority of people in Hong Kong support the pro-democracy movement`s goals after China introduced a national security law for the city, but backing for the protest movement was a smaller 44%, a survey conducted for Reuters showed.

Demonstrations have been far fewer and smaller than the mass protests that rocked the Chinese-ruled city in the second half of 2019, largely because of coronavirus-related restrictions on gatherings and the impact of the sweeping new law, analysts say.

The survey taken by the Hong Kong Public Opinion Research Institute (HKPORI) was the first since the law was passed in the Asian financial centre on June 30.

It found nearly 60% of people were opposed to the security law, up from about 57% in HKPORI`s previous survey in June, when few of the details were known.

Hong Kong Chief Executive Carrie Lam`s office and China’s Hong Kong and Macau Affairs Office, which comes under the State Council, or cabinet, did not respond to requests for comment about the results of the survey.

“Now there are more concerns when you ask people to come out" to protest, he said, adding that police arrests have triggered "more anger in society."

Police said they had arrested 25 people, as of August 20, including protesters, activists and a media tycoon under the new law, which makes crimes of secession, subversion, terrorism and collusion with foreign forces punishable with up to life in prison.

The Hong Kong Police Force did not respond to a request to comment on the impact of the arrests on public opinion.

The government has said the law was needed to plug holes in national security exposed by the protests and to restore stability in Hong Kong. The survey found public support for the law was slightly over 31%.

Critics say the legislation further eroded the wide-ranging freedoms promised to the former British colony on its return to Chinese rule in 1997 under a one country, two systems agreement.

The latest survey asked: How much do you support or oppose the pro-democracy protest movement? The responses showed support at about 44%.

The question replaced one in the June survey that asked: Generally speaking, how much do you support or oppose the protest movement surrounding the extradition bill? The responses showed support at about 51%.

Drawing firm conclusions from the near seven percentage point drop was difficult due to uncertainty over the impact of the changed wording, Robert Chung, head of HKPORI said.

The changes were made because the extradition bill has faded as an issue as it has been withdrawn.

For the poll, 1,007 respondents were randomly surveyed by telephone. The results, which had a margin of error of plus or minus 3.2 percentage points as in previous polls, were weighted according to the latest population figures.

While protests have been smaller and less frequent, the poll showed backing for the pro-democracy movement`s key aspirations has risen.

Support for the request for an independent commission of inquiry to look into how police handled the demonstrations saw a rise of roughly 4 percentage points to 70%.

The police did not respond to a request to comment on the level of public support for an independent inquiry.

Police and the government have repeatedly said they used minimum force, that their sole goal was to restore law and order, and that there were adequate existing mechanisms to prevent and punish any indiscipline.

Support for universal suffrage, another key demand, remains strong with the backing of 63% of Hong Kong citizens, about the same as in the June poll.

Support for amnesty for the arrested protesters rose to almost 50%, up five percentage points since June.

Lam remains unpopular with 58% of respondents saying she should resign, little changed from the June poll.

Nevertheless, that`s an improvement over perceptions in March, when 63% of respondents said she should resign.

Opposition to the pro-democracy movement`s demands inched down to 19% from 21.5%.

The survey also showed that support for the idea of Hong Kong independence, which is anathema to Beijing and a focal point of the new legislation, remained at about 20% while opposition to independence hovered slightly below 60%.

HKPORI has conducted four polls for Reuters on how residents of the city regarded the protest movement. The previous surveys were conducted in December, March, and June.

Last month, police searched its offices, citing "a report from the public that the computer system of a polling organisation was suspected of being hacked and some personal information of the public was leaked."

At the time, HKPORI was helping organise an unofficial primaries vote for the pro-democracy camp to choose candidates for the legislative election, an operation the government and Beijing said may have violated the new security law.

The pollster had said it would cooperate with the police investigation, which it had hoped would be "impartial".

The latest survey showed just over half of the respondents were unhappy with the Hong Kong government`s move to postpone the legislative election by a year. It had been scheduled for September.

The government said the postponement was ordered due to worries about rising numbers of coronavirus cases, and denied there was any political motive.

The survey shows opposition candidates could have done well.

"The poll results show the more suppression from the government, the higher the opposition," said Ming Sing, associate professor of social sciences at Hong Kong University of Science and Technology.

Authorities in Hong Kong and Beijing have repeatedly rejected the notion that they were suppressing Hong Kong citizens.