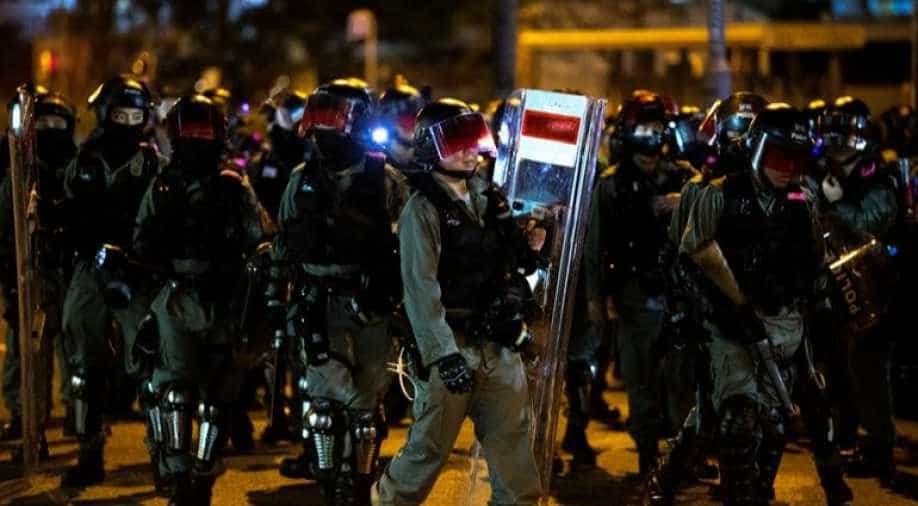 Hong Kong protesters prepared for demonstrations around the city on Thursday as shopping malls would close early to avoid becoming targets.

Hong Kong protesters prepared for demonstrations around the city on Thursday as shopping malls said they would close early to avoid becoming targets and the city's metro, which has borne the brunt of the violent unrest, will close three hours early.

Hong Kong is one of the world's top shopping cities but four months of often violent protests have severely dented that reputation, with scores of shops vandalised and malls now becoming sites for sit-ins by protesters.

The Asian financial hub is facing its first recession in a decade due to the unrest, with the tourism and retail sectors hit particularly hard.

Protesters have been playing cat and mouse with police, organising demonstrations at different locations via social media, stretching security resources.

Apple Inc on Wednesday removed an app that protesters have used to track police movements, prompting some demonstrators to say they may "visit" its Hong Kong store.

The unrest started more than four months ago in opposition to a now-withdrawn extradition bill but has widened into a pro-democracy movement amid fears China is encroaching on Hong Kong's freedoms.

Those freedoms were guaranteed under a "one country, two systems" formula when Britain returned Hong Kong to China in 1997, which allows autonomy not enjoyed on the mainland.

However, the unrest has pushed the special administrative region into its worst political crisis since 1997 and poses the biggest popular challenge to Chinese President Xi Jinping since he came to power in 2012.

Many young demonstrators are also incensed at what they see as widening inequality, sky-high property prices that make it impossible for them to get a place of their own and poor job prospects.

Demonstrations planned for Thursday include some in support of Taiwan on its National Day and rallies against perceived police brutality, with protesters expected to wear eye patches to show solidarity with a young protester who was injured in clashes with police.

Taiwan President Tsai Ing-wen, in a National Day speech in Taipei, rejected the "one country, two systems" formula that Beijing has suggested could be used to unify Taiwan and the mainland, saying the arrangement had set Hong Kong "on the edge of disorder".

Beijing regards Taiwan as a wayward province and has not renounced the use of force to bring it into the fold. Beijing has held out the Hong Kong arrangement of special autonomy within a united China as a model.

But Hong Kong's protests have been fuelled by resentment of what many residents see as relentless efforts by Beijing to exert control over their city, despite the promises of autonomy.

Hong Kong is still recovering from a long weekend of violent clashes between police and tens of thousands of protesters.

Scores of shops remain boarded up after being trashed or torched, anti-government graffiti is scrawled over bus stops and buildings, and some streets are still strewn with broken glass and twisted metal debris.

Protest violence has often targeted the MTR mass transit system, torching stations, and damaging ticketing machines. The MTR has been accused of closing stations at the government's behest to stop demonstrators gathering.

A slew of events and conferences have moved to other locations, including Singapore.

China has canceled broadcasting NBA basketball games after an executive of the US National Basketball Association (NBA) team the Houston Rockets back protesters in a tweet. Chinese sponsors and partners have cut ties with the NBA.

The NBA's business in China is worth more than $4 billion, according to Forbes.

China has warned foreign governments to stay out of the protests which they deem as an internal affair and have accused some, including Britain and the United States, of fanning anti-China sentiment.