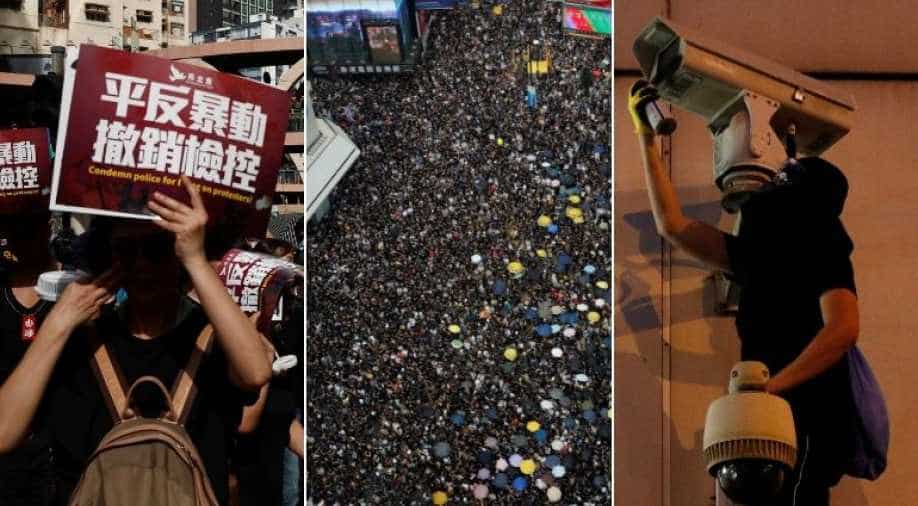 Hong Kong has been shaken by massive, sometimes violent, protests initially organised to oppose a now-suspended bill that would have allowed extraditions to mainland China.

China reacted furiously on Monday to anti-government protesters vandalising the walls of the Beijing representative's office in Hong Kong and defacing the national emblem.

Thousands of masked pro-democracy demonstrators briefly occupied the road outside China's Liaison Office in the semi-autonomous city Sunday night and targeted the building with eggs, projectiles, laser lights and graffiti in a stark rebuke to Beijing's rule.

China's foreign ministry spokesman Geng Shuang reacting to the protest said the behaviour of some "radical" Hong Kong protesters violates the bottom line of the "One Country, Two Systems" formula through which Beijing administers the territory, news agency Reuters reported.

Hong Kong has been shaken by massive, sometimes violent, protests initially organised to oppose a now-suspended bill that would have allowed extraditions to mainland China.

It has now morphed into a wider and sometimes violent movement for democratic reforms.

Protesters have vowed to sustain their movement until their core demands,  including universal suffrage and the resignation of the city's pro-Beijing chief executive Carrie Lam, are met.

So far, Beijing has refused to budge. Officials and state media have accused the protesters of playing into the hands of foreign powers who seek to harm China and backed the Hong Kong government.

Beyond agreeing to suspend the extradition bill, there have been few other concessions and fears are rising that Beijing's patience is running out.

Meanwhile, strongly condemning the anti-government protests, Lam said the targeting of the office was a "challenge" to national sovereignty.

She also described as "shocking" an apparent attack by organised triad criminal gangs on ordinary citizens and protesters at a train station on Sunday, saying authorities would investigate fully.