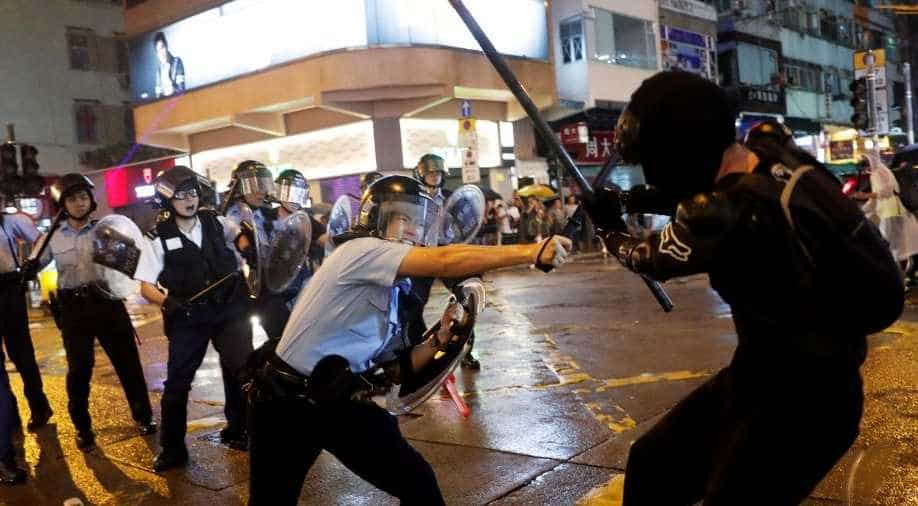 In one instance, several police officers drew their sidearms, an AFP reporter at the scene said.

Hong Kong police used water cannon for the first time and at least one officer fired his sidearm during pitched battles with protesters Sunday, one of the most violent nights in three months of pro-democracy rallies that have rocked the city.

An afternoon rally in the district of Tsuen Wan spiralled into violent running confrontations between protesters and police, with officers several times caught outnumbered and isolated by masked youths wielding sticks and throwing rocks.

In one instance, several police officers drew their sidearms, an AFP reporter at the scene said.

"According to my understanding, just now a gunshot was fired by a colleague," Superintendent Leung Kwok Win told the press.

"My initial understanding was that it was a uniformed policeman who fired his gun."

It was unclear where the shot was aimed, but it was the first live round fired since the protests started three months ago.

The financial hub has been gripped by mass rallies that were initially against a proposed extradition bill to China, but have spun into a wider pro-democracy movement targeting the pro-Beijing government.

Earlier Sunday, after thousands of people, marched peacefully in the pouring rain, a group of hardcore protesters erected makeshift roadblocks and threw bricks and Molotov cocktails at riot police.

After firing tear gas in an attempt to disperse the crowds, police drove water cannon vehicles onto the streets for the first time during the protests, unfurling signs warning demonstrators they would deploy the jets if they did not leave.

The jets were later fired down from the moving trucks down a road towards a crowd of protesters who ran away.

Police had previously said the vehicles, complete with surveillance cameras and multiple spray nozzles, would only be used in the event of a "large-scale public disturbance".

Throughout the protests, Beijing has used a mix of intimidation, propaganda and economic muscle to constrict the protests in a strategy dubbed "white terror" by the movement.

The MTR -- the city's metro -- is the latest Hong Kong enterprise to face public censure, after appearing to bend to Chinese state-media attacks accusing the transport system of being an "exclusive" service to ferry protesters to rallies.

On Sunday the MTR shut stations near the main demonstration area in Tsuen Wan, the second day of station closures in a row.

"However bleak our future is, we're trying to express ourselves rationally," said Peter, in his 20s, before the clashes began.

A second rally in the afternoon of a few hundred people -- some of them family members of police -- criticised the government for leaving officers to handle the brunt of the crisis, while also calling for an independent investigation into the police handling of the protests.

"I believe within these two months, police have got enough opprobrium," said a woman who asked not to be named and said she was a police officer's wife.

The city's officers are often the focus of protesters' anger because of their perceived heavy handling of the rallies.

Ten people were left in hospital after Saturday's clashes -- two in a serious condition -- staff said, without detailing if they were police or protesters.

Protesters say Hong Kong's unique freedoms are in jeopardy as Beijing tightens its political chokehold on the semi-autonomous city.

The city had appeared to have pulled back from a sharp nosedive into violence, with the last serious confrontation taking place more than a week ago, shortly after protests paralysed the airport. 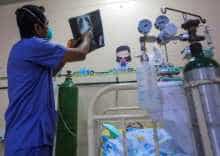