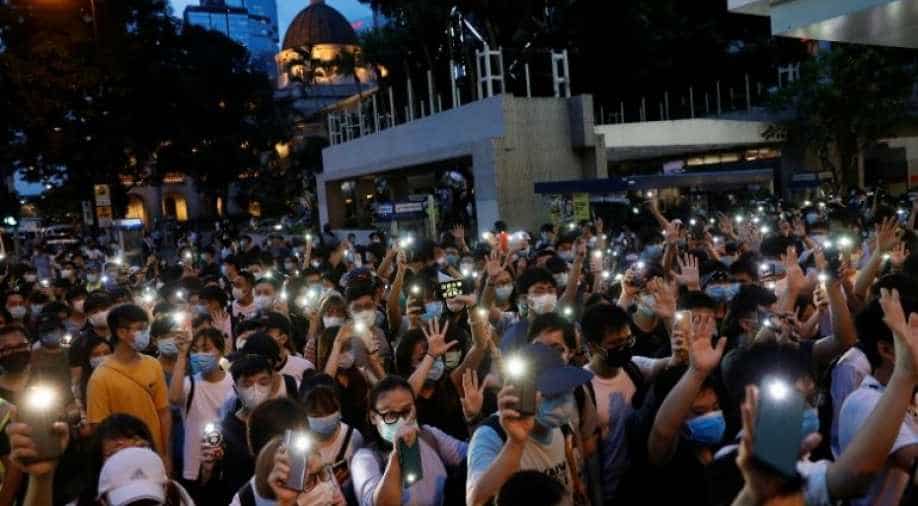 Pro-democracy demonstrators march holding their phones with flashlights on during a protest in Hong Kong, China (file photo). Photograph:( Reuters )

Out of the 53 arrests, 36 were men and 17 were women, who were arrested for unlawful assembly and their participation in the protests

On the first anniversary of pro-democracy protests in Hong Kong, the police arrested 53 people after a fresh wave of protests against China.

Activists in the city took to the streets again, and blocked roads in the centre of the city to cut off contact. Reuters reported that the police retaliated by firing pepper spray.

The protests which began last year after China’s plans to introduce a now panned extradition bill, became violent as there were excesses from both sides. The bill would have allowed prisoners to be transferred to mainland China indefinitely, where no freedom or democracy is available.

In pics: Hong Kong marks one year of pro-democracy protests with hope and fear

Beijing is now moving forward with the national security bill which calls to put an end to “troublemakers” in the city. Its provisions include terrorism, sedition, and foreign interference. The bill, once enforced, will essentially ban criticism of the Chinese government in the semi-autonomous city.

Out of the 53 arrests, 36 were men and 17 were women, who were arrested for unlawful assembly and their participation in the protests.

China had capitalised on the curfew rules in place in view of the COVID-19 crisis, but people defied the ban on assembly of more than eight people to continue protesting. 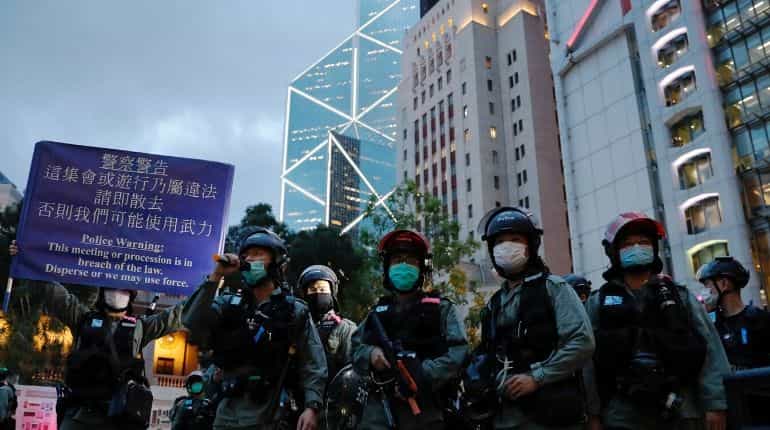 Riot police stand guard outside HSBC and Bank of China (Hong Kong ) headquarters during a protest to mark the first anniversary of a mass rally against a now-withdrawn extradition bill, in Hong Kong, China June 9, 2020. | Reuters

Reuters reported that more protests are planned in the city in the coming days. Many analysts, both from the city and outside assert the need to counter China and the new law, for they feel it will compromise the democratic freedoms guaranteed to the city as part of “Two systems, one country” agreement as part of which Hong Kong was returned to China by Britain.

Even though both Hong Kong leadership and Chinese claim that no freedoms will be compromised, and that the law will only target a few “troublemakers”, common people fear for their rights.

According to a South China Morning Post report, the police in Hong Kong is planning to set up a special unit to enforce the law and to focus its work on gathering intelligence and investigation these “troublemakers”.

The pro-China Carrie Lam recently said that Hong Kong can no longer afford any “chaos”.

Over the last year, over 9,000 people were arrested for participating in the protests.

The US has withdrawn the special status of Hong Kong, which could have trading impact in the city. Britain plans to offer citizenship to Hong Kongers if things go too far in the city!