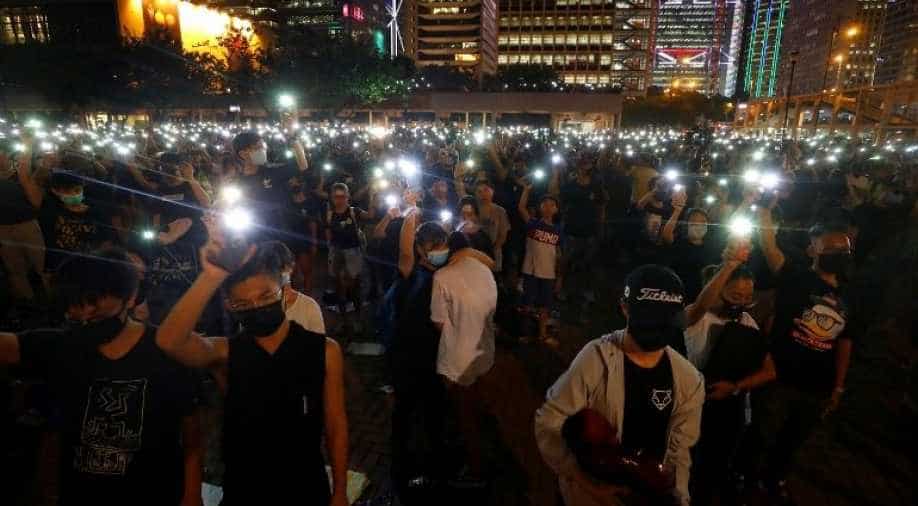 A student attends a rally to call for political reforms outside City Hall in Hong Kong, China, August 22, 2019. Photograph:( Reuters )

The Canadian Consulate in Hong Kong said on Friday it has suspended travel to mainland China for local staff, just days after an employee of the city's British Consulate was confirmed to have been detained in China.

Hong Kong is bracing for more anti-government demonstrations and a "stress test" of its international airport this weekend, as protests in the Asian financial hub show no signs of abating and diplomatic tensions between China and some Western nations rise.

The Canadian Consulate in Hong Kong said on Friday it has suspended travel to mainland China for local staff, just days after an employee of the city's British Consulate was confirmed to have been detained in China.

China's foreign ministry confirmed on Wednesday that Simon Cheng, an employee of the British mission, had been detained in the border city of Shenzhen neighbouring Hong Kong.

Beijing has accused Britain and other Western countries of meddling in its affairs in Hong Kong.

Canada's latest travel advisory on Thursday warned that increased screening of travellers' digital devices had been reported at border crossings between mainland China and Hong Kong.

Multiple protests are planned for Hong Kong on Friday, including a march by accountants to government headquarters and a "Baltic Chain" event where protesters will join hands across different districts in the Chinese territory.

In 1989, an estimated two million people joined arms across three Baltic states in a protest against Soviet rule that became known as the Baltic Way or Baltic Chain.

"The Baltic Way brought the world’s attention to their cause and inspired following generations," the rally organisers said in a statement. "We plead that you will not look away at this crucial time. Stand with Hong Kong."

The protests, originally over a now-suspended extradition bill to mainland China, have plunged Hong Kong into its deepest crisis since its British handover to Beijing in 1997 and pose a major challenge to Chinese President Xi Jinping.

Alphabet Inc's Google announced on Thursday its YouTube streaming video service had disabled 210 channels appearing to engage in a coordinated influence operation around the Hong Kong protests. Twitter and Facebook have also dismantled a similar campaign originating in mainland China.

The unrest has widened into calls for greater freedom, fuelled by worries about the erosion of rights guaranteed under the "one country, two systems" formula, adopted after the 1997 handover, such as an independent judiciary and the right to protest.

Activists plan to disrupt transport to Hong Kong's international airport at the weekend.

Hong Kong's airport, one of the world's busiest, was forced to close temporarily last week and hundreds of flights were cancelled or rescheduled when protesters and police clashed.

The Airport Authority published a half-page advertisement in major newspapers on Friday urging young people to "love Hong Kong" and said it opposed acts that "blocked and interfered with the operation of the airport". It said it would continue to work to maintain smooth operations.

The order requires public demonstrations have the permission of authorities and is aimed at banning "those who want to deliberately obstruct or interfere with the normal use of the airport", said the court.

Nearly three months of anti-government rallies have plunged the city into crisis, drawing in corporate casualties such as Cathay Pacific amid mounting Chinese scrutiny over the involvement of some of the carrier's staff in protests.

Cathay confirmed on Friday that Rebecca Sy, the head of Cathay Dragon's Airlines Flight Attendants' Association, was no longer with the company. Her departure follows the shock resignation of Cathay CEO Rupert Hogg last week.

The Hong Kong Confederation of Trade Unions said it will hold a news conference later on Friday to provide details of Sy's departure.

The protests are already taking a toll on the city's economy and tourism, with the special administrative region on the cusp of its first recession in a decade.

Corporations, including big banks and property developers, have called for a restoration of law and order, while exhibitors are seeing widespread cancellations of events.

In the most recent case, international jewellers have sought the rescheduling of a huge trade fair with up to 40% of exhibitors threatening to pull out.

Demonstrators have five demands: withdraw the extradition bill, establish an independent inquiry into the protests and perceived police brutality, stop describing the protests as "rioting", waive charges against those arrested, and resume political reform.