Haiti’s leader kept a list of drug traffickers. His assassins came for it 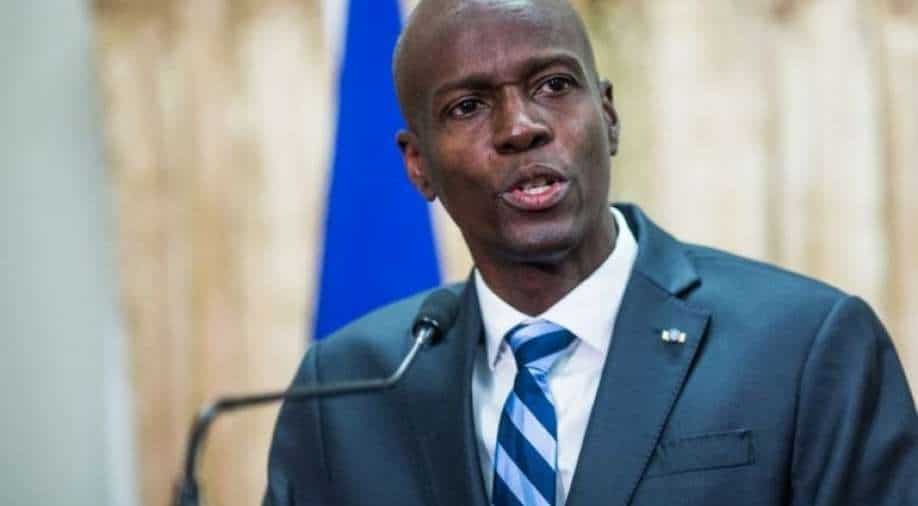 In this file photo former Haitian President Jovenel Moise speaks at the swearing in ceremony for Prime Minister Jack Guy Lafontant at the National Palace in Port-au-Prince Photograph:( AFP )

The president had ordered the officials to spare no one, not even the power brokers who had helped propel him into office.

President Jovenel Moïse of Haiti was about to name names.

Before being assassinated in July, he had been working on a list of powerful politicians and businesspeople involved in Haiti’s drug trade, with the intention of handing over the dossier to the US government, according to four senior Haitian advisers and officials tasked with drafting the document.

The president had ordered the officials to spare no one, not even the power brokers who had helped propel him into office, they said — one of several moves against suspected drug traffickers that could explain a motive for the assassination.

When gunmen burst into Moïse’s residence and killed him in his bedroom, his wife, Martine Moïse — who had also been shot and lay bleeding on the floor, pretending to be dead — described how they stayed to search the room, hurriedly digging through his files.

“‘That’s it,’ ” they finally declared to one another before fleeing, she told The New York Times in her first interview after the assassination, adding that she did not know what the gunmen had taken.

Investigators arrived at the crime scene to find Jovenel Moïse’s home office ransacked, papers strewn everywhere. In interrogations, some of the captured hit men confessed that retrieving the list Moïse had been working on — with the names of suspected drug traffickers — was a top priority, according to three senior Haitian officials with knowledge of the investigation.

The document was part of a broader series of clashes Moïse had with powerful political and business figures, some suspected of narcotics and arms trafficking. Moïse had known several of them for years, and they felt betrayed by his turn against them, his aides say.

In the months before his death, Moïse took steps to clean up Haiti’s customs department, nationalize a seaport with a history of smuggling, destroy an airstrip used by drug traffickers and investigate the lucrative eel trade, which has recently been identified as a conduit for money laundering.

The Times interviewed more than 70 people and traveled to eight of Haiti’s 10 departments, or states, to interview politicians, Moïse’s childhood friends, police officers, fishermen and participants in the drug trade to understand what happened in the last seven months of the president’s life that may have contributed to his death. Many of them now fear for their lives as well.

“I would be a fool to think that narco-trafficking and arms trafficking didn’t play a role in the assassination,” said Daniel Foote, who served as the U.S. special envoy to Haiti before stepping down last month.

A central figure on Moïse’s list was Charles Saint-Rémy, known as Kiko, two of the Haitian officials tasked with helping draft the dossier said. Saint-Rémy, a Haitian businessman, has long been suspected by the U.S. Drug Enforcement Administration of involvement in the drug trade. Notably, he is also the brother-in-law of former President Michel Martelly, who lifted Moïse out of political obscurity and tapped him to be his successor.

Martelly, who is considering another run for the presidency, and Saint-Rémy were hugely influential in Moïse’s government, with a say in everything from who got public contracts to which Cabinet ministers got appointed, according to Haitian officials inside and outside his administration. But Moïse came to feel that they and other oligarchs were stifling his presidency, his aides say.

American officials say that they are looking closely at Moïse’s efforts to disrupt the drug trade and challenge powerful families as motives in the assassination, and they note that Saint-Rémy emerged as a possible suspect early in the investigation. But they caution that Moïse threatened many of the economic elite, including a number of people with deep criminal connections.

Martelly and Saint-Rémy did not respond to a detailed list of questions for this article.

The investigation into Moïse’s killing has stalled, American officials say, and if the assassination is not solved, many Haitians fear it will add to the mountain of impunity in the country, further emboldening the criminal networks that have captured the state.

‘The True Leader Wasn’t the President’

When Moïse was chosen by Martelly in 2014 to be his successor, Martelly introduced the nation to a supposed outsider with peasant origins, a man of the countryside who had lifted himself out of poverty by running banana plantations.

Martelly’s associates said he first met Moïse during a conference and was struck by the entrepreneur’s business acumen.

But the story was misleading: Moïse had mostly grown up in the capital, several of the original board members of his banana plantation say it was a failure, and Moïse was already a close associate of Saint-Rémy and at least one other suspected drug trafficker.

Moïse, 53 at the time of his assassination, was born in Trou-du-Nord, French for “hole of the North,” an agricultural town that has suffered under decades of government neglect.

When Moïse was 7, his mother moved him and his siblings to Carrefour, a slum of Port-au-Prince. In university, Moïse met his wife, and they moved together to her hometown, Port-de-Paix, in the northwest.

By 2000, Moïse had met and become business partners with Evinx Daniel, according to relatives and acquaintances of both men. Daniel, a close friend of Martelly’s, would later be accused of drug trafficking.

Moïse worked with Daniel on one of his ventures, Mariella Food Products, which produced biscuits. A former high-ranking Haitian police officer said the company was suspected of being a money laundering front.

Saint-Rémy has publicly admitted that he sold drugs in the past but claims all his businesses are now legitimate. Haitian law enforcement officials and former DEA officers who recently served in Haiti say he is still believed to be one of the country’s biggest drug traffickers.

Jacques Jean Kinan, Moïse’s cousin, said he and Moïse worked with Saint-Rémy in the eel industry.

With his brother-in-law as president, Saint-Rémy wielded enormous influence, often demanding that choice licenses and contracts be awarded to him, particularly eel export licenses, according to officials in Martelly’s government.

When his demands were not heeded, he could turn violent: In 2015, Saint-Rémy assaulted an agriculture minister for issuing a contract without his consent, an altercation reported at the time and confirmed by a former government minister.

As Saint-Rémy’s hold on the eel trade solidified, Moïse decided to get out of the sector and focus on Agritrans, a banana plantation near his hometown.

Barred by the constitution from running for two consecutive terms, Martelly began looking for a successor. He wanted to find someone to keep the bench warm for him until he could launch another presidential bid and shield himself from corruption allegations involving the misappropriation of billions of dollars during his tenure, according to former officials in the Martelly and Moïse administrations.

He settled on Moïse, marketing him as a successful entrepreneur and nicknaming him the “Banana Man” on the campaign trail.

In interviews, three of the original board members of Agritrans described the venture as a failure, with their original investments lost and little but a barren field to show for it.

But as Martelly contemplated a successor, the company received a $6 million loan from the government.

When he won and took over the presidency in 2017, Moïse felt suffocated by Martelly but remained loyal to him, his aides said.

“The true leader wasn’t the president,” said Gabriel Fortuné, a close adviser to Moïse who died in an earthquake a day after speaking with the Times. “It was his godfather, Martelly. When we talk about the godfather we are talking about the Italian way,” he added, “the family.”

‘They Will Kill Me’

As Moïse settled into office, he soon realized that the withering control Martelly and his family exerted on the campaign trail extended to his personal security, several officials said.

Hérard was also a drug-trafficking suspect. In 2015, when a Panamanian-flagged cargo ship docked in Port-au-Prince with 1,100 kilograms of cocaine and heroin aboard, Hérard was seen commanding police officers in uniform to load the drugs into vehicles before speeding off with them, according to a witness and Keith McNichols, a former DEA agent stationed in Haiti who led the agency’s investigation into the missing drug shipment.

Moïse deeply mistrusted Hérard, according to several presidential advisers and an international diplomat the president confided in.

Hérard, now in detention as a suspect in the assassination, could not be reached for comment.

In January, Hérard ordered about 260 weapons from Turkey — including M4 carbines and handguns — making out the order to the presidential palace, Fortuné and a former security official said. Hérard sold most of the weapons to gangs and businesses.

Moïse’s relationship with the presidential security forces, already on tenterhooks, further soured. But that changed in February, when Hérard claimed to have foiled a coup attempt against Moïse.

After the coup scare, Moïse went on the offensive, publicly blasting Haiti’s oligarchs and political elite for trying to kill him, including in one of his final interviews with the Times before his death.

Behind the scenes, Haitian officials say, Moïse began working to take down his perceived enemies.

In February, Josua Alusma, mayor of Port-du-Paix and a close Moïse ally, ordered a crackdown on the eel trade, the industry dominated by Saint-Rémy.

The same month, the president also started to discuss plans to nationalize a seaport owned by allies of Martelly, where several shipments of illegal weapons have been found and seized over the years, two senior Haitian officials said.

“Jovenel told me that he had an agenda that he wanted to implement but he couldn’t because, he said, ‘They will kill me,’ ” recounted a powerful politician who served as an informal aide to Moïse, speaking on condition of anonymity for fear of his life. The port, he said, “was part of the plan.”

Moïse also tried to push customs, despite considerable resistance, to start inspecting Saint-Rémy’s shipments and charging taxes on his goods, according to several presidential aides, two senior security officials and an official at the customs department.

Drug trafficking routes in Haiti’s north also came under pressure. In the 1990s, little Cessna planes from Colombia landed on dirt airstrips on the outskirts of Port-au-Prince. But as the population expanded, the landing strips became surrounded by slums. Poor residents realized the valuable illicit cargo the planes held and began raiding them, according to a security official.

So, about a decade ago, traffickers moved the airstrips north, to Savane Diane, a sprawling, isolated area. Since then, the drug trade has evolved and boomed.

Moïse’s aides said he became aware of the airstrip after a furious call from the DEA.

Between May and June, the airstrip in Savane Diane and another in Haiti’s north hosted an inordinate amount of traffic, with at least a dozen planes coming through, potentially carrying thousands of kilos of cocaine, Haitian security officials say.

When Moïse found out about the deliveries in mid-June, he was fuming, his aides said. Then came an order from the presidential palace: Destroy the airstrip.

But local authorities refused to do it, according to several officials interviewed.

About a week later, Moïse was at home with his wife and two children when hitmen burst into his home. They had been let into the presidential compound by Hérard’s forces.

Not a single shot was fired between the assassins and Moïse’s guards. As the gunmen stormed the residence, the president called Hérard and another security official to rescue him, his widow told the Times. No help came.