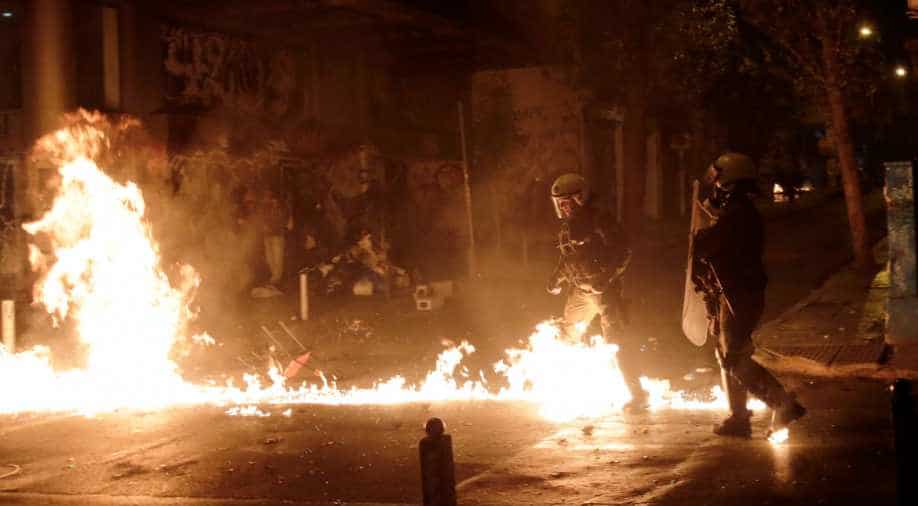 Obama's visit comes just two days before the anniversary of a bloody 1973 student revolt that helped topple the 1967-1974 military junta which was backed by the US government. Photograph:( Getty )

Demonstrations against US President Barack Obama's visit to Greece turned violent on Tuesday as protesters clashed with riot police in Athens.

Police fired teargas at protesters rallying a few kilometres from the presidential mansion where Obama was being hosted. The people tried to break the police barrier to reach the parliament and US embassy. Some demonstrators threw petrol bombs at the police.

About 7,000 people, among them anti-war, anti-racism, and leftist groups, communist party supporters, and labour union members were angry over the US' stance on the war in Syria, US-Turkey relations and the election of Donald Trump and his stance on immigrants. They marched through the streets of central Athens holding banners reading 'Trump build a wall around your face' and 'White supremacy is terrorism - no Trump', news agency Reuters reported.

On his last tour as the President of the United States, Obama offered solidarity with his Greek hosts by supporting debt relief for the recession-battered country.  "We cannot simply look to austerity as a strategy," Obama said after talks with Greek Prime Minister Alexis Tsipras.

But the protesters waved banners that read: "We don't need protectors!" and "Yankees go home!"

Obama's visit comes just two days before the anniversary of a bloody 1973 student revolt that helped topple the 1967-1974 military junta which was backed by the US government, Reuters reported.

Greece hopes Obama will be able to persuade its foreign creditors to restructure some of its debt, which stands at nearly 180 per cent of national output.