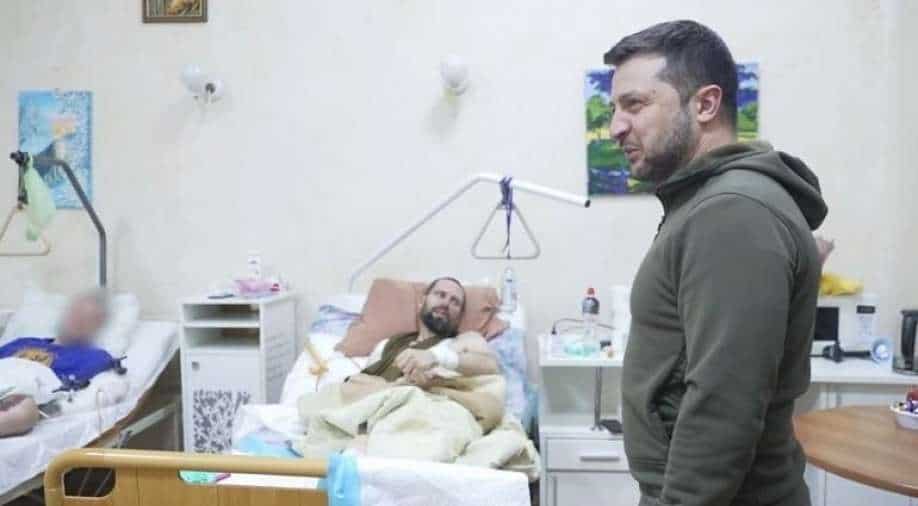 In this photo, Ukrainian President Volodymyr Zelensky can be seen during a visit to a local hospital and talking to the country's soldiers Photograph:( Twitter )

Zelensky accused Russia of trying to break his country apart, as well as starting 'a new stage of terror' with the alleged detention of a mayor from a city west of Mariupol

He told them, “Guys, get well soon. I believe that the best gift for your statement will be our common victory! ” as per an English translation of a tweet posted by the Ministry of Defence of Ukraine.

Some of the soldiers in the video were said to have been wounded in Hostomel and Irpin, the two cities where fierce fighting against Russian troops took place.

Zelensky accused Russia of trying to break his country apart, as well as starting “a new stage of terror” with the alleged detention of a mayor from a city west of Mariupol.

“Ukraine will stand this test. We need time and strength to break the war machine that has come to our land,” Zelensky said.

It comes after waves of Russian missiles pounded a military training base close to Ukraine’s western border with NATO member Poland, killing 35 people.

More than 30 Russian cruise missiles targeted the sprawling training facility that is less than 25 kilometers (15 miles) from the closest border point with Poland, according to the governor of Ukraine’s western Lviv region. Poland is a key location for routing Western military aid to Ukraine.

Since Russia invaded Ukraine, Lviv had largely been spared the scale of destruction unfolding further east.

The training centre in Yavoriv appears to be the most westward target struck so far in the 18-day invasion.

The facility, also known as the International Peacekeeping and Security Centre, has long been used to train Ukrainian military personnel, often with instructors from the United States and other NATO countries.

The United States on Saturday said it would rush up to $200 million worth of additional weapons to Ukrainian forces as they try to defend against Russian shelling in the largest war in Europe since World War Two.

The Russian assault, which Moscow calls a "special military operation," has trapped thousands of civilians in besieged cities and sent 2.5 million Ukrainians fleeing to neighboring countries.

The United States and its allies have imposed sweeping, unprecedented sanctions against Russia and banned its energy imports, while providing billions of dollars of military and humanitarian assistance to Ukraine.