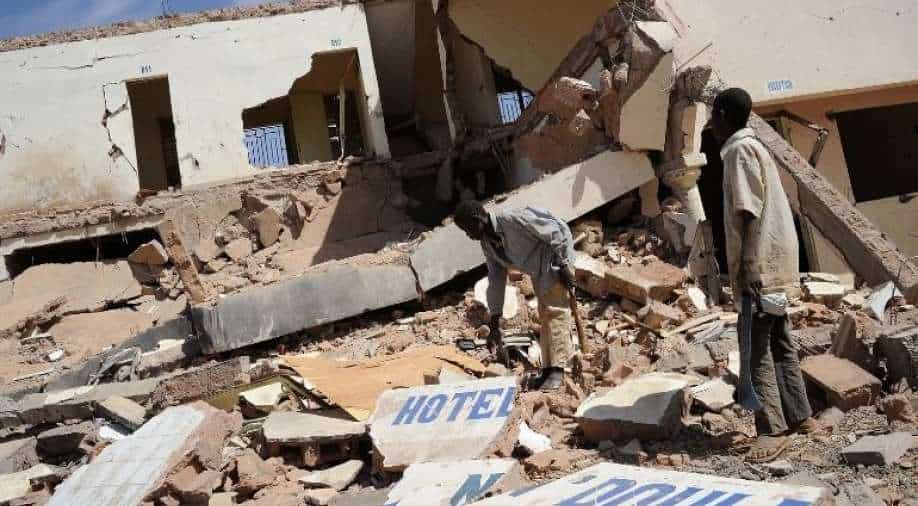 In this file photo children search on February 5, 2013 in the ruins of a hotel destroyed by French air strikes in Douentza, as he town was retaken by French and Malian troops in January Photograph:( AFP )

France has more than 5,000 troops in Mali and neighbouring countries to battle groups linked to al Qaeda and Islamic State

A French air strike in January killed 19 civilians and three armed men at a wedding in the remote desert of central Mali, United Nations investigators said on Tuesday, contradicting France's account that only Islamist militants were hit.

France immediately rejected the findings, which are likely to fuel domestic criticism of Mali's former colonial master. France has more than 5,000 troops in Mali and neighbouring countries to battle groups linked to al Qaeda and Islamic State.

The human rights division of the United Nations mission in Mali (MINUSMA) said it had visited the village of Bounti where the attack took place on Jan. 3, analysed satellite images and interviewed more than 400 people, including at least 115 in face-to-face, individual sessions.

"MINUSMA is able to confirm that a wedding celebration was held that brought together about 100 civilians at the site of the strike, among whom five armed individuals, presumed members of Katiba Serma, were present," the report said.

Katiba Serma is an armed group affiliated with al Qaeda.

The MINUSMA report said 19 people, including 16 civilians and three of the armed men, were killed immediately in the air attack, while three more civilians died while being transferred to medical care.

In a statement, France's armed forces ministry said the strike followed a "robust targeting process" that identified the targets as militants.

"The only concrete sources on which this report is based are local testimonies. They are never transcribed, the identity of the witnesses is never specified, nor the conditions in which the testimonies were gathered," it said.

"It is therefore impossible to distinguish credible sources from false testimonies by possible terrorist sympathisers or individuals under the influence (including threats) from jihadist groups."

The MINUSMA report said each witness account was verified with other evidence and that some witnesses were relocated to allow them to speak freely.

Its report said forensics experts found no evidence of incinerated motorcycles, weapons or ammunitions that would have suggested the presence of a large number of armed men.

"This strike raises important concerns about the respect of the rules of armed conflict," it said. "MINUSMA recommends that the Malian and French authorities lead an independent, credible and transparent investigation."

France has been embroiled in Mali's conflict since 2013, when it intervened to push back Islamist militants who were advancing south after seizing the desert north.

The conflict has since spread to neighbouring countries in the West African Sahel region like Burkina Faso and Niger, leading to rising criticism of French forces from local activists and some politicians.

The Jan. 3 air strike came after five French soldiers were killed the previous week in two attacks carried out with improvised explosive devices.