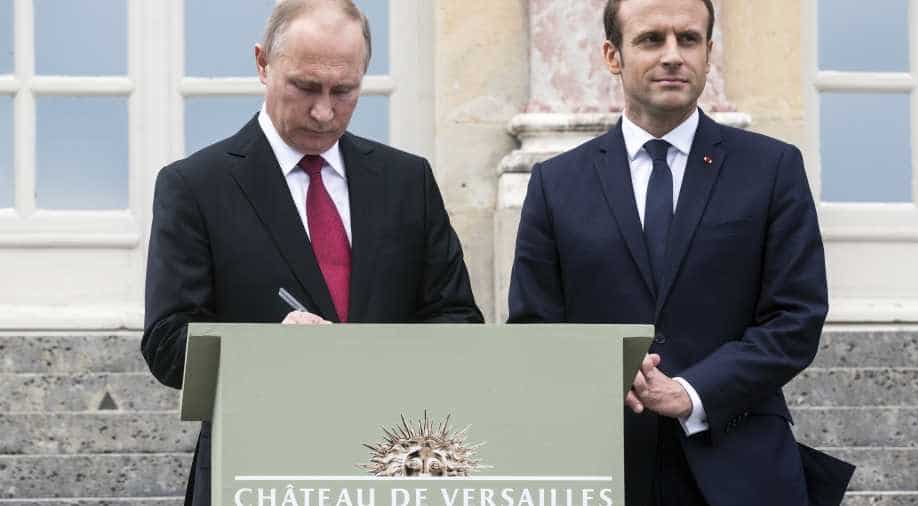 French President Emmanuel Macron (R) and Russian President Vladimir Putin sign the golden book after a visit of an exhibition about Russian emperor Peter the Great at the Grand Trianon following their meeting at the Versailles Palace. Photograph:( AFP )

France's President Emmanuel Macron and his Russian counterpart Vladimir Putin attempted to improve their countries' strained ties on Monday during talks at Versailles palace described by Macron as "extremely frank".

Their first meeting since Macron took office provided another test of the Frenchman's diplomatic skills after his memorable vice-grip handshake last week with US President Donald Trump.

This time the handshake was warmer but the tone guarded after an hour of talks on the 300th anniversary of a visit to Versailles by tsar Peter the Great.

Putin admitted to some differences of opinion in the talks which covered issues including the conflicts in Syria and Ukraine, but insisted that Franco-Russian ties withstood "all points of friction".

"We disagree on a number of things but at least we discussed them," Macron said.

"Our absolute priority is the fight against terrorism and the eradication of terrorist groups and Daesh in particular," he said, using an alternate name for the Islamic State group that has claimed several deadly attacks in France.

The newly elected French leader said he wanted to work more closely with Russia to try resolve the six-year war in Syria, one of the sticking points in relations between the West and Moscow which backs the regime of Bashar al-Assad.

Calling for "a democratic transition that preserves the Syrian state", he warned that "failed states" in the Middle East emboldened terror groups and posed a threat to the West.

But in an apparent warning to Assad and Russia, he said the use of chemical weapons was a "red line" that would draw an "immediate response" from France.

The pair also discussed the Western sanctions imposed on Russia over its encroachment on neighbouring Ukraine as well as allegations of Russian meddling in France's presidential campaign.

The Russian strongman defended hosting Macron's far-right rival Marine Le Pen -- seen as the Kremlin's favourite -- for a visit during the race, saying he had no cause to deny her request for an audience.

A more candid Macron let fly when questioned about two pro-Kremlin media outlets that were barred from his campaign headquarters after being accused of a smear campaign.

Russia Today broadcaster and Sputnik agency are "organs of influence and untruthful propaganda, nothing more, nothing less", he declared.

Macron also took the bull by the horns on human rights, saying Putin had promised him "the whole truth" about an alleged crackdown on gay men in Russian-controlled Chechnya and warning he would be "vigilant" on the issue.

France's youngest ever president made a successful debut on the world stage last week, holding his own against Trump at a NATO summit in Brussels and winning plaudits from his peers at a G7 summit in Italy.

Ahead of Putin's visit, the 39-year-old centrist told a French weekly that he was not "bothered" by leaders who "think in terms of power dynamics".

He said he would make "not a single concession" to Russia on the three-year-old conflict in eastern Ukraine, with he and his G7 counterparts saying they were prepared to strengthen sanctions against Moscow.

Macron said he, Putin and the leaders of Germany and Ukraine would meet soon for talks, "which will allow us to make a complete evaluation of the situation".

Western powers charge Russia with failing to honour its commitments under the Minsk accords framework for ending the violence between government forces and Kremlin-backed rebels in Ukraine's east.

Putin said the sanctions imposed on Russia, which have seriously hurt trade with the EU, had "in no way" advanced the prospects of a lasting peace.

Directly after the French election he moved quickly to try reset relations with France, congratulating Macron and urging him to work to overcome their countries' "mutual distrust".

Monday's visit comes seven months after the Russian leader cancelled a trip to Paris amid a row over Syria with Macron's predecessor Francois Hollande, who had said Russia's bombing of Aleppo could amount to war crimes.

In Versailles, he and Macron inaugurated an exhibition marking the visit of Russia's modernising tsar Peter the Great to Versailles in 1717.

The fervently pro-Europe Macron said his invitation to Putin aimed to showcase "a Russia which is open to Europe".