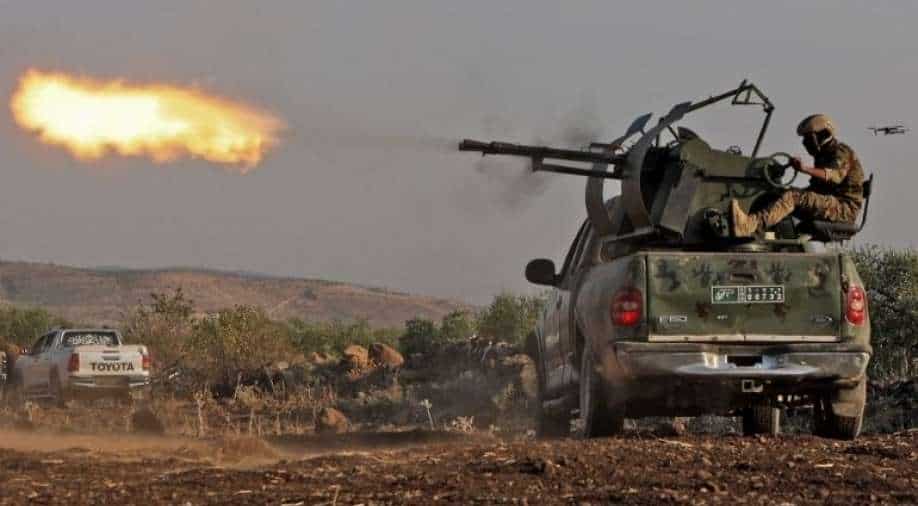 A Turkish-backed Syrian fighter fires a turret in the back of a technical vehicle during military drills in the district of Sheikh Hadid in the Afrin region of northwestern Syria, on August 5, 2021. (File Photo) Photograph:( AFP )

About three million people inhabit the Idlib region, which is controlled by Syria's former Al-Qaeda affiliate. However, there are also other rebel groups and jihadist organizations present

Foreign jihadists based in Syria's last major rebel bastion killed at least six regime fighters in an attack Friday in the northwest of the country, a war monitor said.

Four Uzbek fighters were also killed after they sneaked up on regime forces on the southern edge of the jihadist-dominated stronghold, the Britain-based Syrian Observatory for Human Rights said.

The Idlib region, which is home to nearly three million people, is dominated by Syria's former Al-Qaeda affiliate but other rebels and jihadist groups are also present.

An international ceasefire deal has since March 2020 stemmed a Russia-backed regime assault to retake the bastion, though some small jihadist groups have refused the agreement and continued to attack pro-Damascus fighters on its edges.

Friday's attack occurred on the outskirts of the town of Maaret al-Numan, retaken by regime forces in their latest military campaign early last year.

The war in Syria, which began in 2011 with a crackdown on pro-democracy protesters, has left more than half a million people dead and several million displaced.