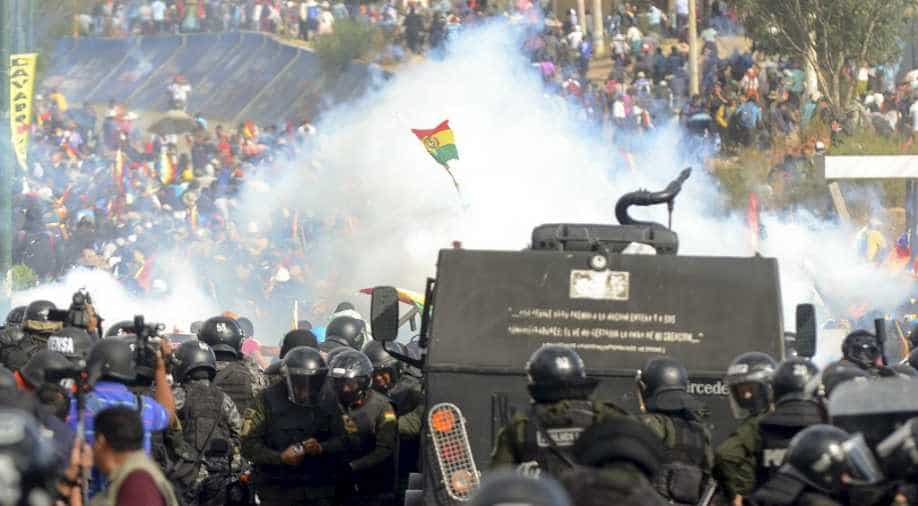 Former president Evo Morales said that he is willing to return in order to bring peace in the country.

Five people were killed in violent clashes between the protesters and security forces on Friday in Bolivia.

AFP reported that the five people were the supporters of former president Evo Morales who is on an exile in Mexico. The death toll was so far not declared by the authorities, although 100 people are detained in the riots outside Cochabamba.

Morales said that he is willing to return in order to bring peace in the country.

On Friday, clashes broke out between coca growers and security officials in Cochabamba after the former intended to reach city centre 18 kilometres away to join a protest against interim chief Jeanine Anez. The police did not allow the demonstrators to reach the protest site.

Cochabamba police commander Colonel Jamie Zurita said that the protesters carried "weapons, guns, Molotov cocktails, homemade bazookas and explosive devices". He also added that protesters were carrying dynamite and other "deadly weapons" which made the police took this action.

Riot police and the army ensured that the crowd was dispersed late in the evening.

"This is a real massacre, it is a genocide, I deplore all these deaths," Evo Morales told CNN.

Earlier on Friday, the interim leader announced that Morales will not contest in the new election as thousands of demonstrators marched through La Paz in support of the former president and socialist icon and against Anez. Anez said that Morales will not contest his fourth term. Bolivia's constitution limits a president for two successive terms. The protesters claimed that Morales' departure was not a resgination but a product of coup.

Bolivia is in the middle of unrest since October 20 when election results were announced and Morales was accused of rigging the elections in order to stay in power.

At least 15 people have already died and over 400 are injured in the protests. Schools and universities are closed due to the massive demonstrations.

Anez declared herself as the leader of the country on Tuesday after Morales fled to Mexico claiming the threat to his life. Bolivia's top court validated Anez's move.

The United States, Russia, Guatemala and Colombia recognize Anez as interim leader but Moscow claims that Morales was a victim of a coup.