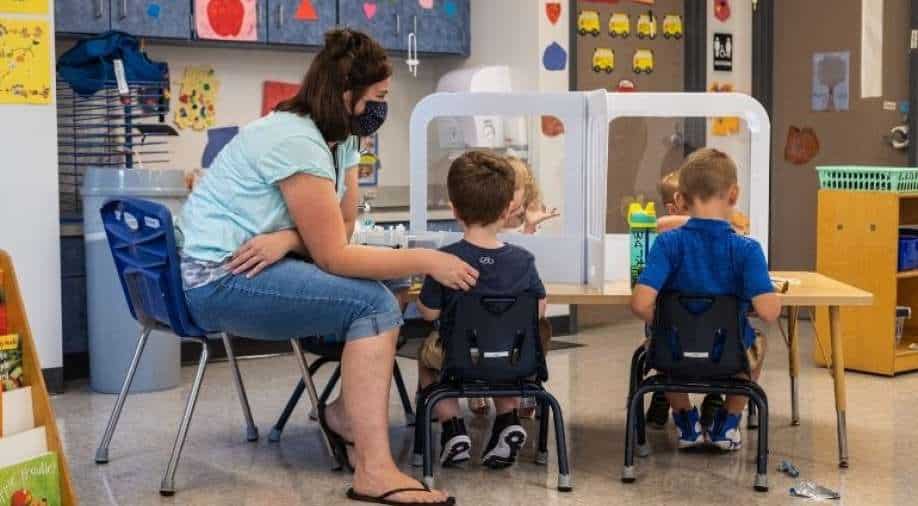 For instance, it could bar federal funds from going to programs that refused to hire a gay employee, gave preference to applicants of their faith or failed to renovate their facilities to accommodate students with disabilities

A coalition of conservative religious groups is waging an intensive lobbying effort to remove a nondiscrimination provision from President Joe Biden’s ambitious prekindergarten and child care plans, fearing it would disqualify their programs from receiving a huge new infusion of federal money.

The fight could have major consequences for a central component of Biden’s $1.85 trillion social policy bill, which the House is to consider as soon as this week. It could go a long way toward determining which programs, neighbourhoods and families can benefit from the landmark early-childhood benefits established in the legislation, given that child care centres and preschools affiliated with religious organisations make up a substantial share of those offered in the United States — serving as many as 53 per cent of families, according to a survey last year by the Bipartisan Policy Center.

The provision at issue is a standard one in many federal laws, which would mandate that all providers comply with federal nondiscrimination statutes. Religious organisations, whose child care programs are currently exempt from some such laws, argue that it would effectively block many of their providers from participating, while civil rights advocates contend it is long past time for such institutions to comply.

Some of the faith groups are pressing lawmakers to scrap or modify the nondiscrimination language, asserting that it would essentially shut them out of the new federal program unless they made major changes to the way they operate. For instance, it could bar federal funds from going to programs that refused to hire a gay employee, gave preference to applicants of their faith or failed to renovate their facilities to accommodate students with disabilities.

The organisations argue that the rules would force them to choose between participating in the child care initiative and continuing to teach religious content, convene all-boys or all-girls programs, or give preferences in hiring or admissions to people of their religion. Congressional staff members working on the bill do not believe it prohibits religious organisations from teaching religious content.

The groups — including the US leaders of the Catholic Church and one of the country’s largest Orthodox Jewish groups — contend that unless the bill is rewritten, they will be forced to turn away families that want to use benefits from the bill to send children to their centres.

“It will be detrimental to our ability to participate,” said Jennifer Daniels, the associate director for public policy at the United States Conference of Catholic Bishops. “It would impact our ability to stick with our Catholic mission in a variety of ways. We’ve worked really hard to make our concerns known.”

Their efforts appear to have gained some traction in the Senate, where Sen. Joe Manchin, D-W.Va., a key swing vote on the social policy bill, has privately told Democrats, he wants to ensure that religious programs can fully participate in the child care initiative.

But in the House, Democrats are just as adamant that the provision be retained in order to prevent federal money from flowing to any organisation that discriminates. Defenders include the Congressional Black Caucus and Rep. Robert C. Scott, D-Va. and the chair of the Education and Labor Committee, who wrote it into the social policy legislation.

The fight over preschool and child care programs is among the major conflicts that remain to be resolved before the social policy legislation can clear Congress and be signed into law by Biden.

“The Build Back Better Act must not allow government-funded discrimination — in employment or in the provision of services to participants — in publicly funded programs,” Scott and Rep. Joyce Beatty, D-Ohio and the chair of the Black Caucus wrote in a previously undisclosed letter to Speaker Nancy Pelosi.

“We believe that allowing such discrimination financed with public funds collected from all taxpayers is wrong,” the lawmakers wrote. “We are asking you to oppose any effort to remove or change the nondiscrimination provisions included in the child care and universal preschool provisions of the Build Back Better Act.”

The bill would provide nearly $400 billion to help states build universal prekindergarten and affordable child care programs over six years. It is intended to ensure that the vast majority of families — those with four-person households earning up to $300,000 — spend no more than 7 per cent of their income on child care. Families that earn less than 75 per cent of the state’s median income would pay nothing.

“Nothing in this section shall preclude the use of such certificates for sectarian child care services if freely chosen by the parent,” it says. “For the purposes of this section, child care certificates shall be considered federal financial assistance to the provider.”

At issue is what’s arguably a major change the bill would make in how the federal government treats institutions that receive aid for the care of small children. For decades, low-income families have received funds from the Child Care and Development Block Grant program that they may use at a variety of child care centres. But since those centres are not necessarily considered direct recipients of federal funds, they are not bound by some nondiscrimination laws.

Scott’s legislation would categorize any prekindergarten or child care centre that participates in the new program as a federal financial recipient, requiring it to either comply with nondiscrimination laws or turn away families, the conservative religious organisations argue.

“Religious providers are absolutely eligible to participate in the program — including receiving certificate funding, which is not considered direct federal financial assistance,” an aide to the Senate’s education committee said. “We are working with concerned organisations to ensure this distinction is clear.”

The bill would also prohibit any child care provider from using the funds to perform work on “buildings or facilities that are used primarily for sectarian instruction or religious worship.”

Senate Democrats say they are working to accommodate the religious organisations that object but will not agree to anything that would allow religious providers to discriminate against families that want to enrol children in their facilities. They note that some religious organisations — particularly those with a less conservative worldview — have no problem with the bill, including a few that signed a letter urging its passage.

And civil rights groups have pushed back hard at the efforts to remove the nondiscrimination provision, saying that any institution that wants to receive federal funds must submit to such laws.

But religious organisations that have spent decades successfully steering clear of federal mandates say the legislation could be crippling to their educational programs.

“As a general rule, Catholic schools and most nonpublic schools purposefully avoid federal financial recipient status, because it triggers a whole host of federal regulatory obligations with which nonpublic schools are not currently required to comply,” Michael B. Sheedy, the executive director of the Florida Conference of Catholic Bishops, wrote in a letter last week to Sen. Marco Rubio, R-Fla. “The provisions of most obvious concern include nondiscrimination provisions related to sexual orientation and gender identity that could create religious freedom issues for religious providers.”

Manchin raised the issue at a recent closed-door meeting with Senate Democrats, emphasizing that the church and other faith-based organisations play a crucial role in helping care for many families in West Virginia, according to a person familiar with his comments.

Manchin argued that a little bit of funding would go a long way in helping religiously affiliated institutions provide a quality education for pre-K children, the person said, and he insisted they be eligible for any funds that are available. His position found widespread agreement among the other Democratic senators in the room, said two people familiar with the private discussion who described it on the condition of anonymity. Democrats did not get into the finer details of the dispute during their discussion, they said.

The debate is the latest skirmish in the battle over the role of religious organisations in participating in government programs — and how to include them while ensuring federal nondiscrimination protections that may conflict with their practices and beliefs.

The Civil Rights Act of 1964 made it unlawful for an employer to discriminate against someone because of the “individual’s race, color, religion, sex or national origin.” It exempted church groups and faith-based organisations, but the act made no mention of whether such provisions could be applied if the groups were to accept federal funding.

Former President George W. Bush, through a series of executive orders, made it easier for churches and other faith-based organisations to receive federal money while circumventing certain anti-discrimination laws.

The United States Conference of Catholic Bishops and the Orthodox Union want those practices to stay in place. In recent days, they have made the case to members of Congress that they could not accept money to run preschool or child care programs unless the bill expressly exempts them from anti-discrimination laws, such as Title IX, which protects against discrimination by sex, and the Americans With Disabilities Act, which they argue could require costly upgrades to old buildings, including houses of worship.

“We appreciate that key Senate Democrats have told us that they agree that churches and synagogues must be included, but the devil is indeed in the details,” said Nathan J. Diament, the public policy director at the Union of Orthodox Jewish Congregations of America. “Right now, the way the bill text is drafted, there are details that will deter, if not make it impossible for, faith-based providers to participate.”