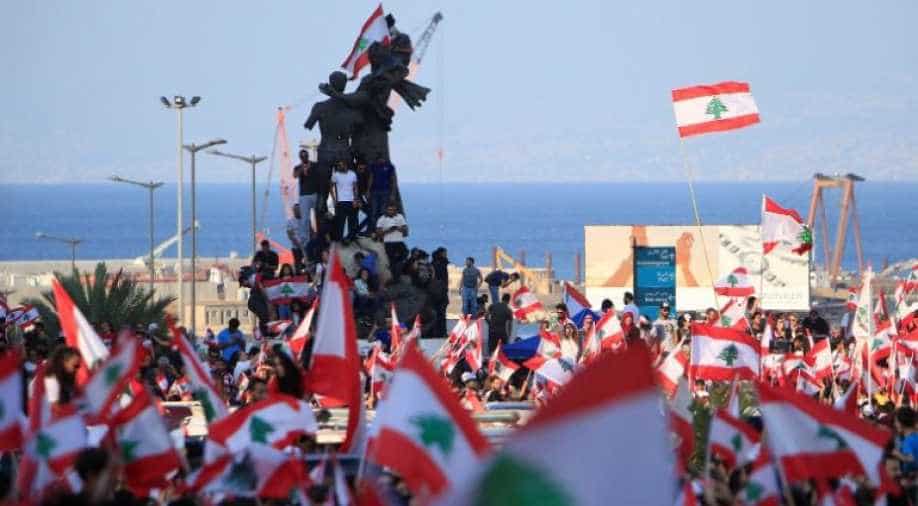 Hundreds of thousands of people have flooded the streets since Thursday, furious at a political class they accuse of pushing the economy to the point of collapse.

Lebanon approved an emergency reform package on Monday in response to protests over dire economic conditions, but the moves did not go far enough to persuade demonstrators to leave the streets or investors to halt a plunge in its bonds.

Hundreds of thousands of people have flooded the streets since Thursday, furious at a political class they accuse of pushing the economy to the point of collapse. Roads were blocked for a fifth day across the country.

Schools, banks and businesses were closed, and Banks are expected to remain shut on Tuesday.

Prime Minister Saad al-Hariri, in a televised speech, said the new measures might not meet the protesters' demands but were a start towards achieving some of them. The government must work to recover trust, he said.

"You are the compass and ... your movement frankly is what led us to this decision today," added Hariri, who said big steps had been taken towards fighting corruption and waste.

But despite the reforms, Lebanon's dollar-denominated bounds suffered hefty losses on Monday following sharp drops on Friday. Some sank to record lows.

Investors said the turmoil showed Lebanon was running out of time to fix its economic problems.

"It is just a mess - and it looks like it is more and more unsustainable. I don't think it is a final nail in the coffin, but it is looking ominous," said Kevin Daly, Senior Investment Manager, Emerging Market Debt at Aberdeen Standard Investments.

"There has been fiscal adjustment, but it has not been enough."

The reforms included the symbolic halving of the salaries of ministers and lawmakers, as well as moves towards implementing long-delayed measures vital to putting the public finances on a sustainable path.

Maya Mhana, a teacher listening to the speech in Beirut with other protesters, was not convinced. "We are remaining in the streets, we don't believe a single word he said," she said.

Protesters sang into the night in Beirut and continued to demonstrate in other parts of the country.

"We don't believe that they can change in two days," said Fadi Abou Dargham, a 55-year-old jeweller.

The protests have been extraordinary because of their size and geographic reach in a country where political movements are normally divided on sectarian lines and struggle to draw nationwide appeal.

Lebanon has one of the world's highest levels of government debt as a share of economic output. The government includes most major parties, run by politicians widely perceived to have mobilised state resources and influence for their own gain.

The economy has been hit by political paralysis and regional conflicts, compounded by strains in the financial system that have risen as inward capital flows have slowed. Unemployment among the under 35s runs at 37 per cent.

Lebanese have started to feel pressures in the financial system more acutely of late, with dollars becoming harder to obtain at the official exchange rate. The pound, pegged at its current rate for two decades, has been under pressure.

The government approved a 2020 budget with no new taxes and a deficit of around 0.6 per cent of national output, Hariri said, describing this as a historic achievement. The deficit for 2019 is around 7 per cent of GDP.

Lebanon's large banking sector would contribute 5.1 trillion Lebanese pounds ($3.4 billion) to deficit reduction, including through an increase in the tax on bank profits, Hariri said.

Steps included abolishing the information ministry and some other state bodies.

The government would accelerate the long-delayed reform of the state-run power sector, which drains $2 billion from the treasury per year while failing to deliver enough power for Lebanese who depend on private generators to fill the gap.

Nassib Ghobril, Byblos Bank chief economist, said the reforms sounded good on paper but there were "a lot of question marks". He criticised the increased taxes on banks, which were hit by a tax hike in 2018. Rampant evasion must be fought.

"The approach seems to have not changed," he said. "The government considers the private sector only as a source of tax revenues instead of working to improve the investment climate, the business climate and raising the economy's competitiveness."