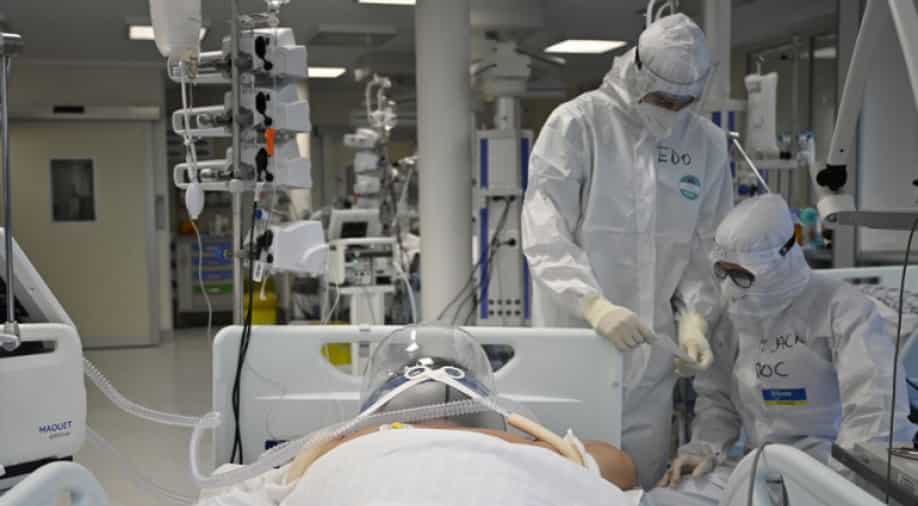 In this file photo, medical staff members stand near to patient using a new non-invasive technology that can reduce the need for intubation at Covid-19 intensive care unit (ICU) at The Institute of Clinical Cardiology (ICC) in Rome Photograph:( AFP )

Amid fear of a 'summer wave,' the European Centre for Disease Prevention and Control (ECDC) has become the first public authority to label both the strains as 'variants of concern'

European health officials have warned that Omicron strains BA. 4 and BA. 5 can escape vaccines and immunity.

Amid fear of a ''summer wave,'' the European Centre for Disease Prevention and Control (ECDC) has become the first public authority to label both the strains as ''variants of concern.''

According to the ECDC, BA. 4 and BA. 5 can trigger an uptick in cases across Europe as they have become dominant in South Africa, where they were discovered in February.

“The presence of these variants could cause a significant overall increase in Covid-19 cases in the EU/EEA in the coming weeks and months,” it said in a statement.

ECDC is worried as 37 per cent of the coronavirus cases in Portugal till May 8 were infected with the BA.5 strain.

Its daily growth rate of 13 per cent is similar to that reported in South Africa as per the Portuguese National Institute of Health.

The institute believes that if this growth rate continues BA.5 will become the dominant variant in Portugal by 22 May 2022.

BA. 4 and BA. 5 can evade immune protection if it has waned over time as most vaccines are effective for only a year from the date of inoculation.

ECDC has asked all countries of the bloc to remain vigilant for signals of BA.4 and BA.5 emergence as its spread can increase pressure on both hospital and intensive care capacity.

“If such signals emerge, a second booster may be considered for some or all adults 60 years and older and for other vulnerable groups,” it said in its report.