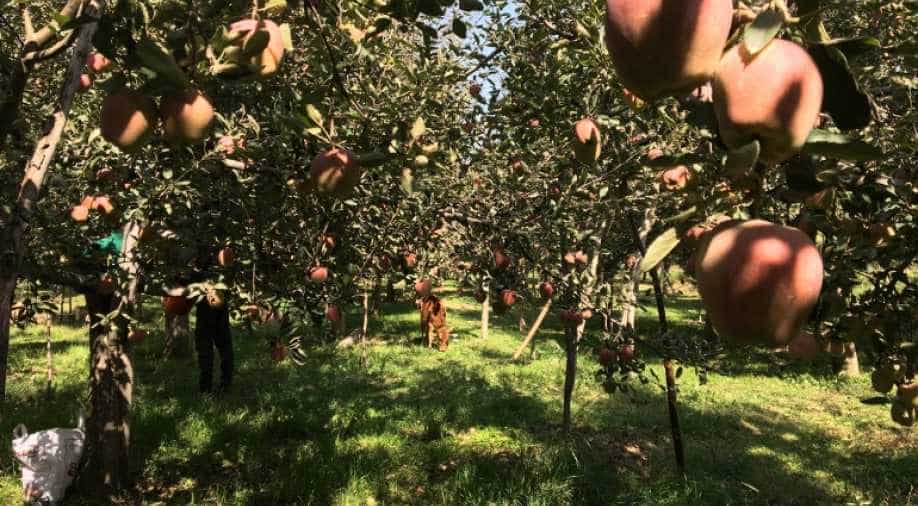 The horticulture department has already declared a bumper crop this year leading to joy among farmers.

The Indian state of Jammu and Kashmir is witnessing a boom in the apple harvest this season. The high-yielding variety of apple plants which have been imported from Europe is helping in the greater outcome of apple production. Every morning with the break of dawn, families gather in their orchards to pick the apples and send them to different parts of India.

The trees are laden heavily with the apples this season in the apple-rich districts of Kashmir valley. The owners of these orchards have a smile on their faces as the crop is above their expectation. The horticulture department has already declared a bumper crop this year leading to joy among the farmers.

Asadullah Bhat's family has been associated with apple farming since generations. Every day he along with his son pack hundreds of boxes from his orchards. Several years back, his son decided to plant the high-yielding variety of apples in his farm which is imported from Europe.

The M-9 and M-6 variety of apple are boosting the rural economy of the state which is, directly and indirectly, helping in the job creation.

"We send these apples to Delhi, Uttar Pradesh, Haryana and other parts of India. We are currently getting a good price for the harvest. On an average, we pack around 2000 boxes," says Asadullah's son Muneeb.

His father adds that his entire family is dependent on the crop each year. "Our generations have been associated with this business. Earlier, we used some of our land for paddy, but we decided to plant apple trees which are more profitable."

Their apples don't just reach the Indian markets but are also imported to countries like Bangladesh, Nepal and Sri Lanka.

This year alone, authorities are looking to surpass the previous year record of 17.9 tonnes after apple trees were brought from Italy and other parts of Europe.

Kashmir valley currently accounts for 71 per cent of national apple production and with time it is expected to grow. The imported breed fetches 25 tonnes while the traditional orchards only produce 12 tonnes. Authorities are also aiming to increase state's horticulture revenue from the current 8000 crore rupees to 50,000 crores a year.

"The Italian variety of apple tree is high-yielding and we don't have to work hard on them. The apples produced by the imported trees are high quality and get good prices in the market," says Nazir Ahmad, a farmer from Shopian district of south Kashmir.

In the afternoon, woman bring laden food on their heads which are later enjoyed by the family. The farmers in the south Kashmir's Shopian district cultivate a variety of apples including the famous delicious and golden. Nearly seven lakh families are dependent directly and indirectly on the apple cultivation in the valley.

Another farmer, Shahnawaz Ahmad says that "it takes 6 to 7 months to get ready. Our delicious and Kuloo delicious are good apples. One tree gives 100 to 150 boxes with time."

With the rise in the production, there are concerns too. The state has fewer storage rooms which could accommodate these apples.

Chief horticulture officer, R.K Kotwal believes that state has the capability to surpass the production of China which is at the highest in the world. He says that with the help of imported breed, the apple production of India will rise at the international level.

"We are importing apple trees from Europe. We are accommodating them more per hectare which is around 300 per hectare. European trees will enhance the outcome and give better quality apples," says Kotwal adding that there is a need to make good storage capacity in the valley.

Another mass extinction led to rise in number of dinosaurs: Study

All-women band in Iran struggles to break through