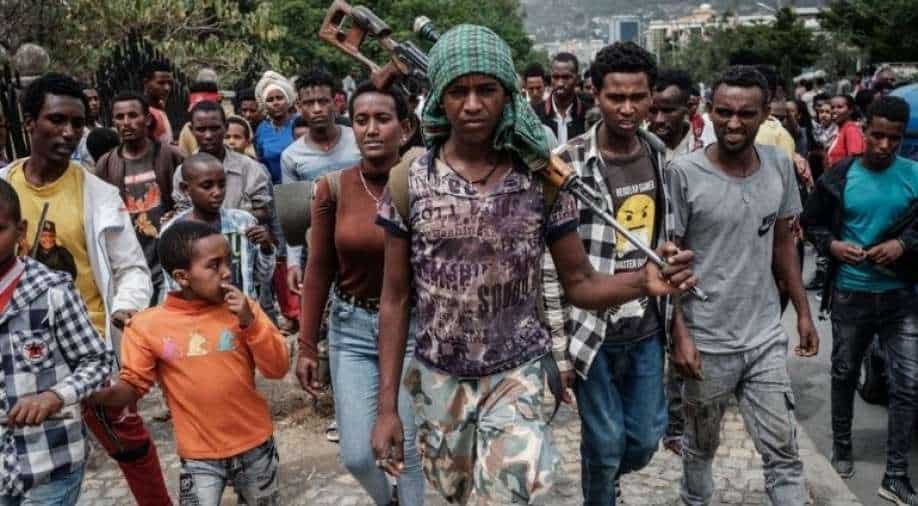 People follow a soldier of Tigray Defence Force (TDF) on a street as he returns in Mekele, the capital of Tigray region, Ethiopia, on June 29, 2021. (File Photo) Photograph:( AFP )

The conflict has been marked by numerous accounts of abuses against civilians, with reports of massacres, rapes and forced displacement

The Ethiopian Human Rights Commission on Saturday called for urgent measures to ensure "the safety and security of civilians" is made a priority in Tigray after eight months of conflict that has left millions facing famine.

The region of northern Ethiopia, a country of about 110 million people, has been riven by fighting since Prime Minister Abiy Ahmed in early November sent the army to topple the dissident leadership of the Tigray People's Liberation Front (TPLF).

After declaring an early victory, the operation turned into a long-lasting and bloody conflict between pro-TPLF forces, the Tigray Defence Forces (TDF), and the Ethiopian army.

Confusing matters, the Ethiopian military was supported by troops from neighbouring Amhara regional authorities and the army of Eritrea, which borders Tigray.

The conflict has been marked by numerous accounts of abuses against civilians, with reports of massacres, rapes and forced displacement.

More than 400,000 people have "crossed the famine threshold" in the region and another 1.8 million people "are on the verge of starvation", a senior UN official estimated at a public meeting of the Security Council on Friday.

NGOs and the World Food Programme (WFP) raised the alarm on Friday over the destruction this week of two bridges that provide vital road access after the TDF retook the regional capital Mekele.

The Ethiopian government denied any responsibility after it was accused of destroying the bridges to prevent humanitarian aid arriving.

"The Ethiopian Human Rights Commission expresses its deep concern about the situation of civilians in the Tigray region" and "urges that urgent measures be taken to ensure their safety and security," the independent but federal government-affiliated body said on Saturday.

"The safety and security of civilians must remain a priority," it said.

With electricity and telecommunications cut off and many roads impassable, it stressed the importance of "transparency and clarity on the current security and humanitarian situation".

The commission called on all parties to respect the ceasefire, unilaterally declared on Monday night by the federal government and described by the TDF as a "joke".

The pre-war TPLF government in Tigray on Friday pledged its support for the UN and organisations "working to provide vital assistance" to Tigrayans, saying it was "committed to facilitating humanitarian access".

At the Security Council meeting, UN Under-Secretary-General for Political Affairs Rosemary DiCarlo also urged the TDF on Thursday to "immediately and fully endorse the ceasefire".

In Addis Ababa, the commission also said it was monitoring reports of "arrests of media personnel and residents of Tigray ethnic origin suspected of connection with the ongoing situation in the region", pointing to a "risk of ethnic profiling".