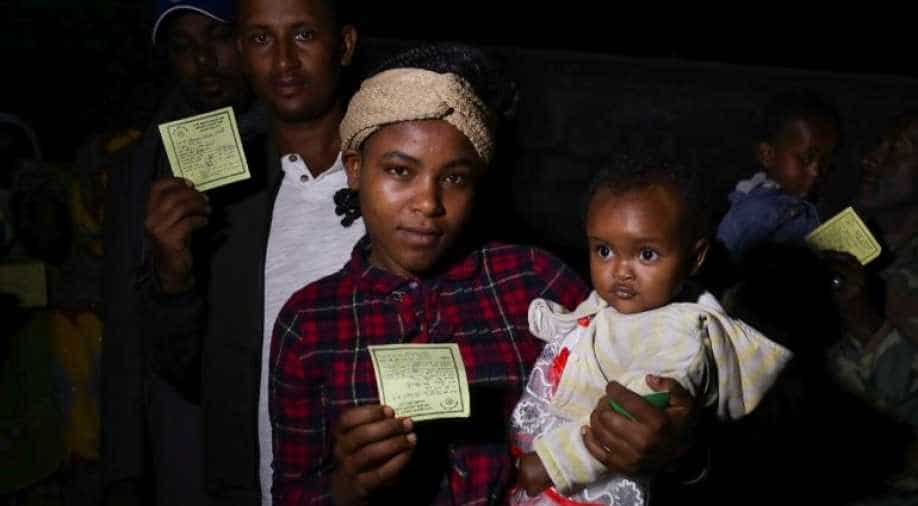 File photo: Emnet Telahun shows her voting card as she waits in a queue to cast her vote during the Sidama autonomy referendum in Hawassa, Ethiopia on November 20, 2019.  Photograph:( Reuters )

Wednesday’s ballots grant the Sidama community, who constitute 4 per cent of Ethiopia’s population, their own self-governing region, the tenth of its kind in the African country.

Ethiopia’s minority Sidama community voted in favour of forming their own federal region last Wednesday after a referendum. 98.5 per cent of the voters choose an autonomous rule, the country’s electoral board declared.

With official results released on Saturday by Wubshet Ayele, Deputy Head of the National Electoral Board, the board showed a provisional voter turnout of 99.7 per cent.

Wednesday’s ballots grant the Sidama community, who constitute 4 per cent of Ethiopia’s total population of 105 million, their own self-governing region, the tenth of its kind in the African country.

The region is going to grant the fifth largest ethnic group of the country control over local taxes, education, security and certain legislation. They have demanded to leave the diverse Southern Nations, Nationalities and Peoples' Region one of the nine regional states for years.

More than 80 ethnic groups of Ethiopia are granted the right to demand autonomy by its constitution. However, it was only under the leadership of Abiy Ahmed that the community’s request for a referendum was approved.

Soon after the polls opened for the referendum Prime Minister tweeted “The Sidama referendum is an expression of the democratisation path Ethiopia has set out on. As citizens go out to vote today, I call upon all to engage peacefully throughout the process.”

The Sidama referendum is an expression of the democratization path Ethiopia has set out on. As citizens go out to vote today, I call upon all to engage peacefully throughout the process.

At least 17 people were killed in July due to clashes between security forces and Sidama activists as a result of the government’s decision to delay polls by five months.

Sidama activists had submitted their request for a referendum last year when Abiy Ahmed took office, which according to the constitution should have been held within a year of the request, with July 18 being the deadline.

However, large scale violence was avoided as opposition groups conceded to the government’s demand for a five-month delay.

Ever since Abiy Ahmed took office in one of Africa’s most repressive states, Ethiopia has been making rapid changes to create a more encompassing society, while also leading a peace process with Eritrea, efforts for which won the prime minister a Nobel Peace Prize this year.

However, greater freedoms have led in the eruption of long-repressed discontent among ethnic communities, leading to more than a dozen other communities debating whether to demand similar autonomy under Ahmed’s reforms.

According to the United Nations and other monitoring groups, more than two million were displaced and hundreds killed in 2018 as a result of these rising tensions.

The closely watched referendum which was declared the achievement of a lifetime after decades-long struggle for autonomy by Sidama voters was stated to be peaceful with no major irregularities by Ethiopia’s Human Rights Commissioner Daniel Bekele.

The referendum and its implementation are being seen as a test to whether ethnic violence in the country can be resolved peacefully and also for its electoral process as general elections are scheduled for May next year.