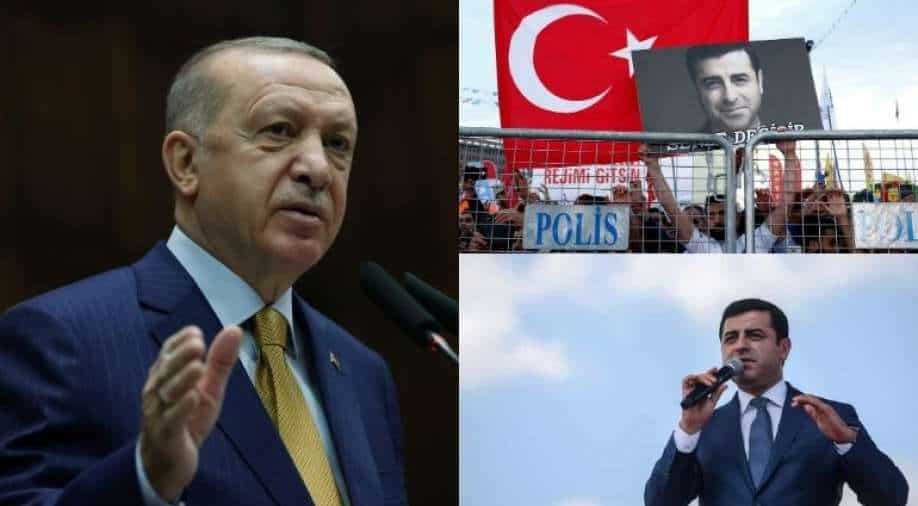 Erdogan said the European Court of Human Rights (ECHR) issued an "entirely political" ruling by publishing a judgement before Demirtas had used up all his legal challenges in Turkish courts.

The Grand Chamber of the ECHR said Demirtas - who is charged with terrorism-related offences - had had his rights violated under five different categories, including freedom of expression and liberty.

Lawyers for the former co-leader of Turkey's main Kurdish political party called the ruling "historic" and Western allies urged Ankara to act. But while such rulings are legally binding, Turkey has not implemented them in several past instances.

Demirtas faces a sentence of up to 142 years in prison if convicted of being the leader of a terrorist organisation over his actions during protests in 2014 that turned violent and led to the deaths of 37 people. He denies any wrongdoing.

Protesters in Turkey's mainly Kurdish southeast that year accused the army of standing by as Islamic State militants besieged the Syrian Kurdish town Kobani, just across the border.

The ECHR said it saw no evidence in decisions on Demirtas' detention that linked his actions and the alleged offences.

"The Court concluded that the reasons put forward by the authorities for the applicant's pre-trial detention had merely been a cover for an ulterior political purpose, which was a matter of indisputable gravity for democracy," it said in its finding.

"It has now become certain," Demirtas said in a Twitter post responding to the ruling, "that the so-called judicial processes led against me and my friends for six years are all political, not lawful, (and) that we are innocent."

His lawyers said the ruling was one of the toughest judgments on rights violations in Turkey and was "final and binding".

Ankara accuses Demirtas' Peoples' Democratic Party (HDP) of ties to the militant Kurdistan Workers Party (PKK), which has waged an insurgency in the southeast since 1984 and is deemed a terrorist group by Turkey, the United States, and European Union. The HDP denies having any connections with terrorism.

The HDP, chaired by Demirtas from 2014 and 2018, has seen thousands of its officials and members arrested in recent years.

In 2018, a chamber of the ECHR ruled that Demirtas' right to a speedy trial had been violated.

President Tayyip Erdogan responded at the time that Turkey would counter the ruling. Shortly afterward an appeals court approved a jail sentence against Demirtas for disseminating terrorist propaganda in a 2013 speech, sealing his conviction.

The ECHR said Demirtas' continued detention on such similar grounds "would entail a prolongation of the violation of his rights".