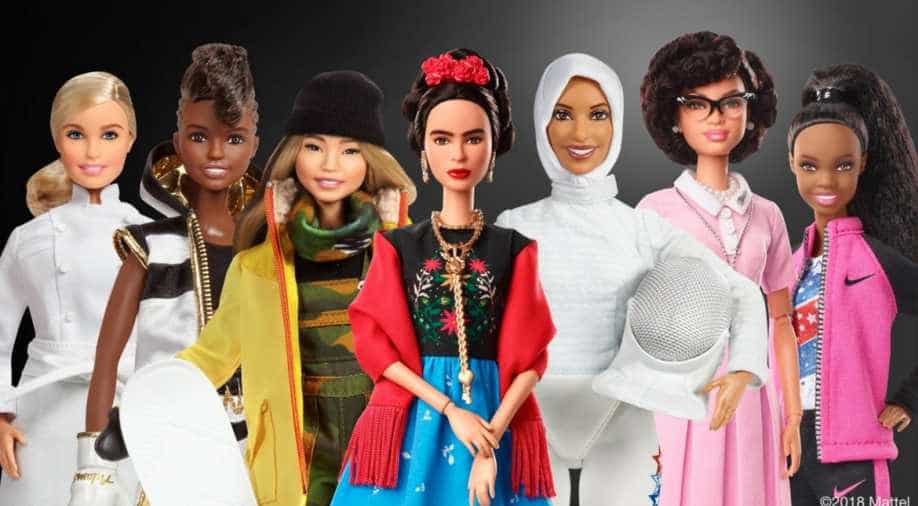 Barbie released a new set of dolls ahead of International Women's Day on March 8. Photograph:( Twitter )

One of the world's biggest doll manufacturer brand, Barbie, introduced a new batch of dolls based on real-life women figures Tuesday, just a day ahead of International Women's Day.

As a mark of commemorating International Women's Day that is observed every year on March 8, Barbie introduced new dolls in two categories -- 'Inspiring Women' and 'Sheroes'. While the first, 'Inspiring Women' dolls are historical figures, packed with educational information about the contributions that each woman made to society; the second set 'Sheroes' features inspirational contemporary women that highlight real women who have broken boundaries in their field.

In honor of #InternationalWomensDay, we are committed to shining a light on empowering female role models past and present in an effort to inspire more girls.

The new set of dolls by Barbie maker, Mattel comes after they conducted a survey of more than 8,000 mothers around the globe and found that 86% are worried about the kind of role models their daughters are exposed to.

In a press release, Lisa McKnight, senior vice president and general manager of Barbie said, "Girls have always been able to play out different roles and careers with Barbie and we are thrilled to shine a light on real-life role models to remind them that they can be anything."

With 86% of US moms worried about the type of role models their daughters are exposed to, we are committed to shining a light on empowering female role models in an effort to inspire more girls.

The new set of dolls stand in tandem of Barbie brand's highest honour --  one-of-a-kind doll made in a real woman's likeness.

Among some of the most notable additions, 'Inspiring Women' includes Amelia Earhart (first female aviator to fly across the Atlantic Ocean), Frida Kahlo (renowned Mexican artist and activist), Katherine Johnson (a pioneer in mathematics who broke barriers of race and gender-- also a part of pool of women hired by NASA to work as human "computers" for the first US-manned flight into space).

Can't express how totally mind blowing and delightful it is to have your childhood favorite resemble you!! Thank you @Barbie, for this incredible honor, and for celebrating all kinds of women, everywhere. What a great way to inspire the girls of tomorrow! pic.twitter.com/X5FteJQltn

Ahh! Im so happy to be honored as a @Barbie Shero alongside these incredible women! #InternationalWomensDay #Barbie pic.twitter.com/U0J7ajM0Sd

Proud to partner with @Barbie this #InternationalWomensDay to show girls – YOU CAN BE ANYTHING!#Ad pic.twitter.com/nMdT7jMK8L

The dolls will start to roll out to stores soon and are currently available for pre-sale on the official Barbie website.