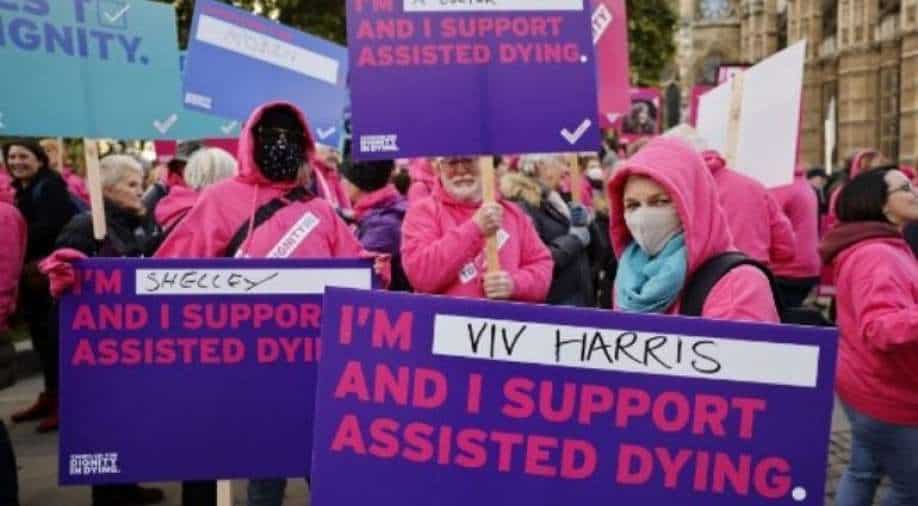 In this file photo taken on October 22, 2021 'Dignity in Dying' supporters gather to call for a change in the law to support assisted dying outside the Houses of Parliament in central London. Photograph:( AFP )

A person makes a formal request to their doctor for assisted dying, and an attending medical practitioner undertakes a first assessment to determine their eligibility.

In the first three months after it became legal, at least 28 New Zealanders have been assisted in dying.

After two-thirds of Kiwis (65.1%) voted it through in the 2020 referendum, the End of Life Choice Act went into effect on November 7, allowing qualified terminally ill New Zealanders to choose to end their lives.

In the three months since assisted dying became legal, there have been more than two dozen assisted deaths, according to Ministry of Health data as of January 31.

Because the data is updated every week, it's possible that more people have been helped to die since that figure was released.

A person (over the age of 18) must have a terminal illness that will end their life within six months to be eligible for assisted dying under the Act.

They must be experiencing significant and ongoing physical decline, as well as unbearable suffering that cannot be alleviated in a way that they find acceptable.

So far, the registrar has not received any objections from the End of Life Review Committee, which investigates every death.

The public had lodged "a very limited number of complaints," according to the Registrar, but the ministry stated it couldn't disclose any additional information at this time.

It may also be unable to provide information on the fatalities, such as age, medical problems, or ethnicity.

Patients must be evaluated by two doctors, with a third opinion from a psychiatrist required if the doctors have any reservations about the patient's competency.

According to the Ministry, none of the 56 people who had two assessments needed a third.

In New Zealand, 130 medical practitioners have signed up to participate in assisted dying.