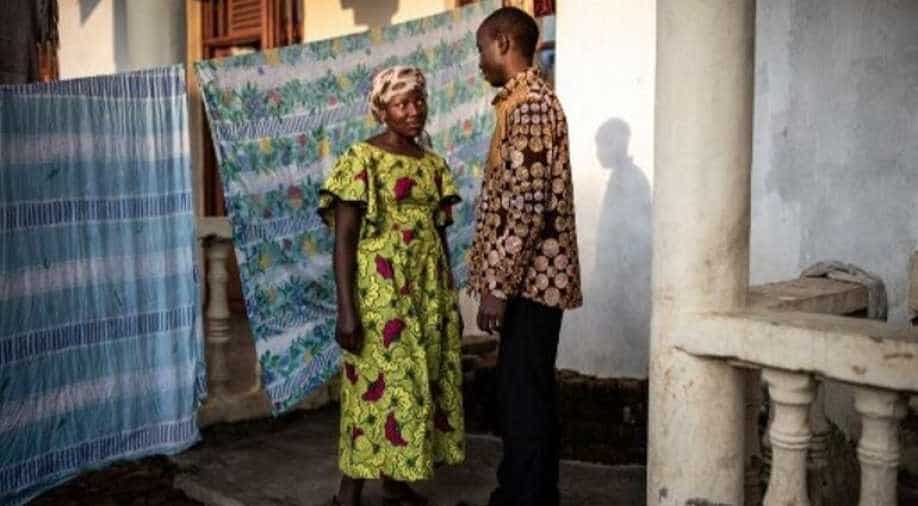 Maurice, 35-years-old, and Esperanze, 26-years-old, both Ebola survivors are seen outside their home in Beni in the northeastern Democratic Republic of the Congo on September 17, 2019. Maurice was a doctor working in Mangina when he contracted the virus from a patient he received back in July 2018 before the outbreak was made official. He then passed the virus onto his wife. Maurice is now the head of the survivors association for the response. Since the beginning of the Ebola epidemic in August 2018 there has been over two thousands deaths and now nearly 1000 survivors. Photograph:( AFP )

More than 2,100 people have died from Ebola in Congo since the hemorrhagic fever resurfaced in August 2018.

As health agencies battle to stop the spread of the Ebola virus in eastern Democratic Republic of Congo (DRC), some survivors of the disease are playing a crucial role in aiding the victims of the worst outbreak in the country's history.

More than 2,100 people have died from Ebola in DRC since the hemorrhagic fever resurfaced in August 2018.

Containment efforts have been hindered by the conflict in the country's east, as well as attacks on health workers tackling Ebola in a population where mistrust of outsiders and superstition is rife.

That's where survivors come in.

A 35-year-old doctor who identified himself as Maurice, contracted the virus while caring for a patient in July 2018 before the outbreak was officially confirmed.

He then passed the disease on to his wife, Esperance.

Both survived and Maurice is now the head of the Ebola survivors association for the response to the outbreak.

Survivors of Ebola become immune to the disease, allowing them to interact with sufferers without protective clothing.

Ebola is contagious and causes patients to often die from dehydration and multiple organ failure.

Viannay Kambale, 31, survived the virus and now works with patients at an Ebola treatment centre, as he has immunity.

Another survivor, Claude Mabowa, lost his mother, a brother, and a sister to Ebola, according to an NGO called Alima.

"There are people who approach me, and others are moving away", the 21-year-old said, about peoples' reaction to him in public.

"It bothered me a lot", he told a local Kinshasa radio station.

United Nations (UN) Chief Antonio Guterres visited Beni in the country's Ebola-plagued eastern Congo earlier this month and urged people who might be infected to visit their nearest health centre for a checkup.

"It is worth coming. There are people who might think: 'Well, I'm going to die, why should I go? No, it's not true. Those who come here can be cured. We must transmit this message to everybody. Don't hide your symptoms. Come", he said after meeting Ebola survivors.