Timeline: How a Congo Ebola outbreak became a global concern 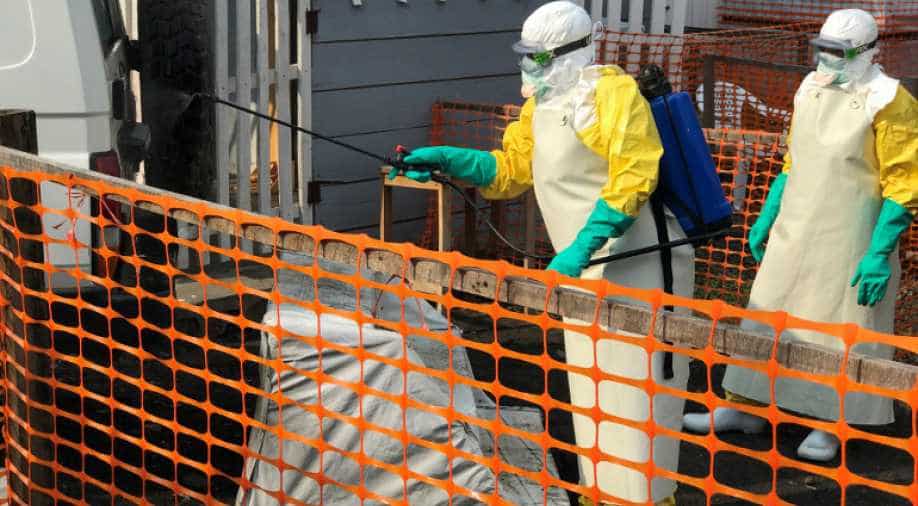 A health worker sprays disinfectant on an ambulance at a Health Centre in Goma, Democratic Republic of Congo, July 18, 2019. Photograph:( Reuters )

The World Health Organization has declared Congo's Ebola outbreak an international health emergency, after the virus threatened to spread to a major city and into neighbouring countries.

The response has been hampered by frequent militia violence and low public trust. Below is a timeline of the latest Ebola epidemic.

Congo health ministry declares four cases in the eastern town of Mangina, 100 km from the Ugandan border in a province beset by militia violence. It marks the start of Congo's 10th Ebola outbreak since 1976.

The announcement comes eight days after another Ebola outbreak in western Congo was successfully contained with the use of an experimental new vaccine from Merck.

WHO head Tedros Adhanom Ghebreyesus says he is confident in Congo's ability to contain the virus. WHO sends staff and supplies.

The WHO says the virus is likely spread over tens of kilometres and poses a high regional risk given its proximity to borders.

Health officials in Mangina rush to educate the public about the risks of Ebola and how to stop its spread.

Ebola identified as the deadliest Zaire strain, for which however an experimental vaccine exists.

Congo and WHO begin vaccinating health workers. 43 people are believed to have been infected including 36 who have died. 900 contacts are identified for monitoring.

Militia violence prevents aid workers from reaching some potential cases. Over 2,000 people have been potentially exposed to the virus.

First Ebola death recorded in trading hub of Butembo, a city of almost a million with links to Uganda. Death toll hits 85.

The WHO says it is "extremely concerned" about the outbreak as the death toll reaches 100, two days after militias kill 12 civilians in the town of Beni, near the outbreak's epicentre.

WHO emergency committee falls short of declaring a public health emergency of international concern, but warns it will worsen unless the response is stepped up. Death toll hits 139.

Outbreak becomes the second biggest ever, with 426 cases and 245 deaths, the health ministry says. The West Africa outbreak in 2013-16 killed over 11,000 people.

Ebola cases hit 1,000, five days after the virus is detected in Bunia, a city with close to 1 million people.

WHO says the outbreak still does not constitute an international emergency.

The death toll rises above 1,000. Attacks on treatment centres by armed groups continue.

A mob in Vusahiro village kill an Ebola health worker and loot a clinic. WHO says between Jan and early May, there were 42 attacks on health facilities, with 85 workers either injured or killed.

Ebola cases top 2,000 as the rate of new cases triples.

Uganda confirms its first case, a 5-year-old Congolese child who dies the next day. A day later, two new cases are reported.

First case detected in Goma, with a population of more than one million. The patient, a priest, is pronounced dead by authorities two days later.