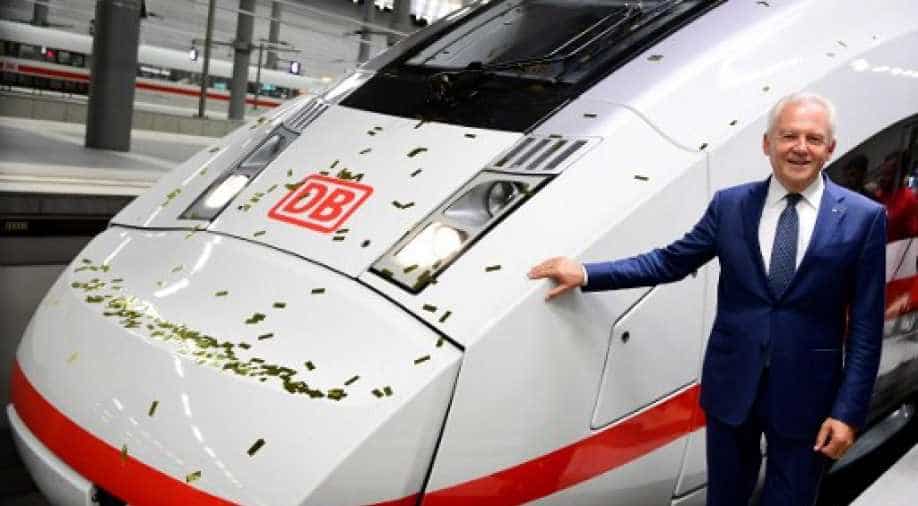 With a single 1970s train in orange livery and a little crowdfunding help, a plucky Berlin start-up is challenging the might of Germany's state rail operator, Deutsche Bahn.

At 6:20 am (0520 GMT) on Wednesday, the first Locomore train will leave Stuttgart in Germany's southwest, pass through Frankfurt and Hanover and pull into Berlin, its final destination, some six and a half hours later.

With just one return service a day to start with, compared to the over 700 daily long-distance journeys run by Deutsche Bahn, Locomore founder and director Derek Ladewig knows he barely qualifies as a rival.

But he is hoping to win over Deutsche Bahn customers with budget ticket prices and lure environmentally-conscious travellers from more polluting forms of transport.

"We are offering a new service to compete with the car, the plane, the long-distance bus as well as Deutsche Bahn," Ladewig told AFP.

Locomore, which bills itself as the world's first crowdfunded train line, owes its start-up capital entirely to online supporters who chipped in more than 600,000 euros ($640,000) in less than a year to get the project on the rails.

Many of the contributors bought vouchers that can now be traded for tickets, as well as souvenirs such as mugs and T-shirts in the firm's distinctive orange hue -- a nod to the vintage origins of Locomore's renovated carriages from the 1970s.

- Popular with families -
The 600-kilometre (370-mile) trip from Stuttgart to Berlin takes slightly longer than with Deutsche Bahn, but Locomore hopes to make up for that by promising its ticket prices will always be cheaper than those of its competitor.

By comparison, Locomore charges 22 euros for a Stuttgart-Berlin ride in January, compared with 115.90 euros on Deutsche Bahn -- although the latter's journey is roughly an hour shorter, and it offers prices as low as 29 euros for travellers willing to change trains once or twice.

Karl-Peter Naumann, a spokesman for the passenger group Pro Bahn, welcomed the new player on the block and said the service should prove popular with families, who will be offered their own compartments, and with young people.

The country's rail sector was liberalised in 1994 but remains dominated by Deutsche Bahn, which carries more than 5.5 million passengers a day in Germany alone and accounts for 99 percent of all long-distance rail journeys.

The state firm has more competitors on the regional transport networks, where its market share falls to 72 percent, according to Mathias Lahrmann of the BSL transportation consulting agency.

Locomore is not the first private company to try to go up against the rail operator, but those efforts have gained little traction.

"Locomore could invigorate the market with its innovative ideas," said Lahrmann. But "like HKX, it only serves a niche market", he added.

Lahrmann said it was difficult for new companies to get a foot in the door in the long-distance rail business.

There are no state subsidies available, and prospective operators are expected to reserve their slots years in advance as well as source their own trains.

To give itself maximum flexibility, Locomore has opted to rent its trains and drivers from other companies while employing its own on-board personnel and handling ticket sales.

Ladewig has calculated that at least half of Locomore's seats need to be filled to cover costs and be able to branch out to other lines in the future.

Achieving that will be no mean feat, as even Deutsche Bahn last year registered an occupancy rate of just 50.9 percent on its long-distance trains.

"It's not easy to be profitable, but it's possible," said BSL consultancy's Lahrmann.

With more than 10,000 tickets already sold and its trains promising to be "pretty full" over the coming weekends, Locomore's Ladewig is banking on the upcoming Christmas holidays to keep his ambitious plans on track.