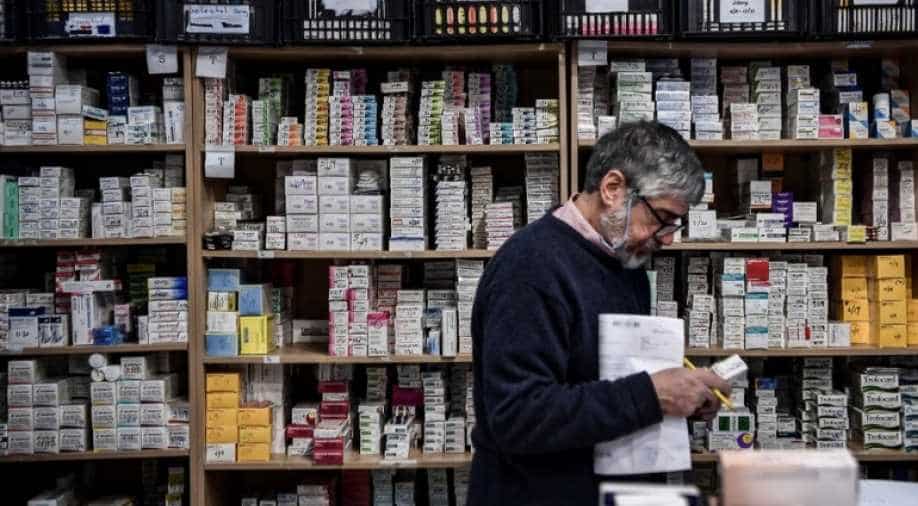 Amid derelict stadiums dating from the 2004 Athens Olympic Games, the volunteer-staffed social pharmacy of Hellinikon has handed out free medicine to hundreds of poverty-stricken patients, keeping some of them out of death's reach.

Every month, when his respiratory medicine runs out, Dionysis Assimakopoulos heads to the most unlikely pharmacy in Athens.

Amid derelict stadiums dating from the 2004 Athens Olympic Games, the volunteer-staffed social pharmacy of Hellinikon has handed out free medicine to hundreds of poverty-stricken patients, keeping some of them out of death's reach.

"My wife and I have been unemployed for over two years. We need about 150 euros for medicine every month," says Assimakopoulos, a former baker.

Established at the height of the crisis in 2011, the pharmacy runs on donated medicine and disposables. Some 40,000 people have brought medicine, many from abroad, says on-duty pharmacist Dimitis Palakas.

Another patient waiting in line is Achilleas Papadopoulos, a retired tenor. His pension of 700 euros is not enough to cover the antibiotics he has come for.

During nearly a decade of cuts imposed as Greece struggled to avert national bankruptcy, public education and health were among the sectors hit the hardest as the country lost a quarter of its national output.

Amid sweeping layoffs, wage cuts and tax hikes, many could not maintain their social insurance contributions and were pushed out of state-provided health support.

According to the national statistics service, Greeks paid 34.3 per cent of their medical expenses out of their own pocket in 2016.

The crisis exposed "huge state shortages", says Petros Boteas, a member of the Hellinikon health team, which serves over 500 patients every month.

"There are fewer doctors and hospital staff. Money for medicine has been cut. There is a long waiting list for doctor's appointments... we had a cancer patient given an appointment in three months," he told AFP.

To avoid a long wait -- especially in an emergency -- many are forced to seek private healthcare, regardless of the cost. There are currently over 120 private clinics in the country.

'Go to a better school'

A similar scenario casts its shadow over education.

When Aspasia Apostolou's son was 11 years old and finishing Greek public primary school, his class teacher did something unexpected.

"He told us our son is bright and that he should be in a better school," says Apostolou, a 44-year-old lawyer.

According to the government, public funding for education fell by about 36 per cent during the crisis.

Thousands of trained staff including teachers and doctors emigrated -- part of an exodus of some 350,000 people -- or opted to retire.

A recent study by the London School of Economics found 75 per cent of Greek crisis emigrants holds university degrees.

The OECD in a 2017 study -- prepared at Greece's request -- said austerity cuts had "a major impact on the demands on the Greek education system, and on those working within it."

It said that in 2015, there were approximately 25,000 posts vacant for teachers in primary and secondary education schools.

Apostolou now pays 5,800 euros ($6,500) a year in tuition fees at a private school where her son can be assured of a well-structured curriculum.

"At our old school, the children usually come home early. So many school hours are lost because of teacher shortages during the year," she says.

"There is no evaluation, no reward for effort in a public school. You wallow in mediocrity."

While school books are provided by the state free of charge, the cuts continue to affect other essential resources including computers and petrol for heating.

It is not uncommon for schools to be shut down for lack of heating. The last instance was in February at the Athens school complex where Prime Minister Alexis Tsipras himself was a pupil.

"I've worked in schools where the principal or teachers or parents paid out of their own pocket for essentials... or discreetly brought food to needy families," says Athanassia. She has worked in 20 public schools as teachers are shared out to plug staffing gaps.

"Whatever works is based on filotimo," she adds. "If funding were better, it would be totally different."

According to the Greek statistics agency, around 12 per cent of the country is near the poverty level.

In response, Tsipras's government in 2016 began a programme giving out free school meals at hundreds of schools in poorer regions.

"It's a step forward, but inequalities persist," says Petros at the Hellinikon clinic.

"Without health insurance, securing a public hospital appointment might take six months, even for critical examinations."