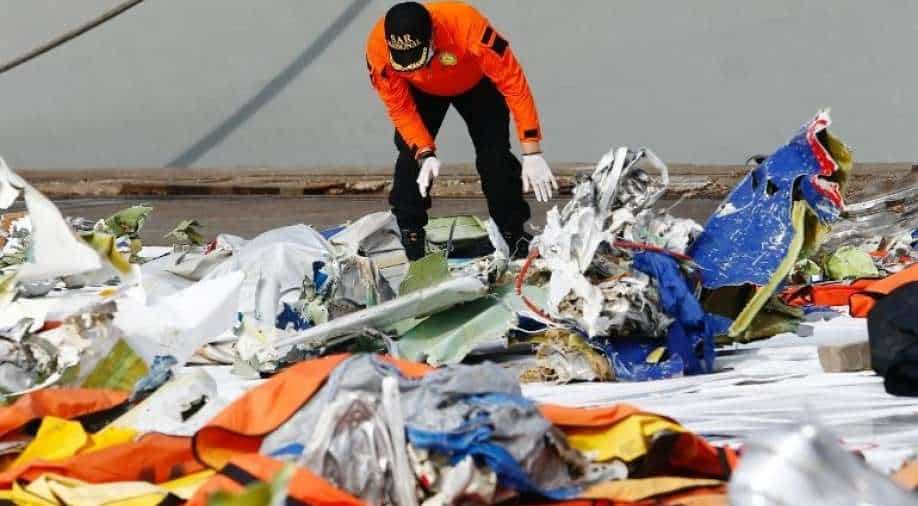 A member of Indonesia's rescue personnel observes the debris of Sriwijaya Air flight SJ 182, which crashed into the Java Sea, at the last day of the search and rescue operation, at Tanjung Priok port in Jakarta, Indonesia Photograph:( Reuters )

The Sriwijaya Air plane that crashed last month killing 62 people had an imbalance in engine thrust that eventually led the plane into a sharp roll and then a final dive into the sea, a preliminary report by investigators said on Wednesday.

The 26-year-old plane, previously flown by US-based Continental Airlines and United Airlines, plunged around 10,000 feet (3,000 metres) and crashed into waters off Jakarta just minutes after takeoff.

On Wednesday, investigators said they were probing the autothrottle system as they published their interim report.

"The left (engine throttle) was moving backward too far while the right one was not moving at all -- it was stuck," said National Transportation Safety Committee investigator Nurcahyo Utomo.

"But what would have caused this anomaly? We can't conclude anything just yet."

Authorities have previously said the crew did not declare an emergency or report technical problems with the aircraft before its dive, and that it was probably intact when it hit the water.

They cited a relatively small area where the wreckage was scattered and details from a retrieved flight data recorder, one of two so-called "black boxes", showing the engine was still running just before it crashed.

Communications with air traffic control were described as normal up until the moment that the plane sharply deviated from its intended course and crashed.

At about 10,900 feet, the autopilot disengaged and the plane rolled to the left more than 45 degrees and started its dive, according to the report.

The Sriwijaya accident is Indonesia's third major airline crash in just over six years and has shone a spotlight on the country's poor air safety record.

Starting with just one plane in 2003, Sriwijaya has become the country's number three airline group, aided by its strategy of acquiring old planes at cheap prices and serving routes neglected by competitors.

There had been two prior problems reported with the autothrottle system that automatically controls engine power based on maintenance logs, but the issue was rectified on Jan. 5, four days before the crash, KNKT said.

A working autothrottle is not required for a plane to be dispatched as pilots can control the thrust levers manually with their hands.

Divers are still searching for the plane's cockpit voice recorder which could help investigators understand the actions taken by the pilots, both of whom were experienced with 17,900 hours for the captain and 5,100 hours for the first officer.

The report highlighted the importance of upset recovery training for pilots and the recognition of repetitive plane defects, just over six years after an AirAsia Indonesia crash where those were among the issues raised.

KNKT said that following the crash Sriwijaya had taken safety actions including adding upset recovery training in its next pilot proficiency check and reminding engineers that repetitive defects must be handled in accordance with safety manuals.

The airline sent a memo to pilots reminding them to write detailed reports to help engineers troubleshoot problems.

The Directorate General of Civil Aviation also discussed the handling of repetitive problems and upset prevention and recovery training with other Indonesian operators after the crash, KNKT said.

Boeing said it would continue to support the investigation.

The preliminary report, as is standard, laid out factual information obtained to date but did not list the contributing factors to the crash. That will require further investigation.

Safety experts say most air accidents are caused by a combination of factors that can take months to establish. Under international standards, the final report is due within a year of the crash.