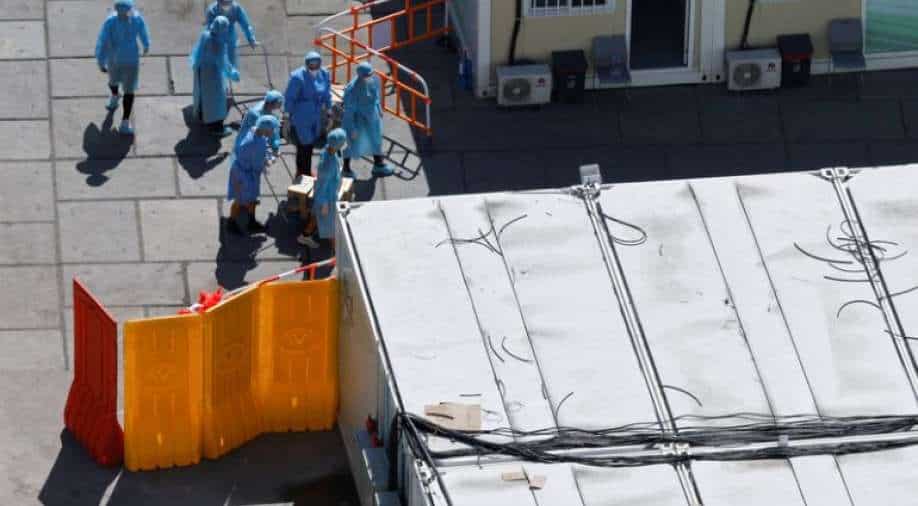 The fast-spreading Omicron variant has tested both strategies but Hong Kong is now suffering the consequences of a relatively low vaccination rate, especially among the elderly, as the virus surges through the community

A top Chinese health official rallied embattled Hong Kong on Tuesday to stick with a "dynamic zero" coronavirus strategy and warned that the city's "lifeline" health system was at risk and the situation had to be turned around as soon as possible.

Hong Kong reported more than 43,100 new cases on Tuesday after the launch of an online platform for people to record infections in a surge that has seen the city suffering the most deaths globally per million people in the week to March 6, according to the Our World in Data publication.

China has championed the "dynamic zero" strategy that involves stamping out infections with strict mitigation measures as opposed to the approach adopted in other places of relying on high vaccination rates and moderate mitigation like masks in an effort to "live with COVID".

The fast-spreading Omicron variant has tested both strategies but Hong Kong is now suffering the consequences of a relatively low vaccination rate, especially among the elderly, as the virus surges through the community.

"Reducing infection, severe cases and deaths is Hong Kong's most urgent and top priority at the current stage," said Liang, who is in Hong Kong to coordinate efforts to battle the outbreak.

"After we achieve the first target, we will then move on to the second and third goals."

Infections in the Asian financial hub have surged to record highs with a total of about 540,000 cases and more than 2,300 deaths - most in the past two weeks.

"Hong Kong is in danger of not being able to function normally," he said.

Compounding Hong Kong's difficulties and public frustration have been contradictory and confusing messages about the campaign against the virus, including a plan for mass testing and whether a city-wide lockdown would be imposed.

Liang said there could be improvements.

"How can more effective and realistic measures be taken to curb the rising momentum of the epidemic and turn the situation around as soon as possible ... This is one of the most important tasks," he said.

Liang's comments came as the city's 7.4 million residents braced for details of the mass testing that is expected to take place in coming weeks. Liang said it would need to be done at the right time with all details carefully arranged.

Health authorities on Monday launched a platform for people to register their own rapid antigen test results.The platform accounted for 14,715 of the new cases on Tuesday.

There were also 160 deaths recorded in the past 24 hours.

A team from the University of Hong Kong has estimated that by the end of April the number of people infected in the city of 7.6 million people could be about 4.3 million, with a death toll of 5,000.

Hong Kong's hospitals, isolation centres and funeral parlours are swamped while public transport, malls, postal services, supermarkets and pharmacies are struggling to operate due to a severe manpower crunch.

Food prices have shot up and supermarket shelves have been emptied every day for a week as shoppers panic buy.