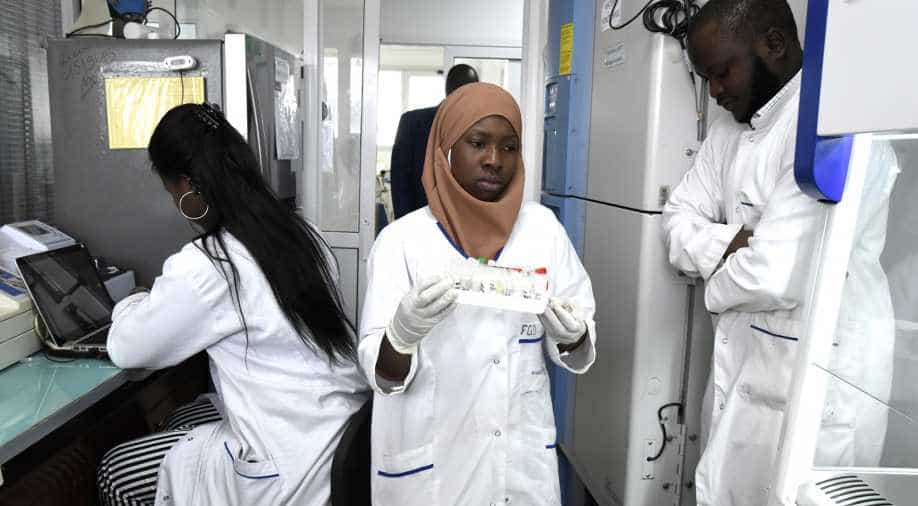 Africa is seen as particularly vulnerable to the disaster, which the IMF has dubbed 'The Great Lockdown' as it warns of the worst financial crisis since the Great Depression

International financial institutions and African leaders warned on Friday the continent needs tens of billions of dollars in additional money to fight the coronavirus pandemic despite debt freezes and massive pledges of support.

In a joint statement, the World Bank and International Monetary Fund said they had each contributed to the $57 billion mobilized by official creditors to support healthcare and economic recovery on the world's poorest continent, while $13 billion came from private funds.

"This is an important start, but the continent needs an estimated $114 billion in 2020 in its fight against COVID-19, leaving a financing gap of around $44 billion," the statement said.

The Washington-based institutions finished up their spring meetings this week, rolling out a slate of financing programs directed at combating the pandemic, which World Bank President David Malpass said could undo development in poor countries.

Africa is seen as particularly vulnerable to the disaster, which the IMF has dubbed "The Great Lockdown" as it warns of the worst financial crisis since the Great Depression.

Experts fear the continent's notoriously weak health systems may not be able to stop the spread of COVID-19 while the combined effects of a slump in demand for minerals and tourism together with lockdowns to stem the contagion could wallop economies.

"This pandemic has already had a devastating impact on Africa and its effects will deepen as the rate of infection rises," South African president and African Union chairman Cyril Ramaphosa said in the statement.

"It is a setback for the progress we have made to eradicate poverty, inequality and underdevelopment."

Deaths from coronavirus hit 1,000 across Africa on Friday, according to an AFP tally, with 19,334 cases recorded.

The IMF expects the continent's gross domestic product to shrink by 1.6 per cent in 2020, "the worst result ever recorded," and the World Bank has warned that the region could slip into its first recession in 25 years.

With many African countries both poor and deeply indebted, the World Bank and IMF this week rolled out new financing tools and beefed up existing ones while also emphasizing debt relief.

The G20 grouping of the world's largest economies agreed on Wednesday to a standstill in debt payments for the world's poorest nations, many of which are in Africa.

Using its redesigned Catastrophe Containment and Relief Trust (CCRT), debuted in 2015 to help west African countries hit by the Ebola epidemic, the IMF approved on Monday a six-month debt payment standstill for 25 countries, with African nations making up the bulk of the relieved.

The World Bank has meanwhile pledged to roll out $160 billion over the next 15 months for health care and economic recovery projects worldwide, while the IMF said 102 countries as of Thursday had asked to tap its $1 trillion lending war chest.

On Friday, the IMF Executive Board announced it had disbursed $886.2 million to Ivory Coast where the economic impact of the coronavirus is expected "to be substantial, with the near-term outlook deteriorating quickly."

The funding is meant to help the country "meet the urgent balance of payment needs stemming from the outbreak."

It similarly rolled out a $111.6 million disbursement to Haiti.

Despite the billions of dollars allocated for the fight in poor countries, Malpass warned "it's clear that it won't be enough."

"If we don't move quickly to strengthen systems and resilience, the development gains of recent years can easily be lost," the World Bank chief said.

For the debtor countries partaking of the bank's $160 billion in financing, "there will be a monitoring of how the governments are using the fiscal space that is created by the debt relief," Malpass said.

The expectation is that such countries would spend their freed-up funds on healthcare, education and bolstering their economy.