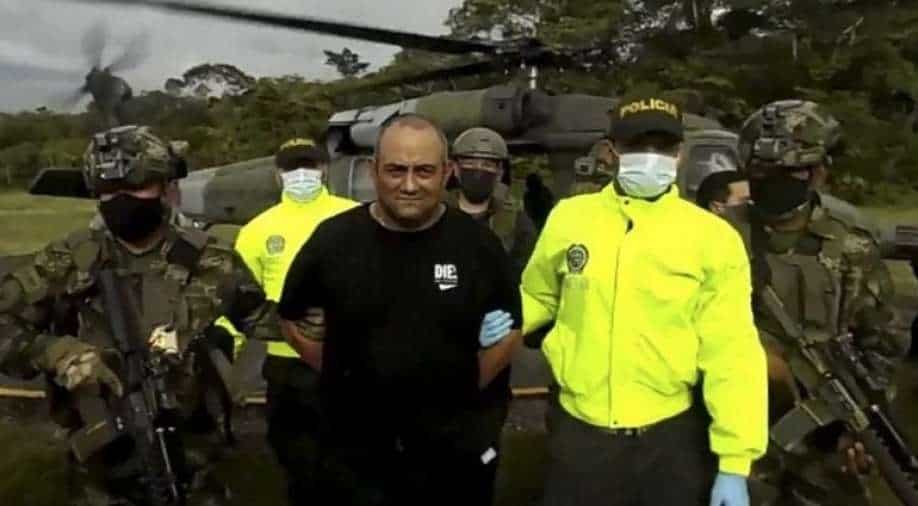 Members of the Colombian Army and police escorting Colombia's most-wanted drug lord and head of the Gulf Clan, Dairo Antonio Usuga alias 'Otoniel' after his capture, in Bogota. Photograph:( AFP )

Colombia's largest narco-trafficking gang ‘Gulf Clan’ head Dairo Antonio Usuga has been captured by security officials. The 50-year-old drug lord can be seen in handcuffs and surrounded by soldiers in pictures. The kingpin, who is also called as Otoniel, was caught near Panama border. He is one of the most feared men in the country

Colombia's largest narco-trafficking gang ‘Gulf Clan’ head Dairo Antonio Usuga has been captured near one of his main outposts in Necocli by security officials.

In the images released by the government, the 50-year-old drug lord, who is also called as Otoniel, can be seen in handcuffs and surrounded by soldiers.

In a message, Colombian president Ivan Duque said, "This is the hardest strike to drug trafficking in our country this century."

Also Read: Biden the dealmaker finds that compromise can have consequences

He added that the arrest was "only comparable to the fall of Pablo Escobar," the infamous Colombian narco-trafficking kingpin.

Otoniel, who was caught near Panama border, is one of the most feared men in Colombia.

The United States had also offered a $5 million bounty for any information, which could lead to his arrest.

Indicted in the United States in 2009, Otoniel faces extradition proceedings to the country. In US, he would appear in the Southern District of New York federal court.

According to the Colombian government, the group was financed mainly through drug trafficking, illegal mining and extortion. It is also being accused of being one of the main drivers of the worst spate of nationwide violence since the signing of a peace pact with FARC guerillas in 2016.

As per independent think tank ‘Indepaz’, the group is present in almost 300 municipalities in the country.