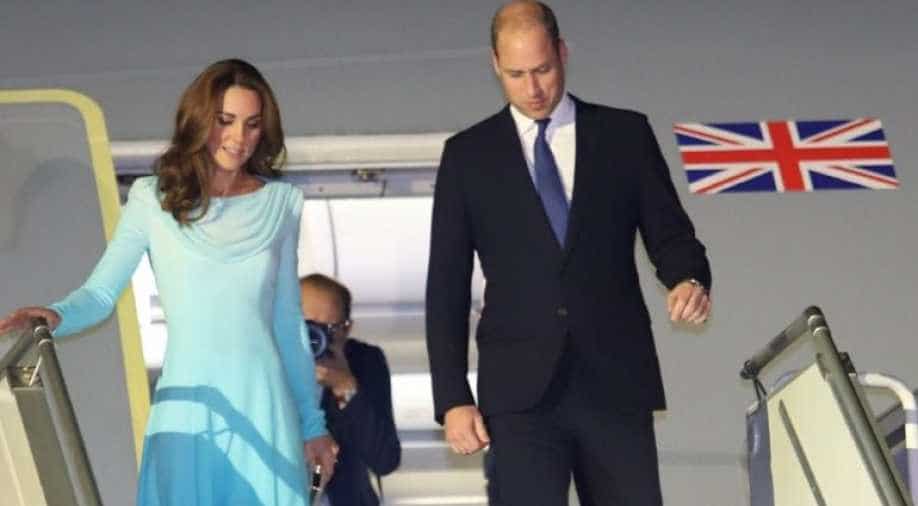 The turbulence from the Thursday evening storm during the flight from Lahore to Islamabad shook the plane so hard that seasoned foreign correspondents said they had never experienced anything like it.

Prince William and his wife Kate left Pakistan Friday after a tour dramatically capped by a terrifying mid-air plane drama which saw their Royal Air Force pilot abort two landings in a fierce thunderstorm over Islamabad.

The turbulence from the Thursday evening storm during the flight from Lahore to Islamabad shook the plane so hard that seasoned foreign correspondents said they had never experienced anything like it.

"It was pretty bumpy up there," the Daily Mail's royal correspondent, Rebecca English, quoted the Duchess of Cambridge as saying.

"If I'm honest ... that was the most nervous I've ever felt in a plane," said ITV royal correspondent Chris Ship, who was on board.

The pilot of the RAF Voyager reportedly tried to land twice, once at a military base in the garrison city of Rawalpindi adjacent to the capital, and once at Islamabad International.

But the storm, one of the many squalls that often hit Islamabad in October, proved too powerful.

"The pilot circled for an hour but the lightning - and turbulence - was so bad we had to fly back," tweeted English late Thursday.

With the plane grounded in Lahore, some 270 kilometres (170 miles) from Islamabad, the UK High Commission had to rush to secure hotel rooms for the Prince, his wife -- and the roughly 100 people accompanying them, according to the travelling press.

With security one of the top concerns throughout the trip, it was no small feat.

But after a night at a five-star hotel in Lahore, the entourage was able to return to Islamabad Friday morning, just in time to visit an army centre in Islamabad where dogs are trained to sniff out explosives.

Thursday's mid-air drama did not appear to dampen the royal couple's spirits, with the press pack reporting that William -- himself a pilot -- had joked with them shortly after that he had been the one flying the plane.

There has been no statement yet from Kensington Palace on the flight drama.

A planned trip to the famed Khyber Pass -- one of the two major border crossings into Afghanistan -- was called off after the flight drama.

The couple -- the Duchess wearing one final shalwar kameez in black and white, after highlighting the traditional Pakistani long tunic and trousers throughout the trip -- then boarded the Voyager once more, waving for the cameras one last time before departing.

It was Cambridge's first official trip to Pakistan, and a significant vote of confidence from the UK in the country, which has seen a dramatic improvement in security in recent years.

No British royal has visited Pakistan since William's father Prince Charles and his wife Camilla came 13 years ago, just as Pakistan was plunged into the worst of its long, bloody battle with militancy.

The army intensified a crackdown on militants in 2015, however, and since then the violence has dropped dramatically, though analysts still warn that Pakistan has not yet addressed the root causes of extremism.

The Cambridges spent their five-day tour promoting causes such as girls' education, conservation and climate change awareness while winning praise for their tributes to Pakistani designers and huge smiles as they took part in each event.

The palace had called the trip their "most complex" tour to date as the couple sought to boost ties between Britain and the second-largest country in the Commonwealth.

William's mother, the late Princess Diana, charmed Pakistanis on her own visits to the country two decades ago, and nostalgia for her lay heavy over the trip, both for Pakistanis and for Britons watching from home.

Pakistani press repeatedly flashed archive photos of Diana on her visits, comparing her to Kate.

The couple also met with Prime Minister Imran Khan, an old friend of Diana's, and visited the cancer hospital he founded which she had helped raise funds for.